In the chemical vapor deposition method, the gas phase constituents react at a surface to be deposited. The process is limited by the substrate temperature which is the only source of energy to promote surface chemistry. Plasma enhanced chemical vapor deposition (PECVD) offers enhanced deposition rates at reduced substrate temperature since the reactants are in the form of plasma. Energetic electrons in the plasma activate the CVD process as opposed to thermal energy associated with conventional CVD. This process is most suitable for depositing good uniformity thin films of silicon nitride, amorphous silicon and microcrystalline silicon on different substrates such as optical glass, silicon, quartz and stainless steel.

Depending on the type of plasma, PECVD reactors are classified as either direct or remote systems. In the direct PECVD method, the plasma excitation of all the reactant gases (SiH4, Cl2, SF6) and any inert gas (Ar) takes place in the reactor where substrate is kept. This means the substrate is also immersed within plasma. A main disadvantage of the direct PECVD reactor is that there can be near surface damage due to ion bombardment, which increases the recombination rate in the affected region. In the later technique, plasma of the reactant gases and any inert gas is generated remotely. The active species are extracted and transported to a plasma free region where they are mixed and reacted with additional reactants to form precursor molecules. The film is deposited on the (heated) substrate kept in plasma free region. 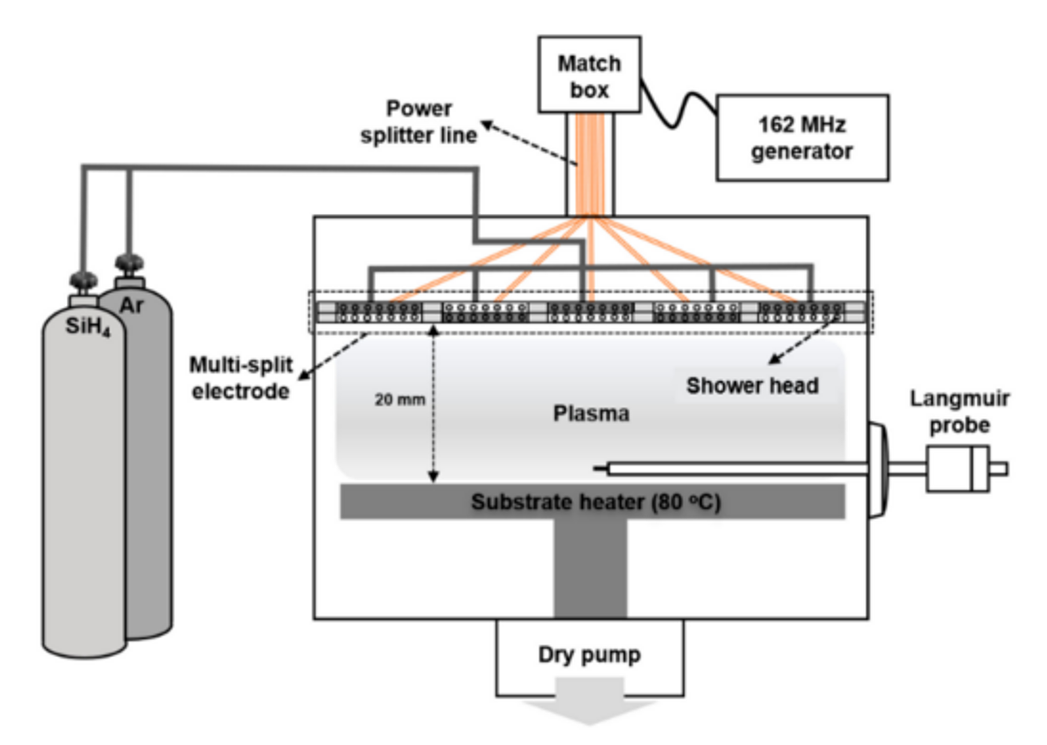 The well stablished technology of PECVD uses RF power source to excite plasma. In the RF-PECVD process, deposition is achieved by introducing reactant gases between a grounded electrode and an RF-energized electrode. The capacitive or inductive coupling between the electrodes excites the reactant gases into plasma, which induces a chemical reaction and results in the reaction product being deposited on the substrate. Other variants are also available where DC and microwave sources are used to energies the plasma in PECVD reactor. Few advantages of PECVD process are