These thrusters utilize radio frequency (13.56 MHz) antenna to generate high density plasma of the propellant gas say xenon, krypton, iodine and argon. When the antenna type used is Helical, it is named as helicon thruster particularly. This plasma is accelerated through a magnetic nozzle to produce thrust. The simple construction, operation flexibility and large thrust to mass ratio makes these systems very attractive.

Figure 1 demonstrate a propulsion system developed by ThrustMe that uses iodine propellant and has been tested in-orbit. Iodine enables substantial miniaturization, and the total mass (including propellant) and volume of the system are 1.2 kg and 96 mm × 96 mm × 106 mm, respectively. Iodine plasma is produced with a radio-frequency inductive antenna. The positive plasma ions are extracted and accelerated by the grids to high speeds (about 40 km s−1) to produce thrust. A cathode filament downstream of the grids thermionically emits electrons to charge neutralize the ion beam.

Figure 2 shows the prototype Helicon thruster called HPT05M prototype, developed together by UC3M and SENER Aeroespacial. It is composed of a single solenoid which generates an axisymmetric convergent-divergent magnetic field and a dielectric tube made of quartz, 30 mm inner diameter, 1.5 mm thick, and 150 mm long. The tube is axially aligned with the magnetic field. Around the tube, there is a half-turn right-hand polarized helical antenna to produce helicon plasma. One end of the tube allows to inject the working noble gas (Xenon, Krypton or Argon) and plasm exhausts from the other end to produce the thrust. 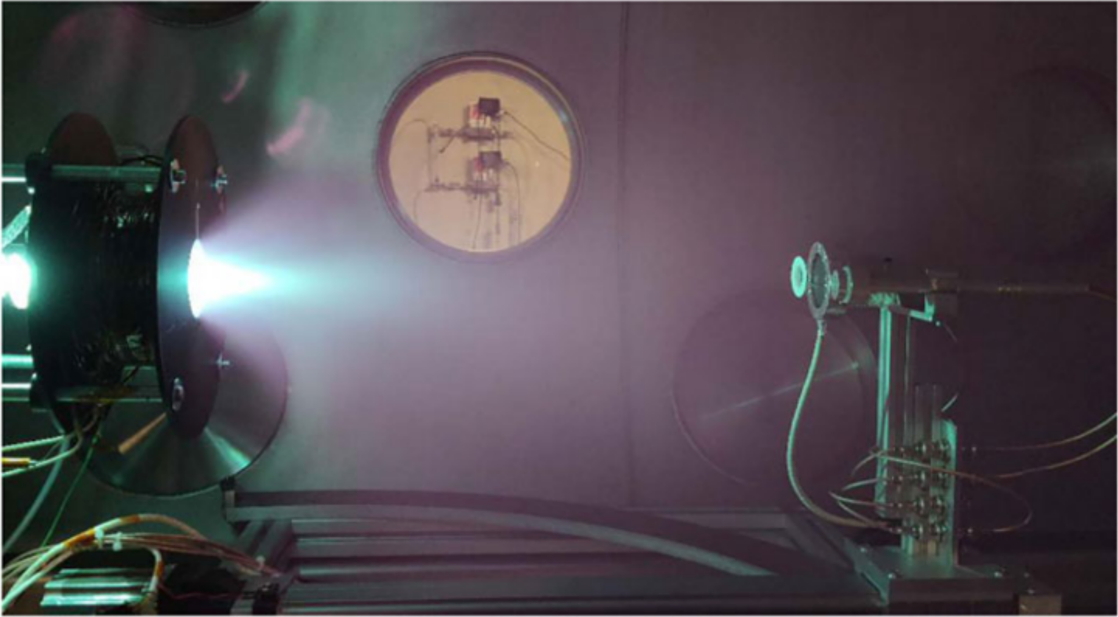