A Semion retarding field energy analyzer (RFEA) was placed at the substrate position 80 mm below the target to measure the ion velocity distribution function (IVDF). The Semion consists of a series of grids behind the sampling apertures and is terminated by a collector plate, as illustrated in fig 2. 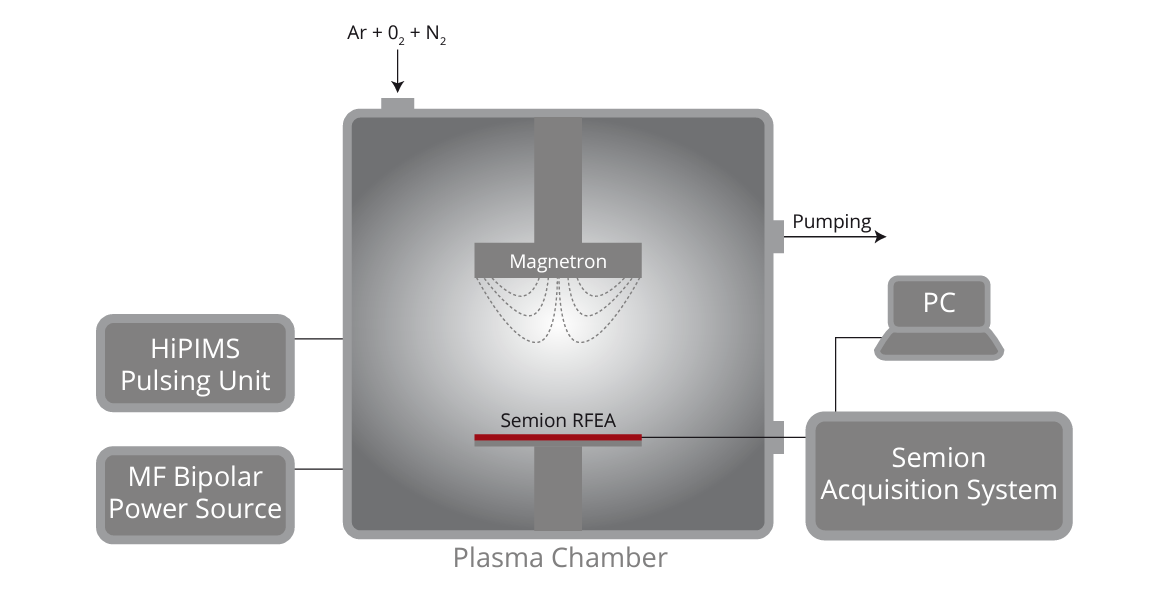 The Semion was positioned so that the entering apertures faced upstream. The orifices measured 800 µm in diameter and allowed ions enter the RFEA for analysis. Under a series of assumptions, the ion velocity distribution, f(v), was calculated from the first derivative of the current–voltage characteristic using the following equation:

In this equation, m represents the mass of ions, Pg is the total geometrical transparency of the grids, A0 is the open area of the entrance orifice, e denotes elementary charge, Ic is collector current, and Φ is the discriminator voltage. In our case, the measured Ic is the total sum of all ion contributions. The four graphs below depict the typical discharge voltage and current waveforms for both pure HiPIMS and hybrid HiPIMS + MF magnetron during selected experiments:

A. A pure HiPIMS in an Ar atmosphere 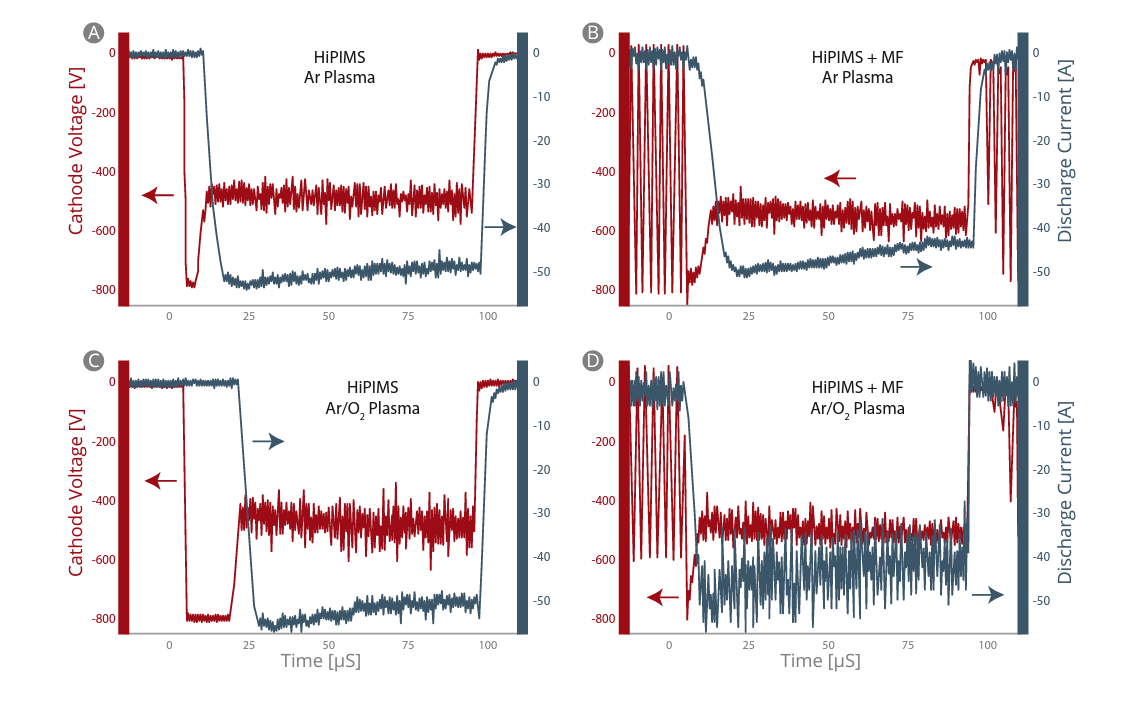 The first graph below illustrates the time-resolved, normalized total ion flux on the substrate for various plasma conditions. Although there is no significant shift between the HiPIMS and HiPIMS + MF signals in an inert Ar atmosphere, in a reactive atmosphere, the difference between the two is consistently about 20 µs. 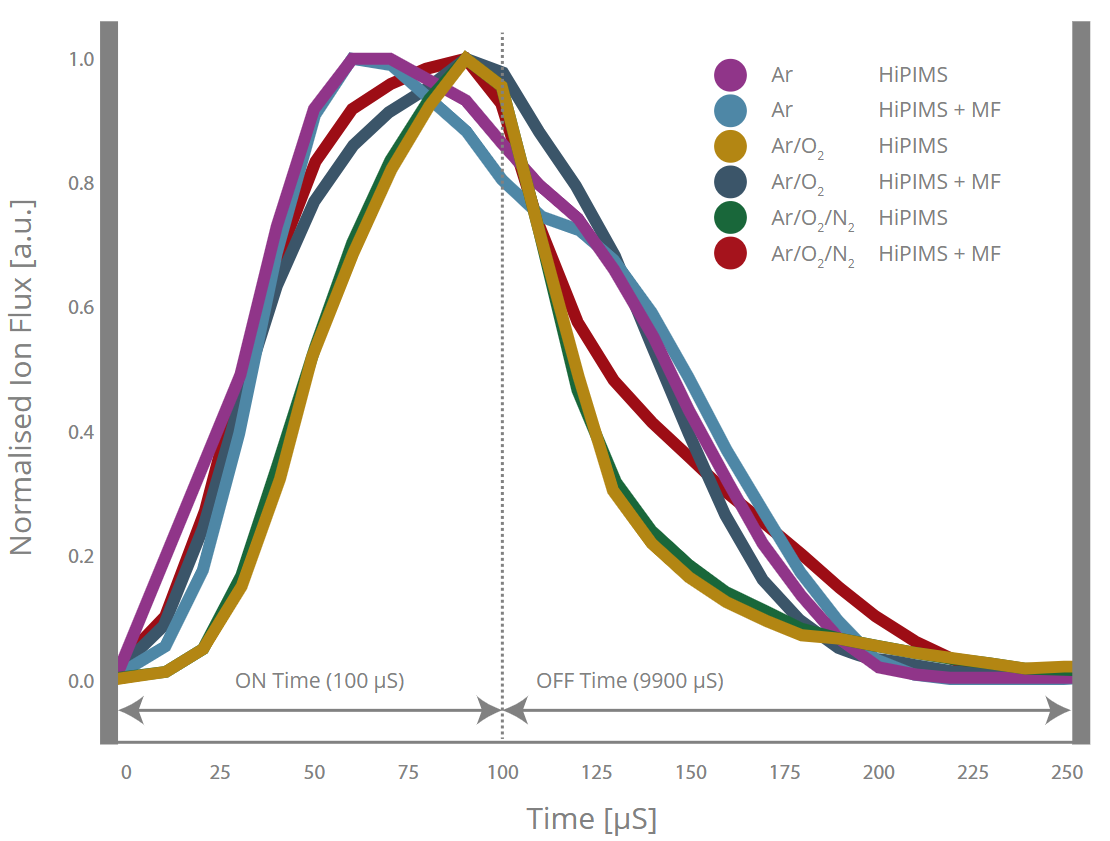 The next graph below shows time-averaged IVDFs for various gas mixtures and excitation modes. There are two findings from this graph: ion energy is the highest for an inert Ar plasma, and in a reactive plasma, the IVDF maximum is shifted upward by about 5 eV for HiPIMS + MF excitation relative to pure HiPIMS magnetron. 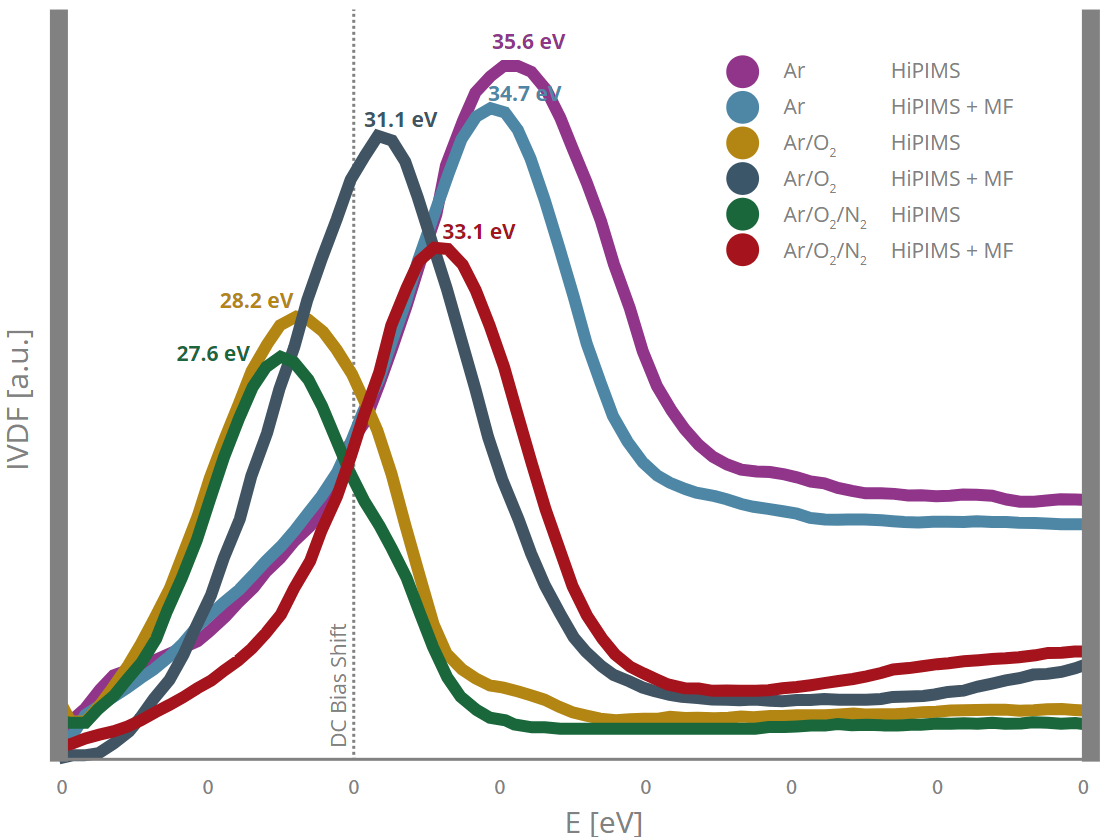 Figure 5: Time-averaged IVDFs in the range of 20 to 55 eV for different gas mixtures and discharge excitation modes. Open symbols represent the pure HiPIMS mode, while solid symbols correspond to the HiPIMS + MF magnetron.

HiPIMS + MF excitation in a reactive atmosphere was also found to effectively reduce the delay between the edge of cathode voltage and current onset. In addition, HiPIMS + MF was found to be best for the deposition of crystalline TiO2 on polycarbonate foil thanks to the low heating flux on the substrate and suitable plasma parameters leading to the formation of the rutile phase.

Uses of the study

These findings were especially significant for pulse plasma formation in the presence of reactive gases, as the delay between current pulse and applied voltage was about 20 μs faster for HiPIMS + MF than for pure HiPIMS.