Laboratory plasmas are widely used in materials processing to impart desirable surface properties, without changing the bulk characteristics of the material. One technique of particular interest is plasma polymerization, in which the surface is exposed to complex organic vapor plasma, resulting in the formation of a polymetric coating. The objective is to develop a model of an asymmetric capacitively coupled plasma (CCP) then validate the model through the use of a non-invasive Impedans Octiv Suite 2.0 VI probe for various gases, RF powers and inter-electrode distances.

A schematic of the capacitively coupled reactor used to perform the plasma treatment and produce the plasma polymers is shown in figure 1. The electrodes are 28 cm in diameter and contained within a 30 cm diameter, 25 cm long earthed stainless-steel chamber. The 13.56 MHz power (2-50 W) was applied via a tuneable matching network, which contained a blocking capacitor. The working gas pressure for plasma polymerization experiments is generally between 0.5 and 3 Pa and a representative pressure of 1 Pa was used throughout these experiments. The inter-electrode distance can be adjusted from 4 to 22 cm. Since the plasma extends to the radially earthed walls, the earthed area in contact with the plasma is always greater than the powered electrode area causing the discharge to be asymmetric.

Figure 1. Schematic of the experimental setup

The self-bias voltage and the ion flux are measured using an Impedans Octiv Suite 2.0 VI probe inserted between the matching network and the live electrode. The Octiv probe gives a measure of the Ion flux by monitoring the current and voltage waveforms. When the sheath voltage on the live electrode is at a minimum, then the electron and displacement currents are both negligible and therefore the only contribution to the current is from the ion flux.

The self-bias, which appears on the live electrode, was measured in Argon as a function of inter-electrode distance, at nominal (as measured by the RF generator) power and plasma power (measured by the Octiv probe). 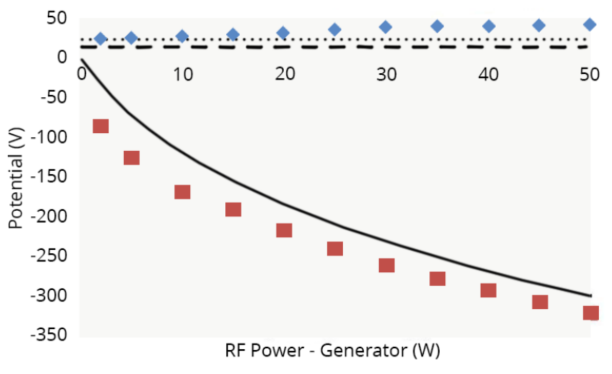 Figure 2. Self-Bias volage as a function of Generator power in an Argon plasma for an inter-electrode separation of 22 cm using the Octiv VI probe. Solid line represents the results of the asymmetric model.

Figure 2 shows the Self Bias voltage measured in an Argon plasma for an inter-electrode separation of 22 cm as a function of the generator power and compares it vs the model (Q ≈ 4, Z = 50 Ω, kTe ≈ 3 eV).

Figure 3 shows the ion flux (μi) for an argon plasma as a function of the RF power for an inter-electrode distance of 22 cm. The ion flux increases approximately with the square root of the deposited RF power as expected for a capacitively coupled system. The agreement between the model and the experimental data shows that the asymmetric model simulates the reactor appropriately. The model is as follows, μi= ηsheath uB, where uB= √(kTe/M) is the Bohm velocity and ηsheath is the plasma density at the edge of the sheath and is described as:

Where Ec, Ee & EPdc are the energy lost per ion-electron pair, twice the electron temperature and 0.4 Vlive respectively. Fig 4 shows the self-bias potential, ion flux and plasma power measured using the Octiv VI probe for an inter electrode separation of 22 cm and a constant gas pressure of 1 Pa for a variety of gases including organic vapors.

The results of the Self-bias shows only a slight variation for different gases at low powers where most functionalized coatings are produced. However, even at high relatively high powers the differences are still not great. The behavior of the plot at low powers is reproduced for a separation of 11.5 cm (not shown) but the plots diverge for powers above 10 W. The ion flux measurements show large deviations when plotted against the plasma power. 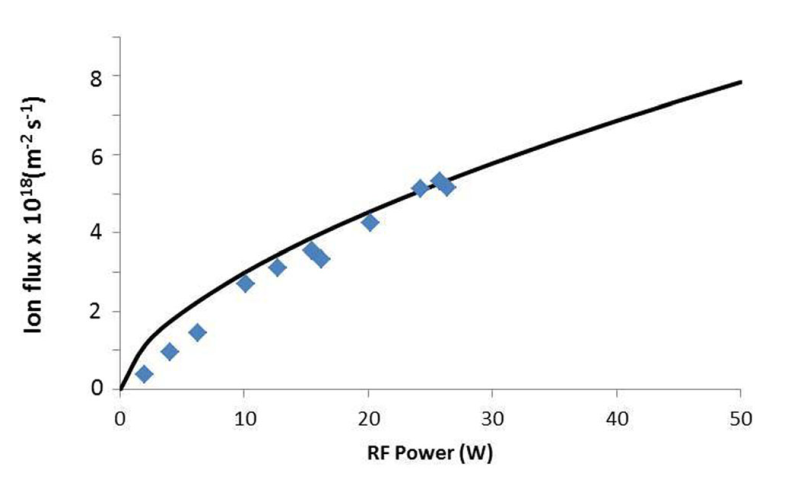 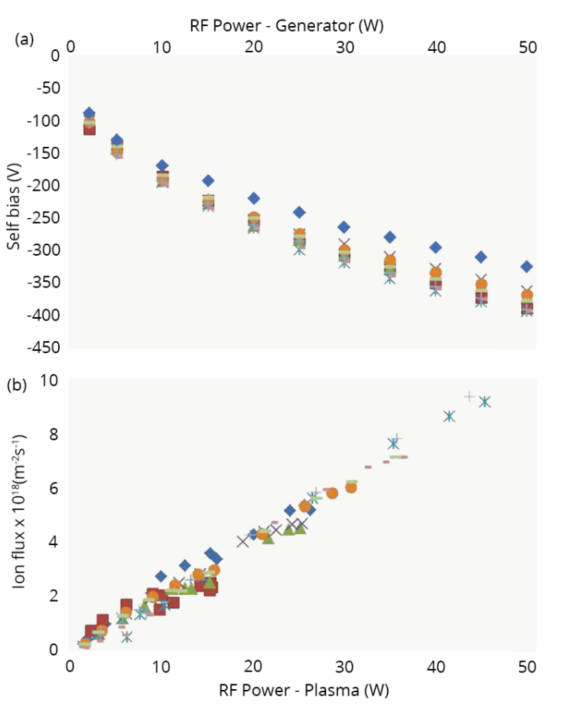 The ion flux measurements appear to be independent of the gas used (at least for the gases tested here) and are dependent on the plasma power only. Figure 5 shows the RF power transferred into the plasma as a function of the RF power for a variety of gases. At low power, the transfer efficiency for all three gases are comparable, however, once the power goes above 10 W, the transfer efficiency begins to depend on the gas used. At 50 W, oxygen is only 30% efficient at transferring the power, while Allylamine is 90% efficient under the same conditions, with the matching network being run such that the reflected power is close to zero. 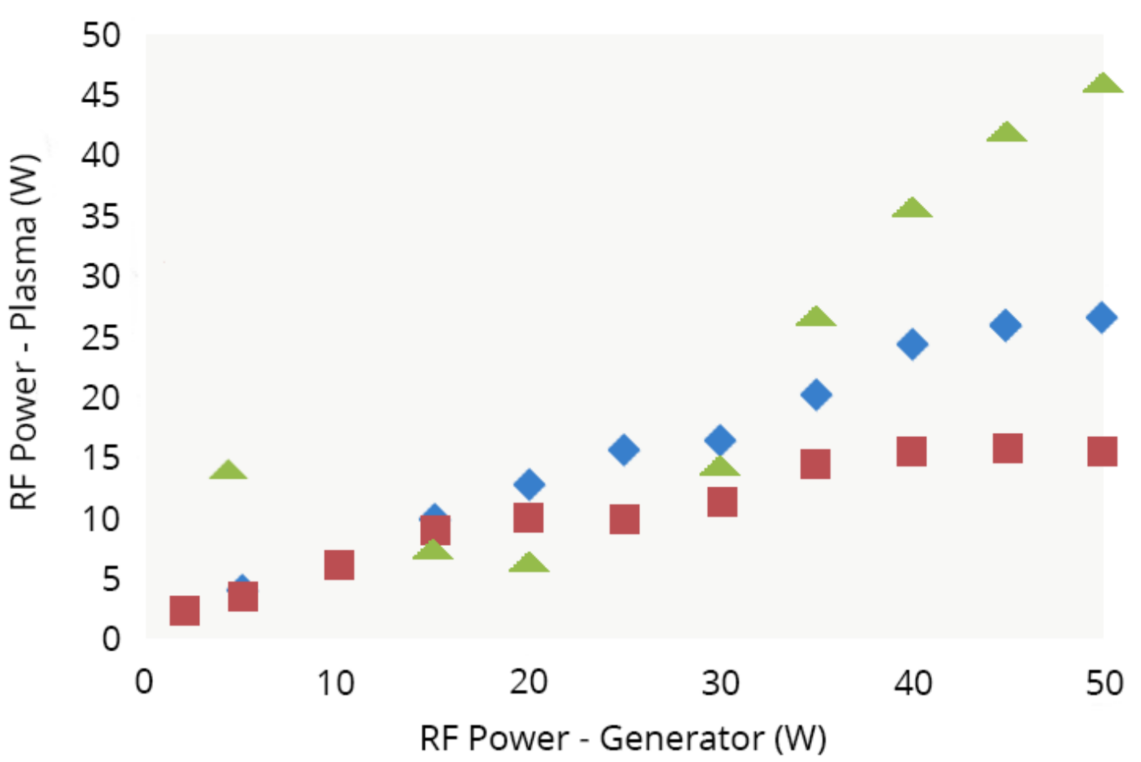 This is expected due to the nature of the gases, with oxygen forming an electronegative plasma while allylamine forms an electropositive plasma. Using the Octiv probe. The phase between the RF voltage and current changes with the gas used, indicating that the bulk of the plasma electrical characteristics change.

We found good agreement between the experimental data and the model of the Argon plasma in an asymmetric, large inter-electrode separation, CCP system.

We also found that, if the power deposited into the plasma is measured rather than relying on the RF generator power, the model can be used for other gases. The power transfer efficiency is strongly dependent upon the gas chemistry, with strongly electronegative gases (i.e. Oxygen) having much lower transfer efficiencies than electropositive gases (i.e. Allylamine). The Ion flux however is seen to be independent of gas chemistry for a given plasma power.