Radio frequency (RF) discharges, microwave discharges and dielectric discharges are employed in various applications such as surface etching, surface modifications and film deposition. RF plasma discharges tend to be more controllable in terms of ion and electron densities – which generally regulates the chemistry during plasma processing. In RF plasma processing, favourable uniformity is commonly achieved along with exceptional stability. Capacitively coupled RF plasma discharges are frequently employed for various types of processing but have certain mode transitions that occur at different power levels and gas pressures that are not fully understood.

To investigate these mode transitions in more detail it is important to establish the key plasma parameters such as electron temperature, the plasma density, and the electron energy distribution function (EEDF). As the RF power is increased, a change is observed between the low current α (low RF power) mode to high current γ mode (high RF power). At low gas pressure, the electrons indicate a bi-Maxwellian type EEDF typical of the collisionless stochastic heating mode while at high gas pressure the EEDF is Druyvesteyn or Maxwellian typical of the collisional Ohmic heating mode. A transition is noticed between these electron heating modes as a function of the gas pressure. The desired plasma density and ion impact energy can be obtained by controlling the RF driving frequency and power level. 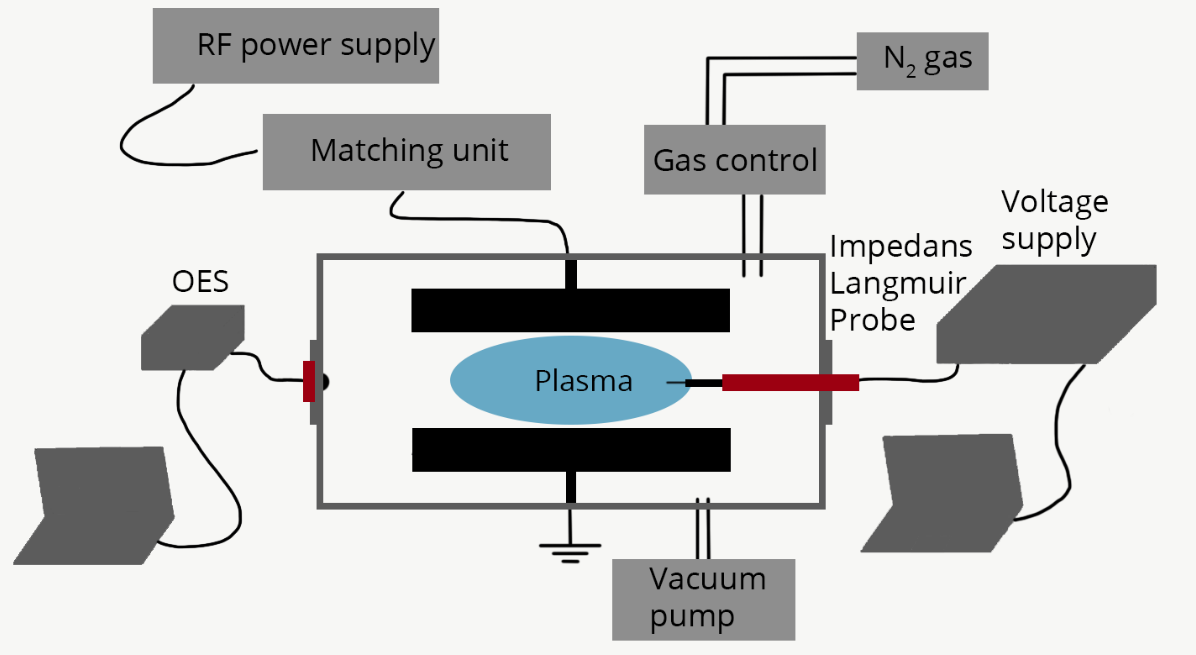 While 13.56 MHz is the most commonly used frequency, higher frequencies have begun to be used for various applications in recent years due to evidence of better control of the plasma density as well as the ion flux. The driving frequency strongly impacts the chemical reactions between the active plasma species due to its impact on the dissociation, excitation, and ionization rates. Therefore, understanding the influence of the driving frequency is necessary for determining the physical and chemical properties of RF plasma processing. Hence in this study, nitrogen plasma characteristics are investigated in a capacitively coupled radio frequency plasma driven by two different exciting frequencies of 13.56 MHz and 40 MHz.

Nitrogen is a commonly used gas for certain types of plasma process. The Langmuir Probe diagnostic along with optical emission spectroscopy have been reported previously at the exciting frequency of 13.56 MHz. However, there is insufficient literature at 40 MHz. 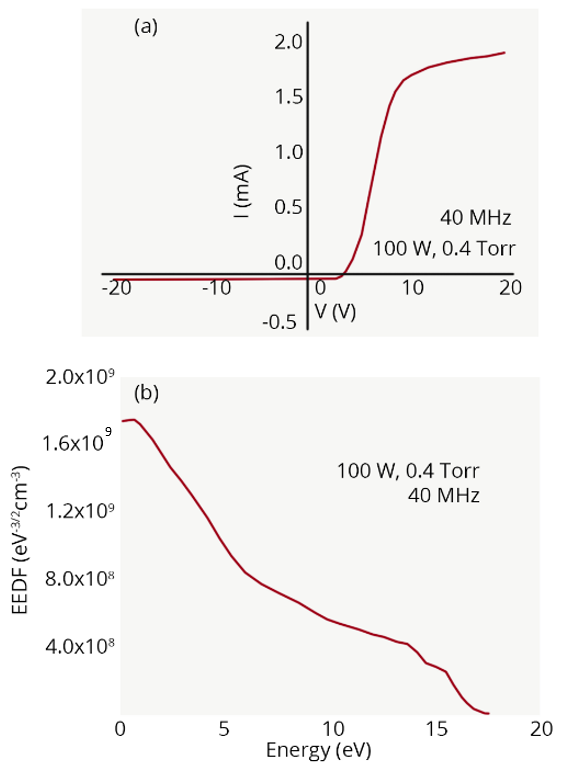 A previous study by Abdel-Fattah et al investigated the effects of driving frequency changing between 13.56 MHz and 50 MHz, their work is done at limited pressure values (0.06, 0.1, and 0.2 Torr) and at a fixed voltage of 140 V. While this study includes a parametric scan of the RF input power from 25 W to 200 W with an increment of 25 W and the gas pressure from 0.1 Torr to 1 Torr with an increase of 0.1 Torr. Optical emission spectroscopy is performed to characterize the variation of the vibrational temperatures corresponding to the N2 second positive system (C3Πu− B3Πg) and the N2 + first negative system (B2Σ+u − X2Σ+g). The vibrational temperature is associated with the concentration of the vibrational excitation particles depending on the electron energy loss. The vibrational temperature plays a vital role in defining the shape of the EEDF. A single Langmuir probe is used to measure the electron temperature and the electron density of the nitrogen plasma discharge. All results are discussed in detail.

The experimental setup consists of a capacitively coupled RF plasma discharge system including two parallel stainless-steel electrodes. The diameter of the electrodes is 20 cm, and the electrode distance is 3 cm. Two RF power generators (13.56 MHz and 40 MHz) supply power through a matching network. RF input power is applied to the upper electrode, and the lower electrode is grounded as shown in Figure 1. The optical emission of the plasma discharge is measured using an optical emission spectrometer. It is a high-resolution miniature UV-Vis broadband fiber optic spectrometer. The current – voltage (I – V) characteristics of the discharge is measured using an Impedans Langmuir Probe System. The probe consists of a tungsten wire with a diameter of 0.4 mm and a length of 10 mm which is inserted into the plasma discharge. The system has a computer controlled voltage power supply with a maximum scan range of -150 V to +150 V and the resolution of the data acquisition is 4.5 mV for the voltage and 4.5 nA for the current. 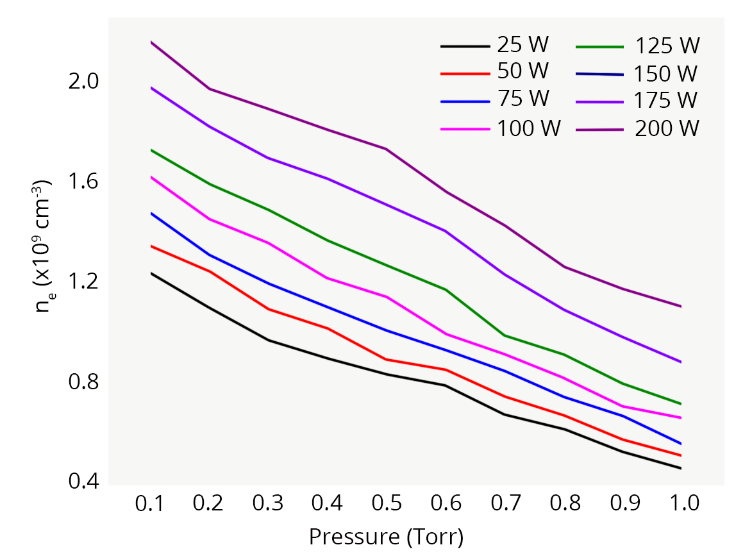 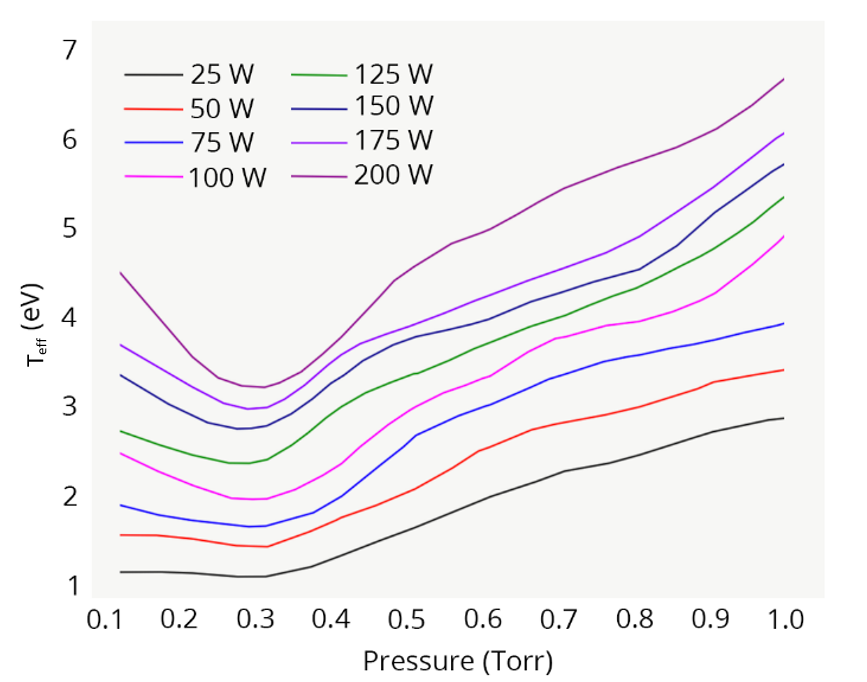 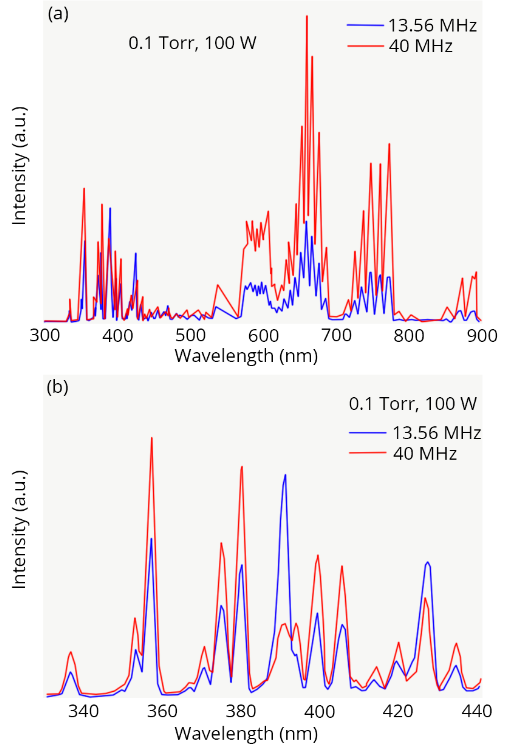 The emission of N2 plasma is captured using optical emission spectroscopy with a range of wavelengths between 300 nm and 900 nm (figure 5a). This technique is a non-invasive and an extremely sensitive way to determine the atomic and molecular species obtained in the plasma discharge. Different vibration transitions (ν’ -> ν’’) are observed at the line bands of 337.1 nm, 353.0 nm, 357.7 nm, 366.8 nm and 399.8 nm are shown in figure 5b. Also, the vibrational temperature of N2 is estimated using the Boltzmann plot method which is shown in figure 6.

This study focuses on the characterization of a nitrogen capacitively coupled plasma discharge produced with two different frequencies of 13.56 MHz and 40 MHz using a Langmuir probe and optical emission spectroscopy. 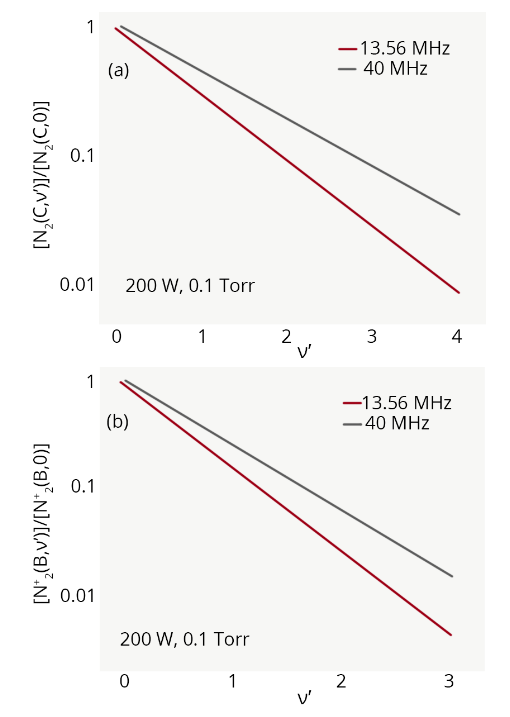 This study aims to interpret nitrogen plasma discharges at 40 MHz and compare the results with 13.56 MHz discharges, which has not been studied previously in literature using these diagnostics. The electron density ne, the effective electron temperature Teff, and vibrational temperatures of N2 and N2+ are calculated for different RF input powers and gas pressures. The results show that increasing the RF input power causes a transition from the α-mode to the γ-mode. Between 0.1 Torr and 1 Torr the effective electron temperature Teff decreases up to a certain pressure value and then increases steadily. This behavior is correlated to the transition from a bi-Maxwellian or non-Maxwellian type EEDF corresponding to collisionless stochastic heating mode to a Druyvesteyn type EEDF corresponding to collisional Ohmic heating mode into the bulk plasma – which occurs at 0.3 Torr for 13.56 MHz and 0.2 Torr for 40 MHz. The calculated vibrational temperatures of N2 and N2+ have a gradual decrease after 0.3 Torr for 13.56 MHz and 0.2 Torr for 40 MHz due to the reduction of the relative population of N2 (C3Πu) and N2+ (B2Σ+u) states. The results of Langmuir probe diagnostics are in a good agreement with the optical emission spectroscopy measurements.