Hall thrusters which are used for in-space propulsion of telecommunications satellites, require the use of external emissive cathodes. These act as a source of electrons for the ionization of the neutral gas propellant along with the downstream neutralization of the resulting ion beam. Increased thruster development efforts have contributed to further research into cathodes, known to be the lifetime limiting factor for Hall thrusters. Emissive cathodes are subject to bombardment and erosion by accelerated ions. Understanding the complex cathode physics and its influence on thruster operation requires reliable diagnostics for particle properties.

The Langmuir probe is a diagnostic system that has long been used for the characterization of different cathode plasmas. The shape of the VI characteristic obtained from the probe tip inserted into the plasma is used to extract the electron density and temperature along with other parameters such as the floating and plasma potentials

The cathode was tested under vacuum in a 1.8 m long by 0.8 m diameter stainless steel vacuum vessel with an operating pressure below 4 mPa for all cathode discharge operating conditions. The cathode considered here features a thermo-emissive LaB6 pellet (disk 8 mm in diameter, reduced to 6 mm due to internal body architecture, and 2 mm thick) heated by a tungsten filament, to supply the electrons to the discharge. 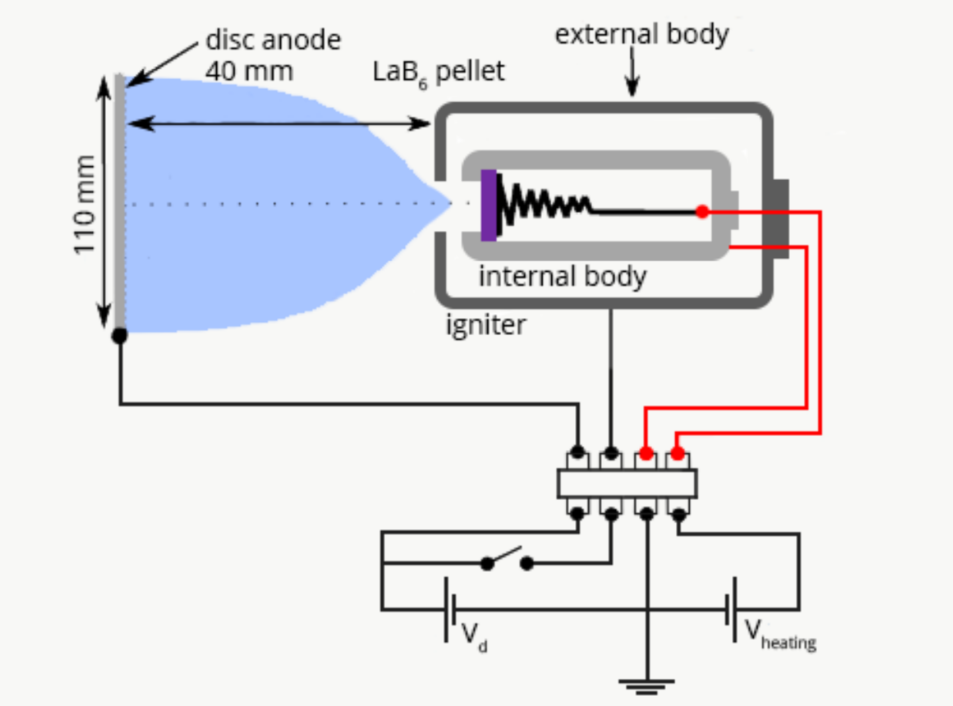 The cathode is operated over a range of discharge currents (2 – 16 A) and Xenon flow rates (0.2 – 0.8 mg/s). The results presented here relate to the cathode discharge operating in ‘spot’ mode, which is associated with higher electron densities and lower electron temperatures compared to the alternative ‘plume’ mode.

Langmuir probe measurements were performed with a single cylindrical probe tip, made of 0.1 mm diameter tungsten and 1 mm in length. The measurements were performed on the cathode axis, with the probe orientated parallel to the plume. The acquisition of the VI characteristics was achieved with an Impedans Langmuir Probe System, with the Druyvesteyn method being used for the analysis of the VI characteristics. 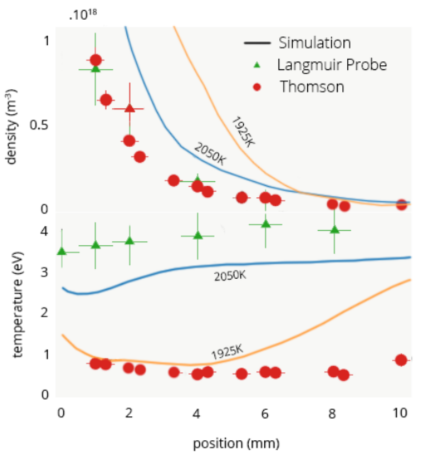 Figure 2. The electron density and temperature as determined from a Langmuir probe, Incoherent Thompson Scattering and through a fluid model.

In figure 2, allowing for measurement uncertainties, the electron density obtained from a Langmuir probe and Incoherent Thompson Scattering (ITS) are in good agreement. This agreement does not extend to the electron temperature however with the Langmuir probe giving a temperature four times higher than that given by the ITS with the discrepancy potentially being due to a number of factors.

One potential reason for the difference may be due to the change in the discharge mode when the probe was inserted and polarized inside the plasma. When the probe was inserted and kept inside the discharge, large discharge voltage oscillations were observed. These fluctuations, as large as 5 V, were observed when the probe was placed at distances of 10 mm or less from the orifice. This significant perturbation strongly suggests that the insertion of the probe was associated with a change of the cathode regime, which would account for the higher electron temperatures measured by the Langmuir probe. However this change of mode is normally associated with a decrease in the density which is not observed.

Another potential explanation for the discrepancy between the probe and the ITS measurements is the directional sensitivity of the ITS which the Langmuir probe does not have. Due to the axial electric field and low collisionality of the plasma outside the cathode orifice, a non-isotropic electron temperature can be expected with a higher electron temperature along the electric field direction. In order to determine if this was the case an ITS measurement with an axial probed wave vector is required which was not possible here due to the availability of viewing ports. Finally, the Druyvesteyn method assumes a Maxwell-Boltzmann EEPF. Deviations of the EEPF from this distribution may contribute to the discrepancy.