This study looks at the characterization of a HiPIMS plasma using a process compatible plasma measurement probe which can be used in situations which require measurements at a fast time resolution, where in some cases the application may be depositing insulating layers.

In the following, the plasma measuring setup is described, including the reactor for the plasma and the measuring probe. A layout of the setup is shown below.

Figure 1: Layout of the measuring setup with the plasma chamber shown from above, the Plato probe and Plato control. The length of the ITO target is 0.55 m and the diameter about 0.15 m

The plasma was generated and measured in a SV 470 industrial sputtering system from FHR Anlagenbau GmbH. It consists of four chambers, whereas the first is the load lock and the third is used for ITO deposition and the plasma measurements. The high power impulse magnetron sputtering (HiPIMS) process was driven by a SIPP 2000 HiPIMS generator from MELEC GmbH, which is able to support unipolar and bipolar pulses. In these experiments only unipolar pulses were used with a negative potential on the target. A 10 kW GX100/1000 DC power supply from ADL GmbH was used for charging the capacitors, whereas the maximum charging voltage is 1000 V.

As shown in Figure 1 a rotating, cylindrical indium tin oxide (ITO) target was used as the cathode. In the middle of the target a permanent magnet is installed. When the plasma is ignited it produces a racetrack of 0.53 m length and about 0.07 m width. The probe tip was installed in the middle of the chamber with a tip-to-target distance of 0.24 m. The vacuum was adjusted by a cryo pump which reached a base pressure of 3e-6 mbar in the chamber. The working pressure was adjusted to 5e-3 mbar using argon as working gas. 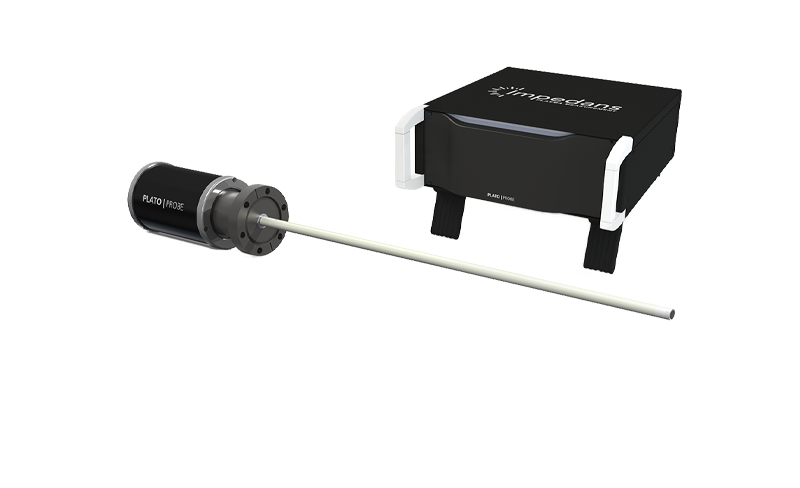 For measuring the plasma’s properties the Plato Probe from Impedans was used, shown in Figure 2. It is a Langmuir probe with a 3.3 mm diameter planar tip which is able to measure the electron temperature, ion density, ion flux and Debye length simultaneously. The advantage of the Plato probe over the conventional Langmuir probe is the ability to measure at high deposition rates and especially when depositing insulating materials on the probe surface. Thus several micrometers of film thickness on the probe should not influence the measured parameters. Furthermore, it is able to measure in different plasma conditions, as DC, RF, microwave, continuous and pulsed plasma.

The probe was mounted in the HiPIMS reactor, at a distance of 24 cm from the cathode, close to a position were a substrate sample would be. The probe’s tip was previously cleaned to ensure that no deposited material was present. Two silicon samples (10 mm x 10 mm) were placed next to probe’s tip, supported by an aluminum foil, and part of them was covered with a poly-imide tape. After all the plasma measurements, the tape was removed and the thickness of the deposited material over the silicon sample was determined with a Stylus profiler. This was done in order to ensure that the amount of deposited material in the probe’s tip would not interfere with the results.

The probe’s acquisition system is synchronized with the HiPIMS pulses by means of a trigger signal. By varying the acquisition time steps and the total measurement duration, information on the main plasma parameters can be acquired for different moments during the whole pulse period. Only pulse frequencies equal or higher than 500 Hz were used due to limitations of the Plato Probe measuring possibilities for lower frequencies.

Before the measurements, the probe’s base level was determined. This must be done since, when the probe is mounted in a reactor, there is a capacitive coupling between the probe and the surrounding walls which must be accounted before accurate measurements can be taken. In order to do this, a measuring scan was performed in the absence of plasma. A signal, as shown in Figure 3, is obtained due to stray currents flowing between the probe and the chamber walls and the software algorithm then calibrates the base level for this signal. After this, typical I-V curves and plasma parameters (electron temperature, plasma density and ion flux) were determined. 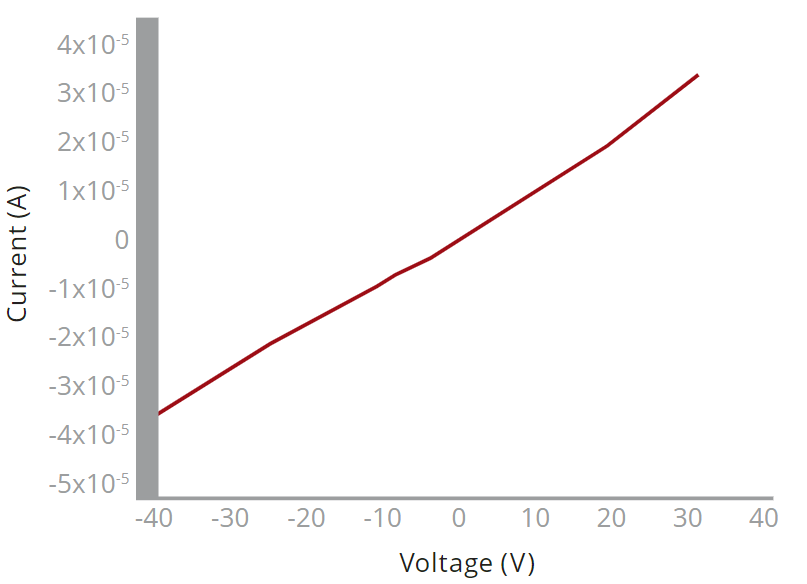 The following parameters were kept the same for all measurements: argon working pressure, 5 · 10ˉ³ mbar; charging voltage, 600 V and pulse on-time, 50 μs. Other parameters such as pulse off-time (frequency) and probe acquisition time steps were varied as shown in Table 1.

For the first three measurements, the influence of the acquisition time step was investigated in order to determine if there was any delay in the measurements related to it. The results are shown in Figures 4 to 6. 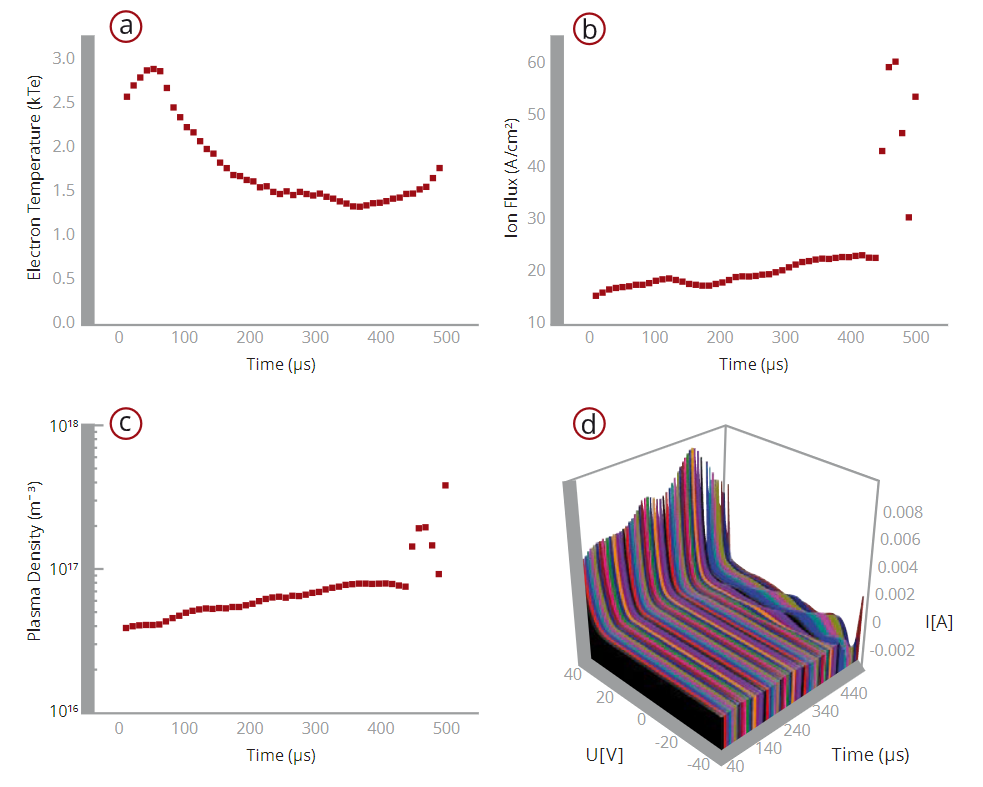 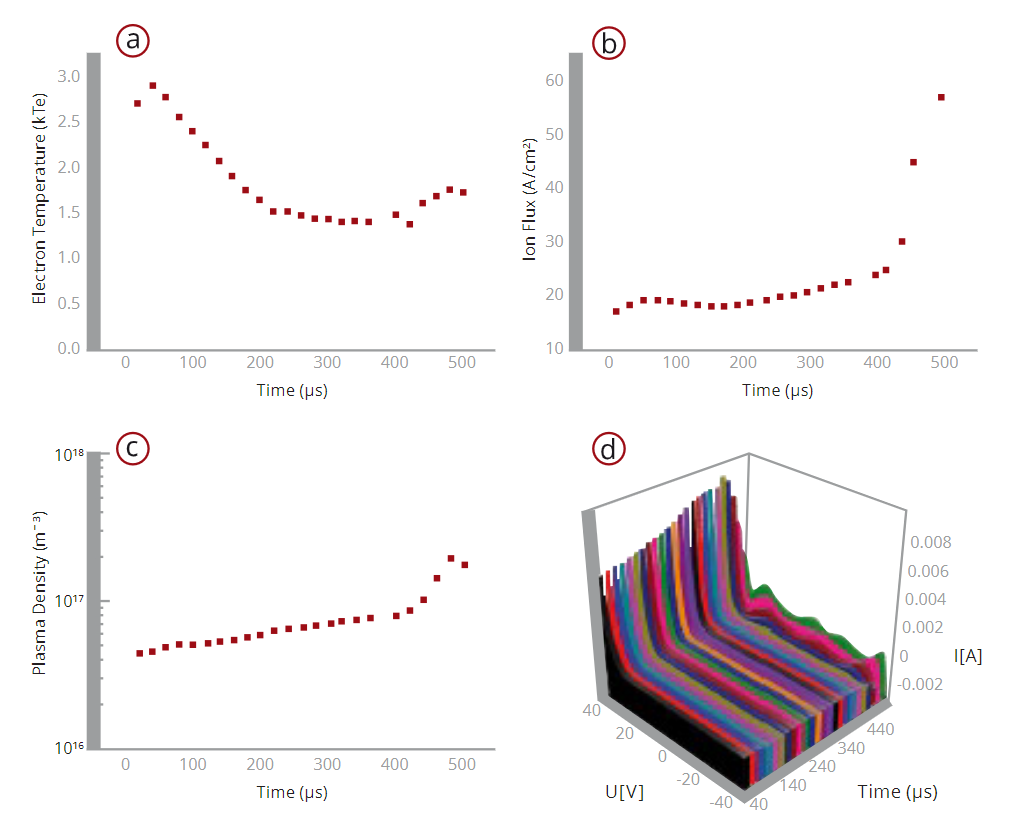 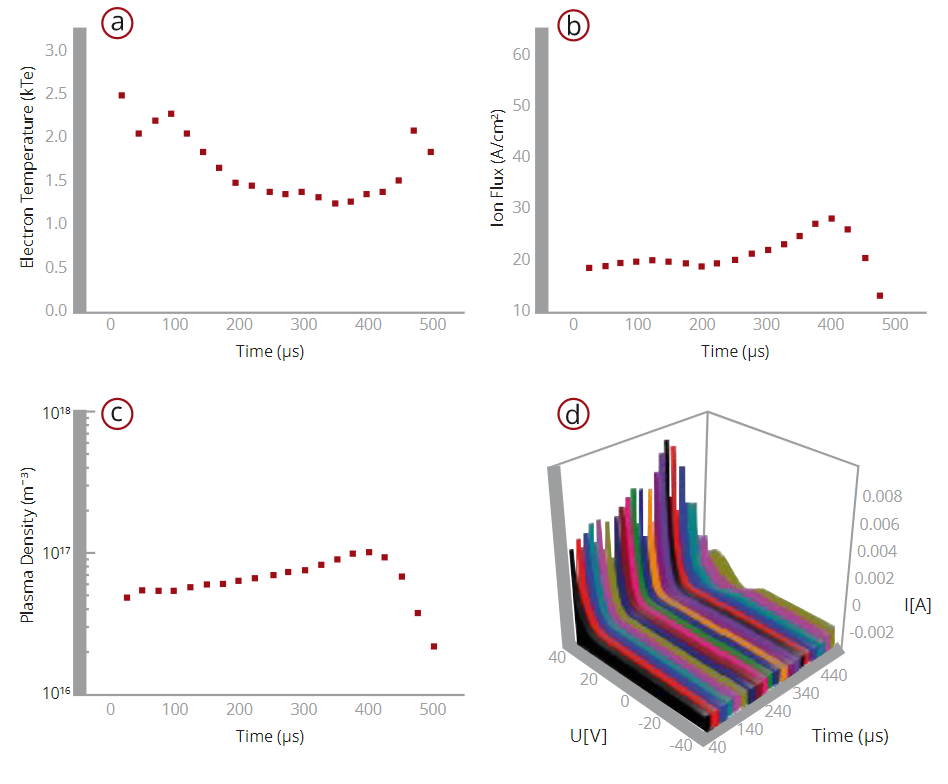 Pulse off-times from 450 μs to 1950 μs were also investigated in order to better understand the plasma behavior after the pulse is turned off. Plasma parameters are shown in Figure 7 and current profiles in Figure 8. 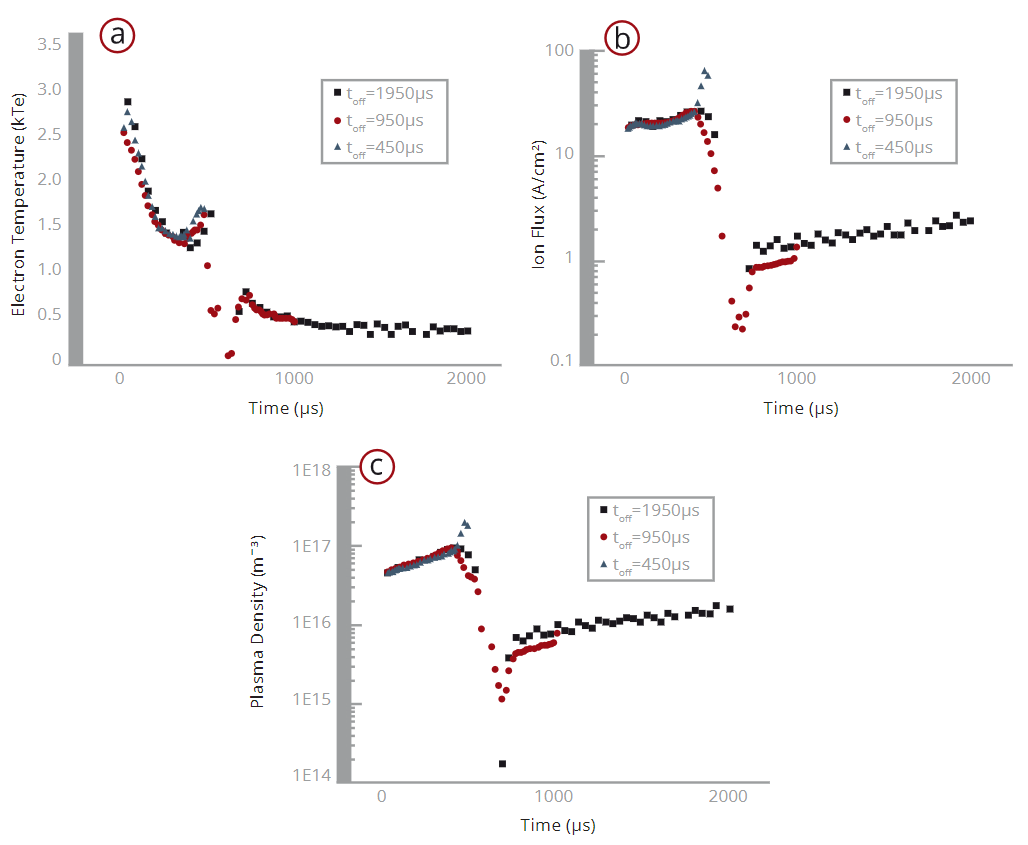 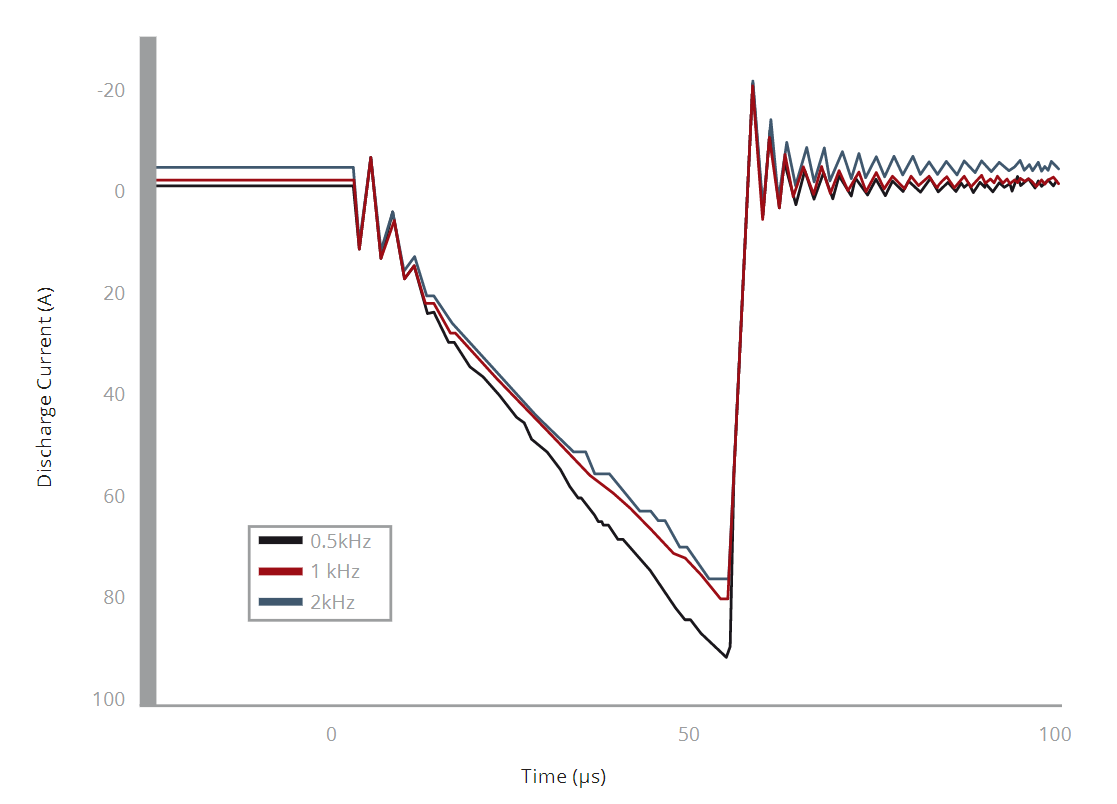