The authors present a study on the evolution of the etch profiles of nanopatterned SiO2 using a CHF3/Ar plasma process. The impact of substrate electrode temperature, chamber pressure and electrode forward power were examined. While the etch rate was lower at lower pressure, the pattern fidelity was higher. With higher forward power, the etch rate and anisotropy increases. As a result, the authors were able to optimize process conditions to achieve aspect ratio independent etching and high pattern quality at the same time.

For the plasma enhanced ALE process, an inert plasma is maintained throughout. Alternating cycles of deposition and etching are generated through alternating pulse injections of precursors and ion energy to the wafer, respectively. To deposit angstrom-thick layers on SiO2, fluorocarbon chemistry is used to provide the reactant adsorption. 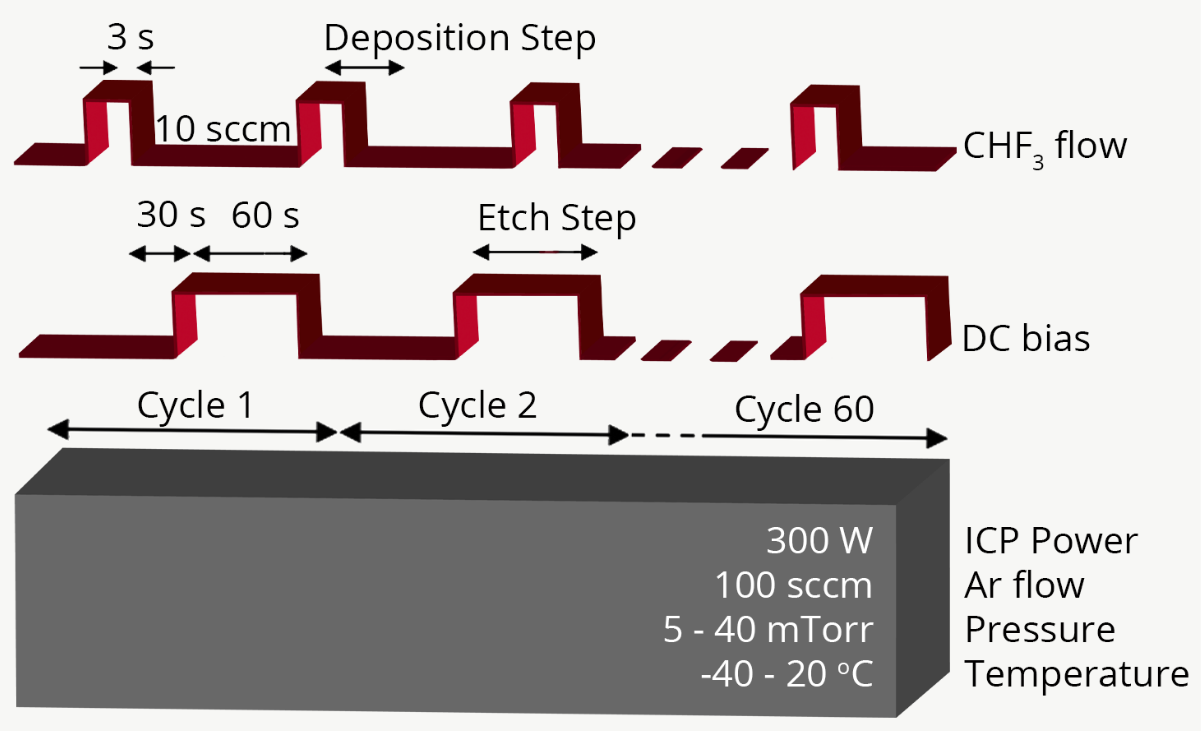 A fluorinated SiO2 mixed surface layer is formed and subsequently removed using low energy Ar ion bombardment. These ions are below the threshold for SiO2 sputtering and etching stops after the mixed layer is removed. This delivers the ‘self-limiting’ criterion needed for ALE processing. The fluorinated layers are regenerated through pulsed injection of CHF3 with unbiased substrate conditions. Once the layer is grown, a low level RF bias is applied to accelerate the Ar ions toward the substrate with maximum ion energy, but below the energy threshold for physical sputtering of SiO2. The sequence is repeated until the etched thickness is achieved.

The objective of this study was the optimization of SiO2 etching profiles for nanoscale-sized features (30-200 nm) during atomic layer etch patterning of SiO2 using CHF3/Ar plasma.

Figure 2. Schematic cross section of the etch profile including sidewall angle, degree of undercut and etching per cycle (EPC).

A series of experiments were conducted where only one plasma process parameter is tuned at a time, with the focus on pattern fidelity transfer and vertical side-wall fabrication quality. The important end results are:

1. At a temperature of -10 °C slow deposition rates are achieved along with directional transfer, vertical sidewalls and flat bottom surfaces.

2. The profile was improved at very low pressure, 5 mTorr.

A lift-off process was used for patterning of a Cr hard mask, firstly creating nano-sized lines on poly(methyl methacrylate) (PMMA) and using electron-beam lithography on Si wafers with a 250 nm SiO2 layer. The PMMA thickness was 60 nm and line width varied from 30 to 200 nm. A chromium (Cr) layer is then added. A lift-off process, followed by acetone cleaning in an ultrasonic bath was used to define the Cr lines. A Plasmalab System 100 ICP etcher was used to carry out the ALE process. 13.56 MHz power was applied to the substrate electrode to accelerate ions toward the substrate.

Figure 1 shows a schematic of the cyclic ALE process used, consisting of a repeating deposition step and etch step. The varied process parameters were the substrate temperature, forward bias power and process pressure. Ar gas flowed continuously at 100 sccm where the ICP power was held at 300 W. Periodical injections of 10 sccm of CHF3 were introduced for the deposition half-cycles. The forward bias power (FBP) supplied to the substrate electrode controls the ion energy at the substrate. 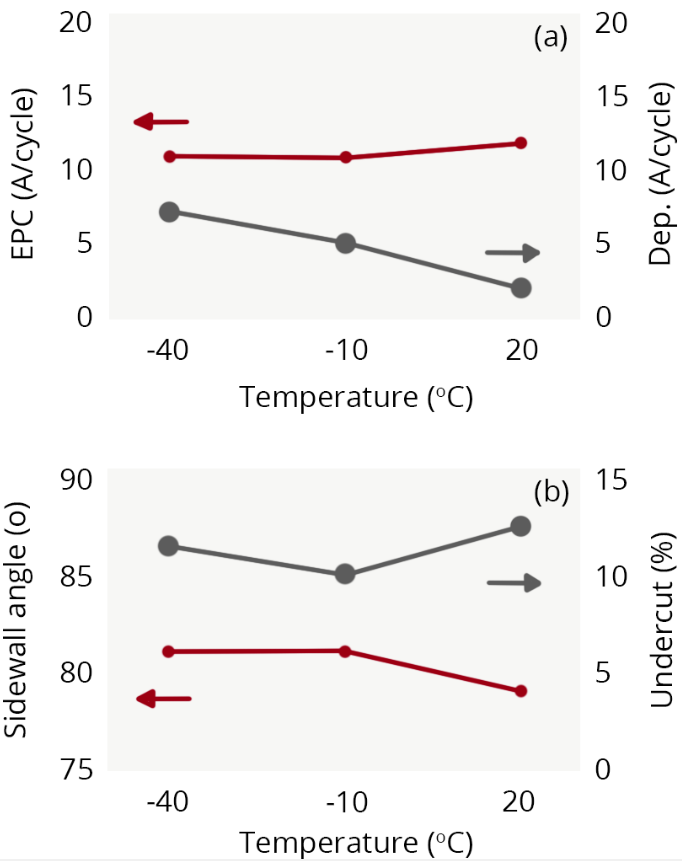 FBP was applied to generate a DC bias in the range of -9 to -19 V. The ion energy distribution was measured using the Semion System retarding field energy analyzer. The ion energy distribution was measured as a function of the pressure, using a pure Ar plasma with 300 W inductively coupled source power and 2 W forward bias power.

The impact of the plasma process parameters on the etch profiles were evaluated by comparing sidewall angle (θ), undercut and etching rate per cycle (EPC) as depicted in figure 2. The sidewall angle is the deviation from a perpendicular sidewall. The undercut percentage measures the amount of SiO2 removed from the region under the Cr mask. The etching depth of each cycle (EPC, Å/cycle) is defined as the thickness of SiO2 divided by the total number of cycles i.e. 60 cycles. These parameters were measured for different line widths (30, 40, 50, 100, 150 and 200 nm). 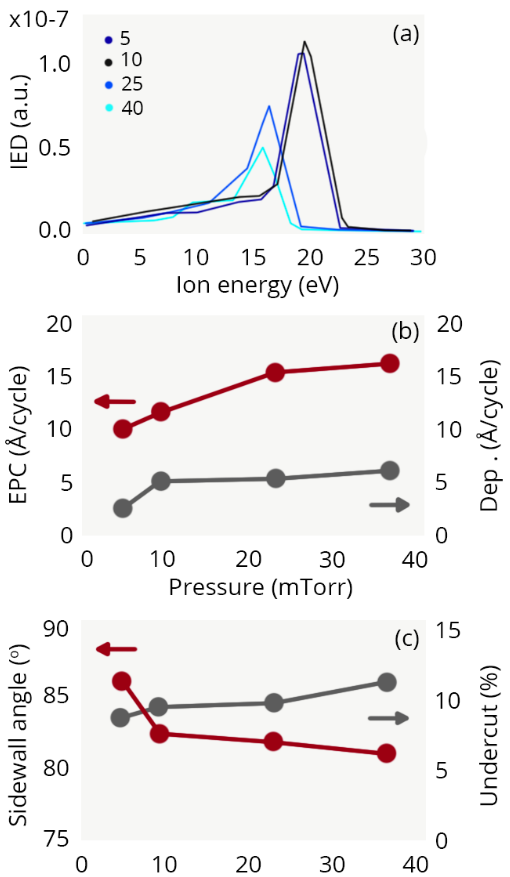 A. Effect of the substrate temperature on ALE Mechanism:

The authors investigated the effect of temperature on SiO2 etch profiles in earlier work. When the temperature was higher than T=-10 °C the etching rate increased, due to residual fluorine radicals coming from the chamber walls. For temperatures in the range T=-10 °C to +20 °C, chemical etching of SiO2 by fluorine was undesirably enhanced due to a reaction between the fluorocarbon polymer and the SiO2 surface. This etch rate enhancement came at the expense of film quality and etch selectivity. Here, the authors performed ALE at three different temperatures: T=-40, -10 and +20 °C. The pressure and forward bias power were 10 mTorr and 2 W respectively. The corresponding DC bias was -9 V. The sidewall angle and the undercut parameters are shown in figure 3.

The EPC remained constant over the temperature range while the deposition per cycle dropped from 7 Å/cycle at T=-40 °C to 3 Å/cycle at T= +20 °C. The higher deposition rate at -40 °C causes undesirable rounding of the bottom of the feature compared to +20 °C. However, the flat surface obtained at T= +20 °C was accompanied by a higher undercut value and more inclined sidewall. The authors identified that the -10 °C value provided the optimum results for deposition rate and an optimal directional transfer.

B. Effect of the pressure and ion energy distribution:

One of the important parameters in ALE is the operating pressure, which directly affects the flux and energy of the Ar ions as well as the concentration of Ar, C and F radicals in the plasma. A fixed substrate temperature of T=-10 °C and forward bias power of 2 W was maintained while the pressure was set to 5, 10, 25 and 40 mTorr for the different ALE process experiments.

For every pressure level, the authors carefully characterized the ion energy distribution (IED) using the Semion system. A single peaked energy distribution was exhibited at all pressures investigated. At 5 mTorr and 10 mTorr the peak energy and ion flux (area under the curve) are constant. As the pressure increases the mean free path of the ions became shorter than the plasma sheath width resulting in lower peak energy as shown in figure 4(a). The higher energy at lower pressure leads to more anisotropic etching but reduced etch rate as shown in figures 4(b) and 4(c).

The EPC increases at higher pressure as more radicals become available from the plasma, leading to an etch rate increase of more than 60% at 40 mTorr compared to 5 mTorr. However, the authors noted that the sidewall angle was improved at lower pressure, confirming that anisotropic etching was enabled at lower pressure.

C. Effect of the bias power on the etching directionality: 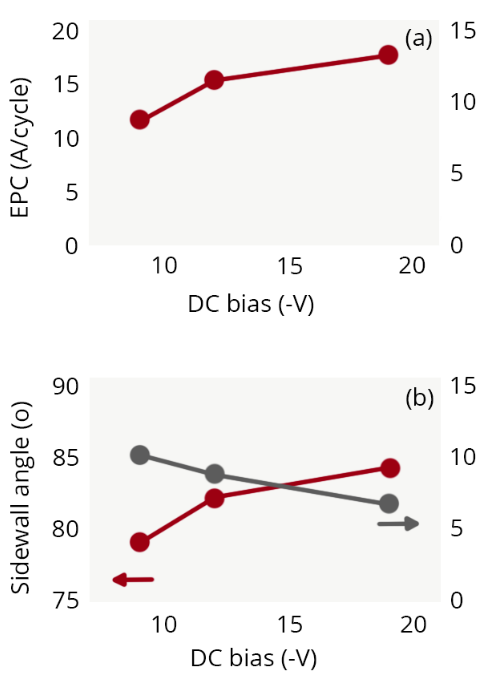 Figure 5 shows the etching rate as a function of the in-creasing negative bias that corresponds to an increase in forward bias power from 2 W (DC bias = -9 V) to 3 W (DC bias = -12 V) and 4 W (DC bias = -19 V). The ions with higher energy interacted with the mixed layer during etching that lead to a deeper SiO2 etching and higher EPC. Incomplete removal of the mixed layer at the bottom was seen at lower forward bias power. The lower Ar ion energies had the undesired effect of needing a longer time to completely remove the fluorocarbon layer. Increasing the forward power drives more ions to be incident on the electrode with a smaller deflection angle due to the smaller contribution of ion-neutral scattering at higher energies. This effect is shown in figure 5. The profiles became more vertical with the angle increasing from 78o at -9 V DC bias to 85o at -19 V DC bias and the undercut dropping from 10% down to 6% for the same DC bias values respectively. The authors identified that -19 V DC bias (4 W) as the optimum value to use in future patterning design of SiO2.

A series of Cr masked SiO2 samples with different trench sizes were etched for 60 ALE cycles under the optimal ALE self-limiting conditions identified i.e. -10 °C, 5 mTorr, -19 V DC bias and tetch = 60 s. Every feature exhibited the same vertical profile with an average value of 87o ± 1.5o and low undercut value of 3.7 ± 0.5% which demonstrated that the process allowed for achieving aspect ratio independent etching in a conventional ICP tool. The authors mention that features with larger aspect ratios etch faster than lower aspect ratios, regardless of the feature width. The contribution of ions scattered from the feature edges can be ruled out because the sidewall profile doesn’t change significantly with the feature width. To achieve features without any undercut, it is important to find a careful balance between the Ar ion parameters and fluorocarbon chemical reactants.

The authors extensively studied and characterized a cyclic CHF3/Ar ALE process using a conventional ICP tool. The temperature range (T = -40 to +20 °C) does not have a significant effect on the ALE behavior but rather is dominated by concurrent chemical and kinetic processes between the accelerated AR ions and mixed layer. Pressure had a more significant impact on the process where low-pressure values (5 mTorr) resulted in high ion energy and low density of F and C radicals. The reduced EPC and steep sidewalls (up to 86°) were driven by the anisotropic etching from the Ar ions. Higher forward power leads to an increase in the ion energy and smaller deflection angle – translating to deeper etching and improved verticality of the etched features.