Biocompatible materials, suitable for in vitro and in vivo applications, are of great importance to the healthcare industry. Polymer coatings are used extensively to control and stimulate certain biological responses. The properties of the polymer can be a disadvantage and can be incompatible with certain applications. In that case, surface modification can provide a suitable solution for optimising compatibility for the biological environment. The nanometer scale of the surface of a material is important in determining the nature of the chemical interactions occurring at the biological level. The commercially available methods are usually ineligible for cell culture procedures. In that case, surface modification provides an advantage whereby even cell-culture interactions can be monitored and controlled.

There are many possible ways to carry out surface modification. Most of these techniques utilize wet chemistry and can be time consuming and expensive. The plasma processing approach is investigated as it is considered to be a better alternative with high quality surface modification. Plasma processing is used to modify the top surface of a material without disturbing the properties of the bulk material. The main advantage is that the pre-preparation steps can be skipped. Furthermore, it is also said to be preferred in terms of safety and environmental-friendliness. Although external parameters provide sufficient description of plasma processes in a single system, replication of similar results require trial and error. 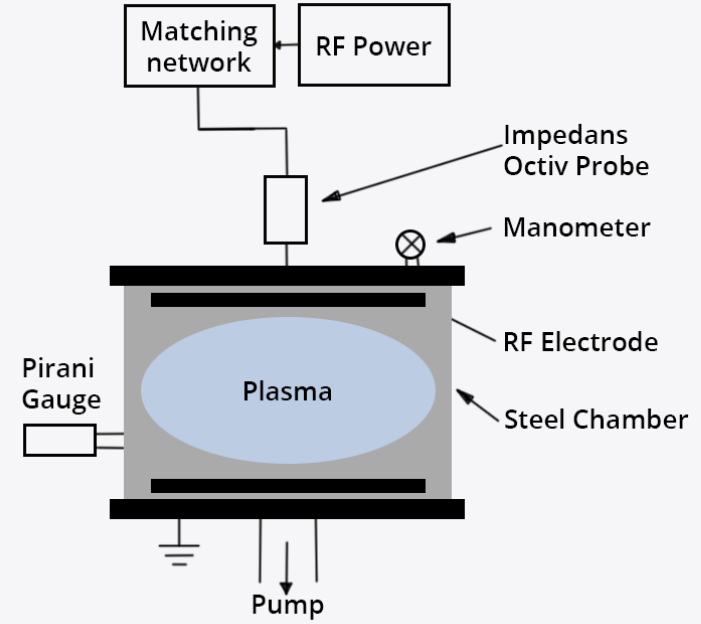 Furfuryl methacrylate (FMA) has been used as a pre-cursor to produce polymeric coatings for various applications. In a recent study involving 141 different monomers, FMA was an excellent candidate as a synthetic substrate for human pluripotent stem cell culture and expansion. In addition, it was one of the few potential monomers which had a vapor pressure suitable for plasma polymerisation. Studies also mentioned the ability of FMA to provide a furan ring that can be derivatized by Diels–Alder chemistry, making it an excellent candidate for applications in the microelectronics industry such as to immobilize organic molecules onto semiconductor surfaces and in the development of thermally responsive polymer-metal adhesion.

Looking at the fascinating surface properties of FMA-based coatings, this study aims to develop FMA plasma polymer coatings which may be used as substrates for cell attachment and expansion. In this work, the authors have investigated on the plasma phase of furfuryl methacrylate (FMA) and its relation-ship to the surface chemistry of the generated plasma coatings using mass spectrometry. The plasma produced was also characterized using XPS and ToF-SIMS. Plasma parameters including ion mass spectra, ion flux, and ion energy allowed the calculation of ion mass and ion energy fluxes to the surface. Combined with deposition rate measurements, this revealed the roles of neutrals and ions in the deposition process. The outcomes of this study will contribute to new discoveries of synthetic substrates for cell cultureware.

The authors carried out various methods starting with plasma polymerisation using a stainless steel vacuum chamber which was pumped down by a two-stage rotary pump to reach a base pressure of <0.2 Pa. Plasma was then ignited using an RF power generator with a matching network where the silicon wafer substrates were soaked in ethanol before it was dried under a stream of nitrogen. Plasma polymer coatings were deposited at RF power ranging from 2 to 20 W for 10 mins each. The mass spectrometer was mounted along the reactor mid-line and operated in residual gas analysis (RGA) and positive ion modes to acquire spectra of plasma-phase, neutral species and positive ions. Following this, Static Time-of-flight Secondary Ion Mass Spectrometry (ToF-SIMS) analyses were performed using a nanToF instrument with pulsed liquid metal 79Au+ primary ion gun operating at an energy of 30 kV. A mass resolution (m/Δm) of 6500-7000 was typically achieved at normal m/z 27 (C2H3+). The peaks were normalisation to the total counts of the corresponding spectrum.

The authors also used X-Ray Photoelectron Spectroscopy (XPS) to determine the chemical composition of he surface. It was operated at 10 kV and 20 mA and the elements in the plasma layer were identified the energy range 0-1100 eV at a pass energy of 100 eV and a step size of 0.5 eV. CasaXPS software was used to determine the line shape which was assumed to be Gaussian-Lorentzian components. A Quartz Crystal Microbalance (QCM) was used to measure the deposition rate during the plasma polymer film deposition. The silicon wafer substrates were placed as close as practicable to the QCM during plasma polymerisation experiments.

Finally, the authors measure the ion flux to the RF electrode using the Impedans Octiv VI probe placed in series between the matching net-work and the RF electrode. The ion flux for a collision-less sheath is given by the Bohm flux,

Given that the most intense peak in the mass spectrum represents the furanylmethyl fragment ion (m/z 81) (denoted FM in the spectra), this indicates that this fragment ion has a high level of stability. Proposed fragmentation patterns used for the assignment of m/z fragment peaks in the EI mass spectra. 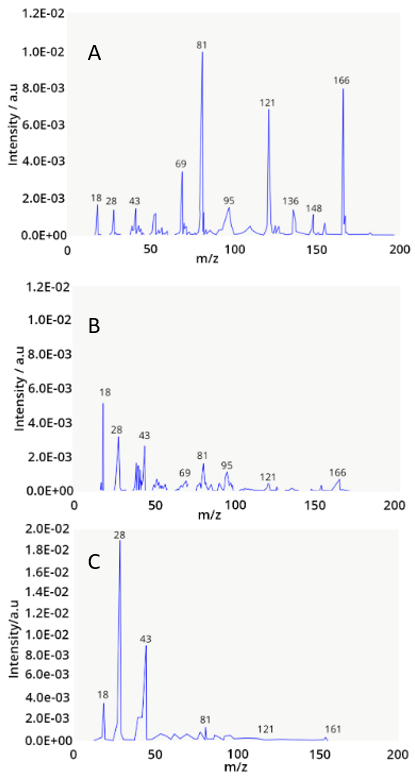 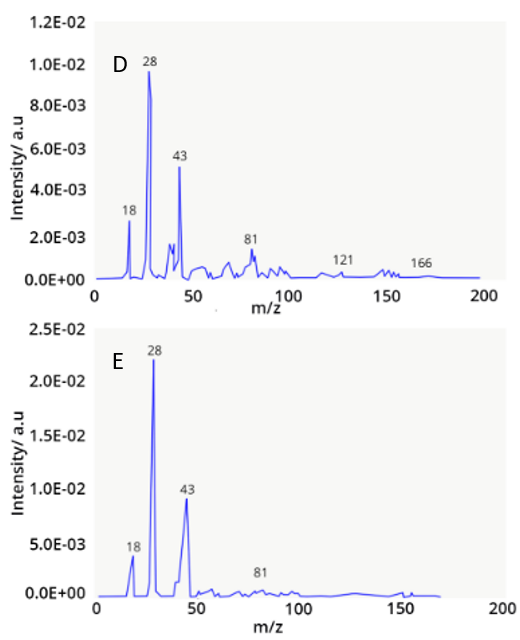 Figure 2: Mass spectra of the neutral species at 4.6 Pa.

The surface chemistry of the deposited plasma polymer coatings of FMA was also characterised by XPS and ToF-SIMS. XPS was used to determine the chemical composition of the surface. ToF-SIMS was utilised to analyse the molecular structure of furfuryl meth-acrylate plasma polymer (FMApp) coatings deposited onto Si wafer substrates at RF power 2–20 W. XPS analysis of FMApp coatings revealed oxygen depletion in the coatings from the expected theoretical value over the range of continuous wave RF power investigated in this study (Table 1). 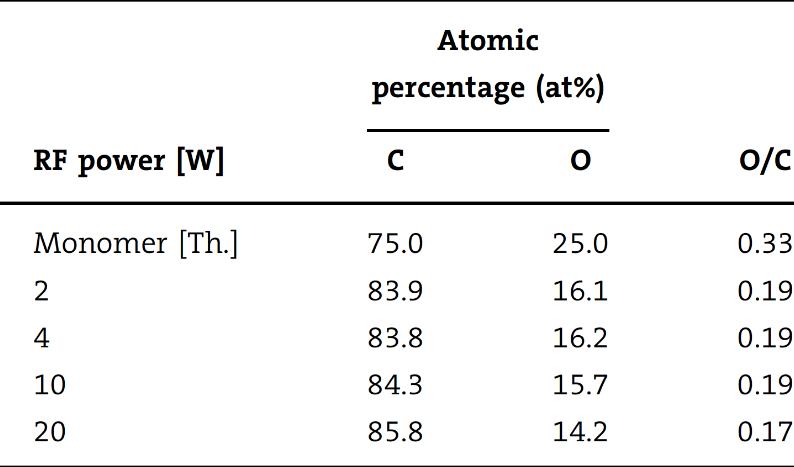 There was no significant change in the oxygen concentration (16.1–15.7 at%) measured in the surface as the RF power increased from 2 to 10 W; given that the O/C ratio remained unchanged (0.19). Nonetheless, increment of RF power to 20 W results in reduction in the oxygen concentration (15.7–14.2 at%) accompanied by an increase in hydrocarbon content. Similarly, the O/C ratio dropped from 0.19 to 0.17. This denotes that the loss of oxygen was due to an increase in the level of fragmentation of FMA molecules at the highest RF power. In addition, at higher RF power the ion assisted etching reactions may also contribute toward the loss of surface oxygen. Similar peaks appeared in the MS as Figure 2 at RF power of 10 W with no significant changes in their relative intensities, however, the intensity of C19H19O+ (m/z 327) fragment dropped to the baseline noise level. Interestingly, at RF of 20 W, fragment ions C5H5O+ (m/z 81) and C10H9O+ (m/z 161) were the only peaks with high relative intensities in the MS, where the remaining peaks declined sharply.

In the EI MS of the neutrals, no fragments with m/z values larger than the one associated with the FMA monomer (m/z 166) were detected. Each signal re-corded in the plasma was corrected for fragmentation due to electron impacts in the mass spectrometer by applying the following formula (2):

Overall, increasing RF power leads to a decrease in the peak intensity at m/z 69, 81, 121, and 166 and an in-crease in peak intensity at m/z 18, 28, and 43. This indicates that the concentration of high molecular weight neutrals, including the intact monomer, become low in the plasma phase due to fragmentation.

To obtain a better understanding of ion contribution to the FMApp coatings, the ion flux across the power range of interest was measured. Combined with the mass spectrometry and ion energy distribution, these measurements allow the ion mass flux, the average ion energy and the surface energy flux to be calculated. The ion mass flux data was then compared to deposition rate measured with QCM. Average ion energy was determined by taking the numerical mean (see table 2), and increased from 2.8 to 33.3 eV when the power was increased from 2 to 20 W. Table 2 shows the calculated ion mass flux to the surface versus deposition rate. Effect of power on ion flux, ion mass flux, deposition rate, ion energy, and neutralisation energy fluxes to surfaces.

The correspondence between the plasma-phase and the surface chemistry of the films emphasize the potential of using plasma mass spectrometry to predict the species forming on the surface. The results highlight that comprehensive detailed analysis of the properties of the plasma may be used to modify surfaces for specific applications in future, especially in regards to biomaterials.