Nanosatellites, also called CubeSats, are increasingly being utilized as teaching tools for technological demonstrations and for Earth observation and scientific applications. Because of their small size, limited available power and restricted mass budget, the current generation of CubeSats are not equipped with a means of propulsion. In cases where a conventional propulsion system is installed, it takes a significant share of the available spacecraft volume. Nevertheless, in order to further develop the use of CubeSats, propulsion is a major requirement.

Vacuum Arc Thrusters (VATs) are uniquely suited to such applications because of their simple, scalable, and robust construction. VATs do not require cathode neutralizers and use compact solid metal propellant. However, ablative pulsed thrusters, such as VATs are particularly prone to damage due to their high current operation and are typically limited by the number of pulses they can produce. A long duration type of VAT known as the inline screw-feeding vacuum-arc-thruster (ISF-VAT) addresses the destructive effect of the vacuum arc discharge on thruster components, namely, the electrodes and insulator.

Figure 1. Schematic diagram of the ISF-VAT.

The ISF-VAT concept, see figure 1, is built around a central cathode rod that sits within a concentric insulator tube. A second electrode, positioned at the outer edge of the insulator, functions both as the anode of the dc circuit and as the exit plane of the thruster. The cathode is connected to a metallic headless screw, which allows the cathode to be advanced at a precise rate inside the insulator, in a helical motion, which compensates from the both the radial and azimuthal cathode erosion patterns allowing for constant thruster geometry throughout the lifetime of the thruster.

The thruster plume was characterized using a commercial retarding field enery analyzer (RFEA) (Semion, Impedans) using a single sensor. The measurements are performed sweeping the RFEA around the thruster exit in an arc, at a distance of 150 mm in the plane of the thruster. The RFEA electronics signal sample duration is 1 μs.

The discharge current peak and duration is influenced by the quality of the cathode layer deposition on the insulator. In figure 2, three separate arc discharge currents are shown, representing the lowest, typical and the strongest individual pulse energies recorded during the entire (12 hr) run. 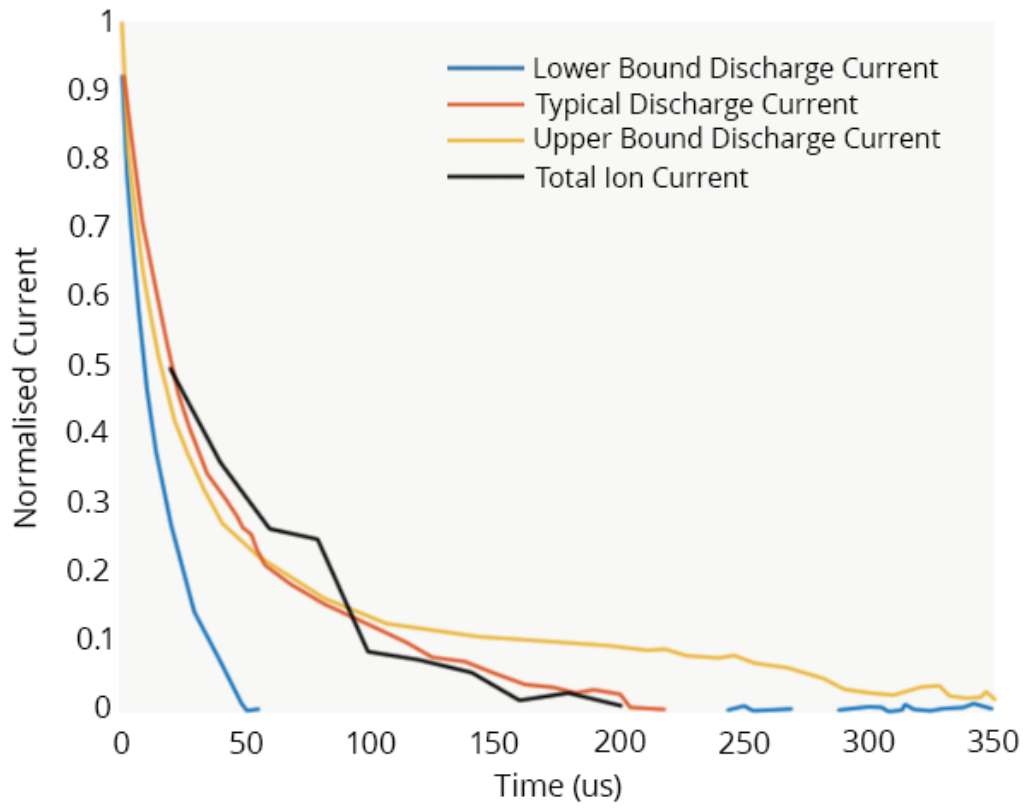 The discharge current typically lasts 200 μs. The total ion current follows a similar decay rate as the typical discharge current. This result permits the calculation of the ion fraction of the discharge current as fi = Iion (t)/Id (t). At tp = 20 μs, the absolute measured values are Id (tp-10 μs) = 11.5 A and Iion (tp ) = 0.57 A, respectively and then fi = 0.05, which is in the range given in the vacuum-arc literature of 0.05–0.1.

The ISF-VAT plume was characterized using the movable RFEA sensor. The data were collected over many thousands of firing pulses. The measurements were performed with the RFEA sensor located at the azimuthal angles of 0° to 75° in 15° increments and between 80° to 95° in 5° increments, where 0° corresponds to the thruster-axis direction. The RFEA measurements were synchronized with thruster ignition and recorded from 0 to 200 μs in the intervals of 20 μs. For each measurement condition (angular position relative to the thruster axis, RFEA grid voltage and delay time), an individual firing pulse was generated. 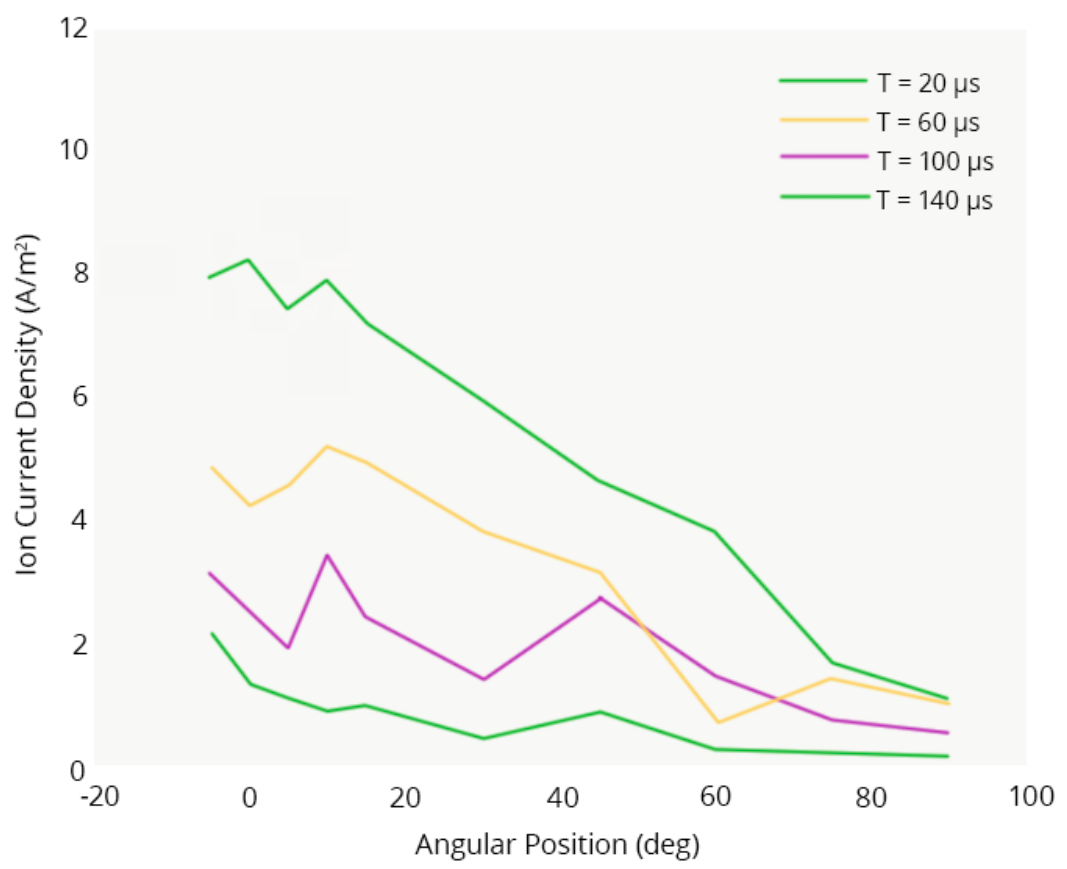 Figure 3. Ion-current density as a function of the azimuthal angle where 0° represents the direction the thruster is pointed. 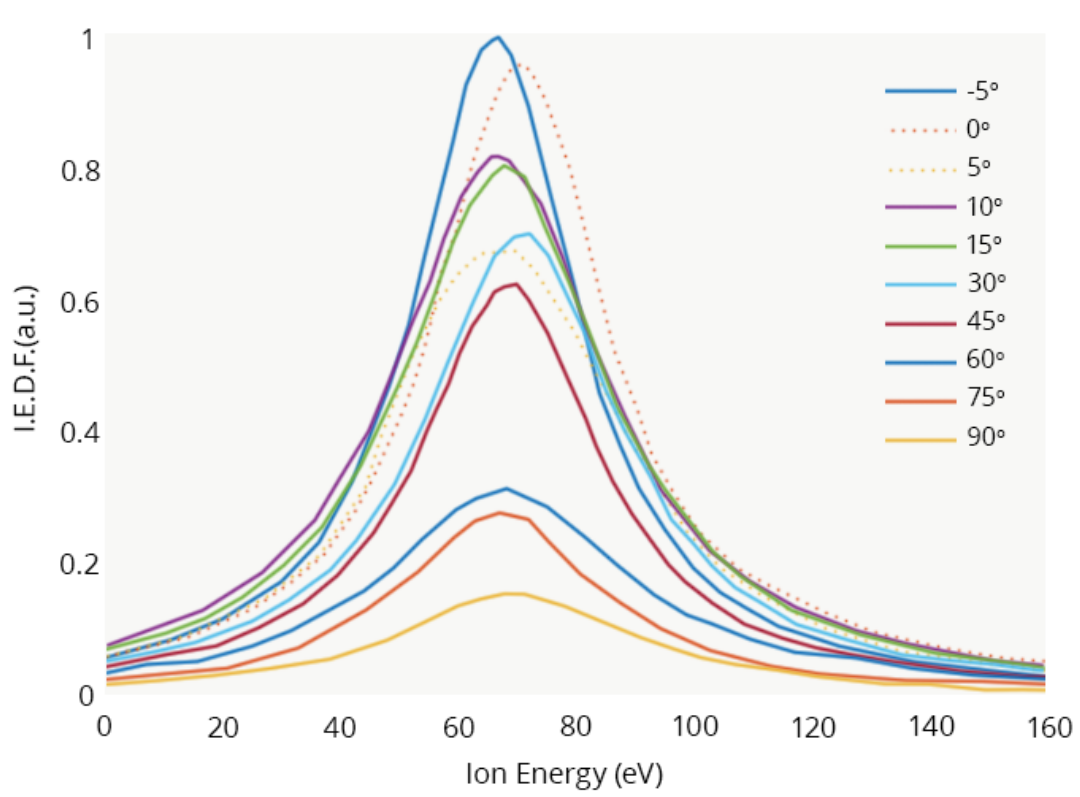 Figure 4. IEDF for different azimuthal positions ranging from -5° to 90°.

From these results, the peak ion population, in all directions, corresponds to a beam kinetic energy of (Eion) ≈ 65 eV. Using the ion energy the most probable ion velocity can be calculated as follows:

A ISF-VAT was operated continuously for 12 hrs permitting the characterization of the thruster over its lifetime. The ISF-VAT parameters were characterized using the RFEA measurements of the plume.