Plasmas which contain electronegative gases are used in many applications ranging from plasma processing to fusion research to the simulation of the D-region of the lower ionosphere. Electronegative gases (e.g. SF6, Cl2 and F2) are primarily used to produce negatively charged ions in a plasma discharge in a variety of processes. The creation of a uniform multi-component plasma with a high concentration of negative ions is possible due to the development of the cusp magnetic field arrangement used for surface plasma confinement.

Negative ions have been detected in the D-region of the lower ionosphere, motivating the production of a multicomponent plasma with negative ions near to the ionospheric conditions for ground-based studies in the laboratory setting.

The experiment is carried out using a modified double plasma device which is equipped with a magnetic filter placed between the two magnetic cages. The device consists of a stainless-steel cylinder 55 cm in diameter and 110 cm in length, shown in Figure 1. The plasma is produced in the source section (S) via a DC discharge between a hot tungsten filament as the cathode and the magnetic cage as the anode. The magnetic filter confines the high-energy electrons along the magnetic field lines. 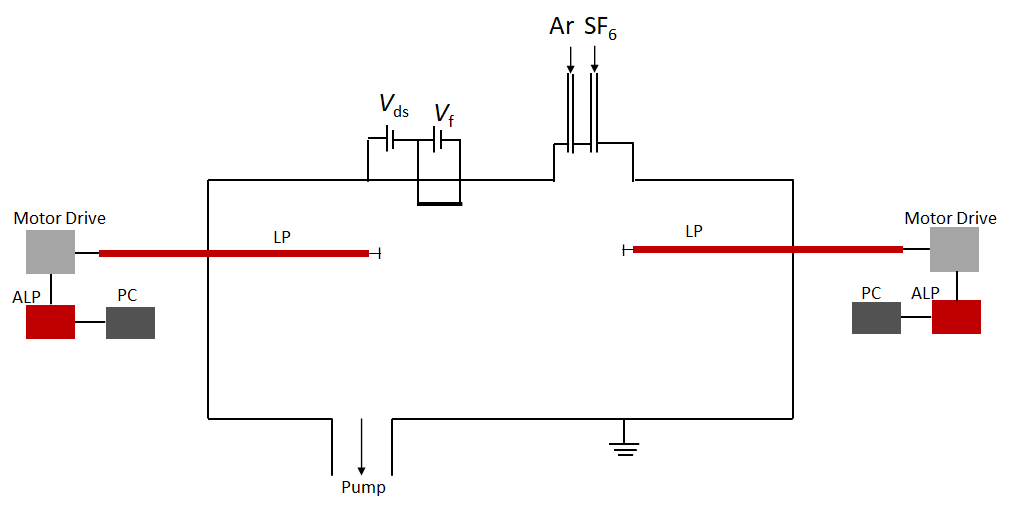 As the diffusion coefficient is inversely proportional to the square root of the electron temperature, the diffusion of low energy electrons is preferred. The diffusion region of the plasma is therefore composed of low energy electrons and negative ions. An automated Langmuir probe system (from Impedans Ltd.) is used to measure the plasma parameters in both the source and diffusion regions, with the electron temperature being an order of magnitude lower in the experimental diffusion region (0.25 eV) compared to the source region (2.5 eV). Negative ions are introduced through the injection of SF6  gas into an Ar plasma.

In the source section, the dissociative process dominates due to the higher electron temperature (1-2 eV) resulting in F– ions. The capture of low energy electrons (0.2 eV) by SF6  molecules in the diffused section leads to the formation of SF6–  and SF5–  ions. The negative ion concentration (r = η–/ η+) is calculated in both sections from the reduction in the measured electron saturation current in the Langmuir I-V characteristics while an emissive probe is used to measure the plasma potential via the inflection point method. 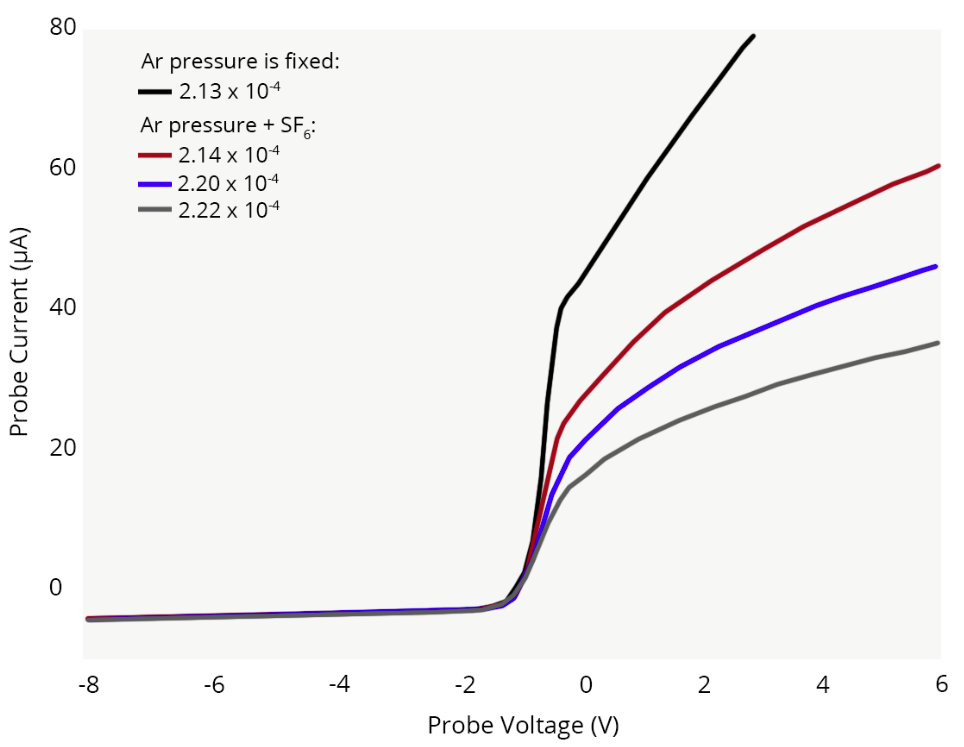 Langmuir probe I-V characteristics containing different partial pressures of SF6 ((1-9)*10-6 mbar) in the diffused section are presented in figure 2 where the source discharge current (Idis=100 mA) and Ar pressure (2.13*10-4 mbar) are kept constant. A clear decrease in the electron saturation current can be observed as the SF6 partial pressure is increased while the positive ion current remains unaffected. The measured electron density for the pure Ar plasma is ηe ~ 5*106 cm-3 while a marginal increase is noted in the electron temperature (0.2-0.4 eV) when the SF6 partial pressure is increased. 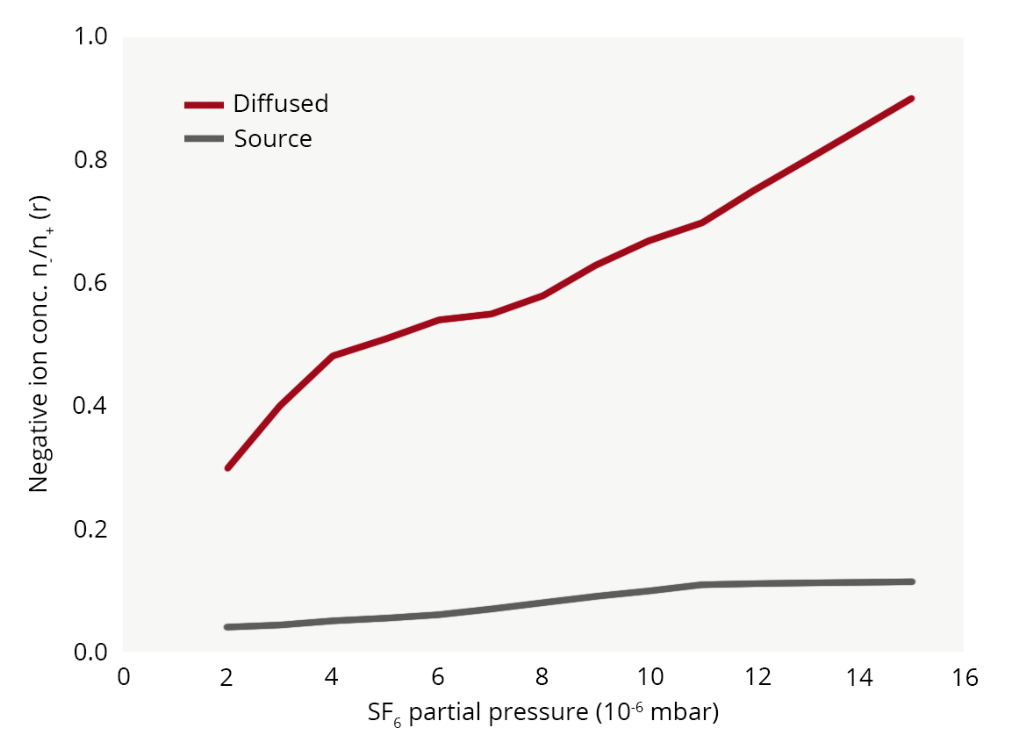 Figure 3. Comparison of the negative ion concentration (r) vs SF6 partial pressure in the Source (F– ) and diffused (SF6 ) sections. 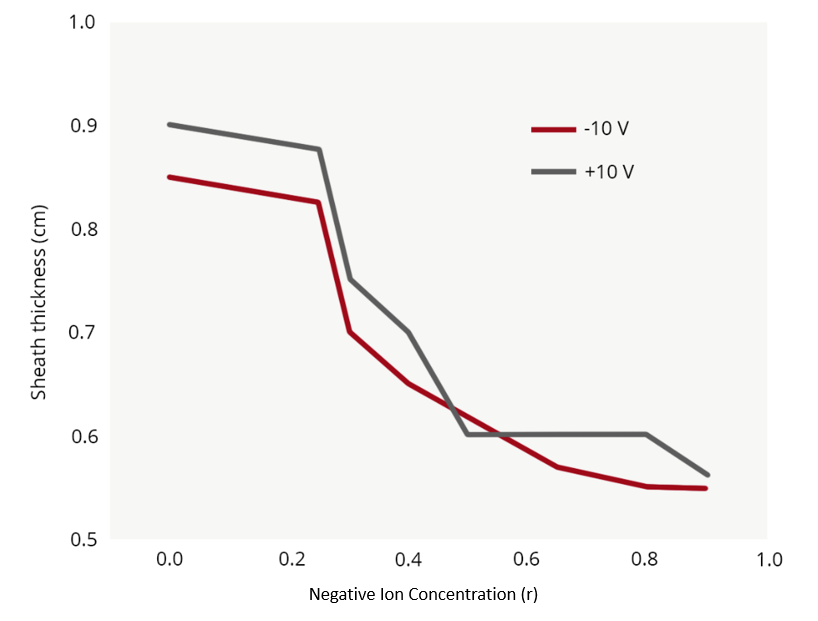 Figure 4. Sheath thickness vs negative ion concentration in the diffused section for Vplate=±10V.

In Figure 4, the measured sheath thickness (determined from the emissive probe) is shown as a function of the negative ion concentration for constant plate bias voltages Vplate=±10V.

A Langmuir probe can effectively be used to determine the negative ion concentration in an electronegative plasma through the measurement of the electron saturation current and the positive ion saturation current. It was also demonstrated that when the negative ion concentration increases the sheath suddenly becomes thin which may be attributed to the significant reduction in low energy electrons from the electron energy distribution, enhancing the Bohm velocity.