The continuous downscaling of microelectronic devices imposes increasing demands on plasma processes in terms of etch homogeneity, profile tolerance, surface damage, etch materials, throughput and reproducibility. Especially, the plasma-induced damage becomes difficult to control. The knowledge of the impact of the plasma pulsing parameters on the plasma chemistry and ion flux and energy is indispensable to fully identify the potential of pulsed plasmas and to transfer the already published results to other plasma chemistries and applications.

A baseline process with 200 sccm HBr, 750 W of source power, and a pressure of 20 mTorr is chosen. This corresponds to typical process conditions for silicon etching in the semiconductor industry. For the analysis of HBr/O2 plasma, 5 sccm of O2 is added. When silicon is etched, an additional 200 W of bias power is used. In pulsed conditions, both source and bias power supplies are pulsed simultaneously. The authors analyze the ion flux without bias power in CW plasma or in pulsed conditions with a pulsing frequency of 1 kHz and a duty cycle varying between 10% and 75%. Then, they analyze the impact of the bias power on the ion flux and energy in continuous wave plasmas. Ion flux and ion energy are also analyzed in pulsed plasma for a constant pulsing frequency of 1 kHz and various duty cycles of 20%, 50%, or 75% and changing frequencies. 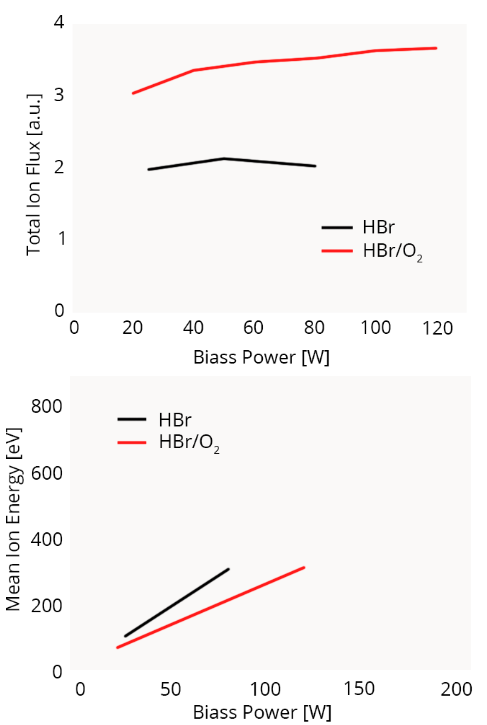 Figure 1. Total ion flux measured with the RFEA under continuous wave operation for HBr and HBr/O2.

For ion energy analysis in pulsed plasmas, the plasma conditions were modified to maximize the signal to noise ratio and limit the ion energy to less than 400 eV, i.e., the source power was in-creased to 1200 W, the pressure decreased to 10 mTorr, and the bias power was limited to 60 W.

The experiments were conducted in a 300 mm AdvantEdge DPS etch tool from Applied Materials. The Impedans Semion retarding field energy analyzer (RFEA) was used to measure the Ion flux and the IVDF. 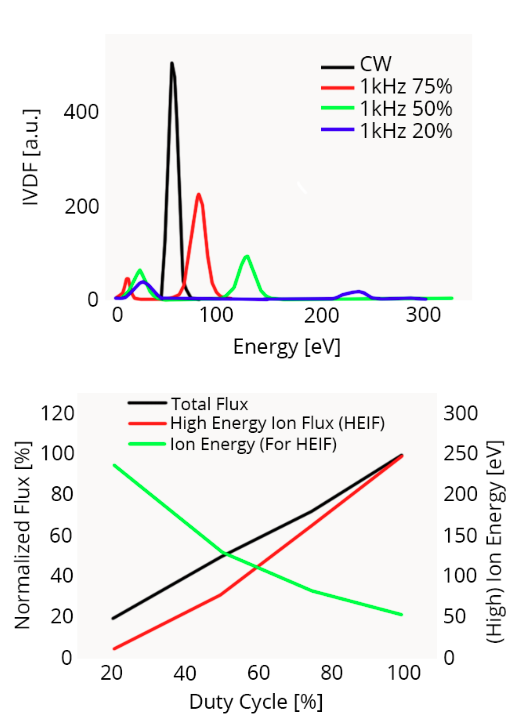 Figure 2 shows the time averaged IVDF for a pulsed HBr plasma with different duty cycles ranging from 25% to 100% (CW), along with the corresponding ion fluxes under plasma conditions of 10 mTorr, 1200 W source and 60 W bias powers. In CW mode, a single peak IVDF is measured. If the plasma is pulsed, a low energy (LE) peak from the afterglow appears in addition to the HE peak from the active source and bias power period. For decreasing duty cycles, the high energy peak shifts to very large values due to the decreasing ion flux. 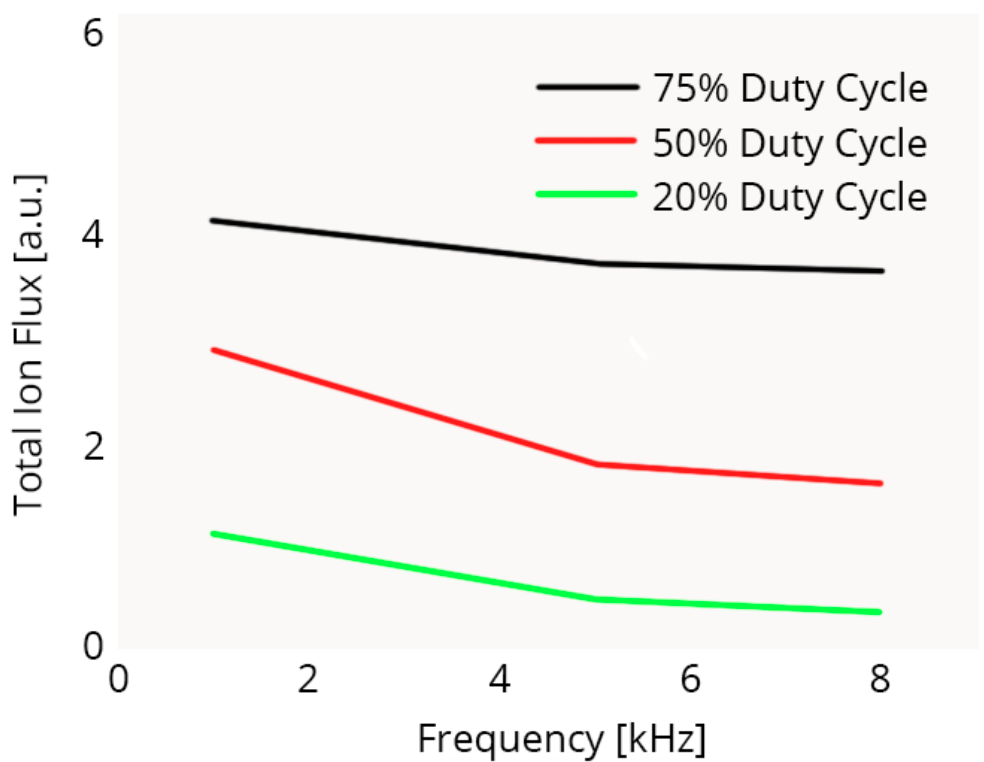 Therefore when the plasma is pulsed under typical etching conditions at this duty cycle (i.e. 750 W source and 200 W bias), the ion energy is estimated to be about 2.5 keV, leading to very specific etching conditions compared to what can be obtained in a CW plasma. Since the wafer is bombarded by a low flux of highly energetic ions, we are in a condition that resembles those obtained in purely capacitively coupled reactors, but at lower pressure with collisionless sheaths and with a high flux of low energy ions during the off-time of the plasma pulses.

Depending on the gas composition of the plasma, the ion flux varies significantly. This is due to the changed reaction coefficients on the chamber walls that affect the plasma composition and therefore the ion flux.

The total ion flux increases slightly with higher bias power due to an increase of the density of silicon etch product in the gas phase as well as to a non-negligible local ionization in front of the sheath that is facing the RF biased wafer. Directly on the wafer, the ion flux from an HBr/O2 plasma is higher than in the pure HBr chemistry.

The total ion flux increases slightly with higher bias power due to an increase of the density of silicon etch product in the gas phase as well as to a non-negligible local ionization in front of the sheath that is facing the RF biased wafer. Directly on the wafer, the ion flux from an HBr/O2 plasma is higher than in the pure HBr chemistry.

For pulsed mode, the IVDF shows a high and a low energy peak, which correspond to the ions from the on- and the off-time of the plasma, respectively. If the duty cycle is reduced, the total ion flux, measured by the RFA on the wafer, decreases linearly and the high energy peak shifts to even higher energies. The relative contribution from the high energy peak to the total ion flux is also reduced with the duty cycle, leading to an overall decreased average ion energy.

Similar to a decrease in duty cycle, an increase in frequency, especially for low duty cycles, results in a further reduction of the total ion flux.