The Spacecraft require propulsion to perform maneuvers in space, such as orbit transfers, avoidance of collisions, orbit maintenance to compensate for aerodynamic or gravitational perturbations etc. The choice of propulsion technology, in particular its exhaust speed, determines the propellant mass needed. At present, xenon is used almost exclusively as an ionizable propellant for space propulsion. However, xenon is rare, it must be stored under high pressure and commercial production is expensive. Thus, for the long-term sustainability of the space industry, it is critical that a replacement propellant be found. In this paper, Thrustme described an iodine electric propulsion system for the very first time and presented in-orbit results demonstrating this new technology, using Impedans Semion RFEA as one of the diagnostic for ground testing.

The schematic diagram of the experimental setup is shown in figure 1. An iodine electric propulsion system (the NPT30-I2, with a nominal power and thrust of 55 W and 0.8 mN, respectively) is shown. An iodine plasma is created by electron impact ionization using a radio-frequency (RF) inductive antenna, and positive plasma ions are extracted and accelerated by the grids to high speeds (about 40 km/s) to produce thrust. A Semion 2500 Retarding Field Energy Analyzer (RFEA) from Impedans is used is used to measure the distribution function of beam ions. 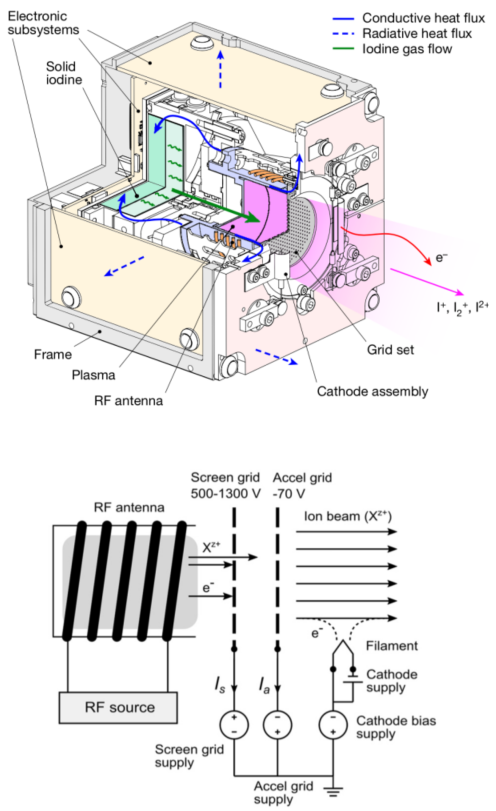 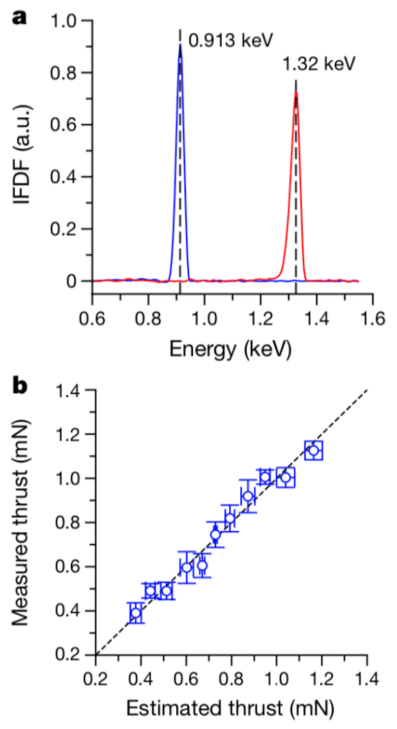 In present study, authors demonstrated a propulsion system that uses iodine propellant and presented in orbit results of this new technology. Diatomic iodine is stored as a solid and sublimated at low temperatures. A plasma is then produced with a radio-frequency inductive antenna, and shows that the ionization efficiency is enhanced compared with xenon.

In this work, both atomic and molecular iodine ions are accelerated by high-voltage grids to generate thrust, and a highly collimated ion beam is produced with substantial iodine dissociation. The ions in the plasma source are extracted and accelerated by voltages between 800 V and 1300 V applied across the grids. Measurements of the ion flux distributions in figure 2 (a) confirm the presence of high-energy ions with an average energy close to the net accelerating voltage, Vn of 900 V and 1300 V respectively.

By measuring the ion-beam current an indirect measurement of the thrust is obtained from,

Here Ibeam is the beam current, MI and qI are the mass and charge of atomic iodine ions, respectively, and γ and α are correction factors: γ = cosθdiv, where θdiv is the beam divergence half-angle, and α=β1++√2βI2++ βI2+ /√2, where βI+, βI2+ and βI2+ are the relative current contributions for each ion species and the pre-factors represent the square root of the relative mass-to-charge ratio. The propulsion system electronics continually perform these indirect thrust estimates during operation. Direct thrust measurements are also obtained using a thrust balance. Figure 2(b) shows the measured thrust range achievable, and a comparison between direct and indirect measurements. The significant results published in this work shows that iodine is not only a viable replacement propellant for xenon but also gives enhanced performance.

This work presents an iodine electric propulsion system and in-orbit results are discussed demonstrating this new technology. The propulsion system has been successfully operated in space onboard a small satellite with maneuvers that is confirmed using satellite tracking data. It is anticipated that these results will accelerate the adoption of alternative propellants within the space industry and demonstrate the potential of iodine for a wide range of space missions.