Two types of spacecraft thruster are commonly used: a) electrostatic ion thrusters and b) Hall thrusters. These two methods have proven to be more advantageous compared to traditional chemical or MHD thrusters that were used in the early days of space exploration.

In the electrostatic method, the ion thrusters generate plasma whereby voltage is applied between a thermionic cathode and an anode grid. The ions passing through that grid are accelerated to high velocity by a second grid and form an ion beam that pushes the spacecraft forward by the principle of momentum conservation. The chemical element, Xenon is normally employed, as it is inert (unreactive) and has a large mass. This method requires a source of cool electrons that functions to neutralize the space charge of the ion beam.

Hall thrusters are able to generate a denser plasma by holding the electrons back with a magnetic field (B-field) while the ions are accelerated by an electro-static voltage. This method also requires an electron source for neutralizing the space charge. The formula to obtain the specific impulse (Isp) is shown in equation 1. This is one of the ways to measure the capability, performance and the effectiveness of the thruster. The speed reached by the spacecraft depends on the supply of Xenon available for ejection.

Helicon sources produce higher plasma density than most other discharges at the same power and therefore this approach is considered for use in thrusters. Since the plasma is not completely ionized, neutral atoms entrained by the ions will also be released, thus increasing the effective Isp.

where, νex is the ion exhaust velocity and g is the acceleration due to gravity.

Normally, helicons require a DC magnetic field, and almost all the existing experiments done so far have produced the B-field with the use of heavy copper coils, driven by a DC power supply. In this study, the authors have proposed a thruster with greatly reduced size and weight of the thruster by designing a small but dense helicon source using permanent magnets. In the paper, the helicon thruster design is explained and characterized using a Semion ion energy analyser.

Normally, helicon designs are complicated as they require magnetic fields and special antenna designs. Fortunately, in this study, the experimental design has been simplified by program HELIC as shown in figure 1. 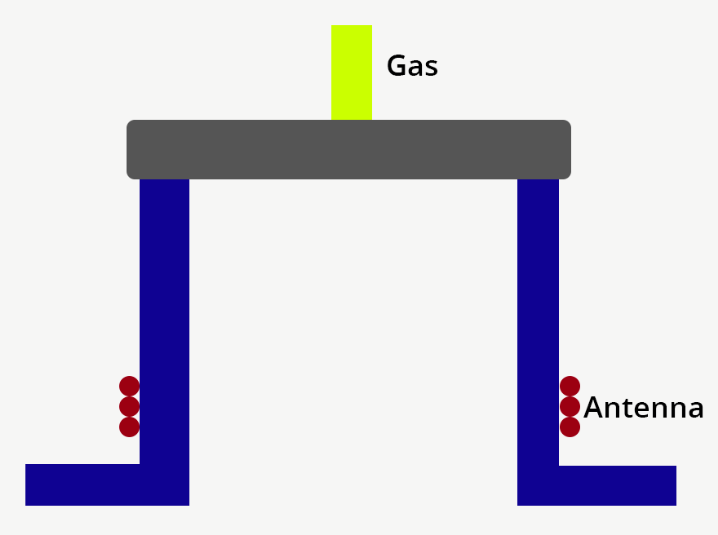 Annular magnets with vertical polarization create a strong field inside the tube, but plasma produced will leak sideways along field lines instead of downward as shown in figure 2. Hence, the discharge is placed below the stagnation point, where the B-field is weaker but is quite uniform and extends to infinity. The magnet shown in figure 2 is a neodymium (NdFeB) magnet of 3 in. (7.6 cm) inner and 5 in. (12.7 cm) outer diameters and is 1 in. (2.54 cm) thick. 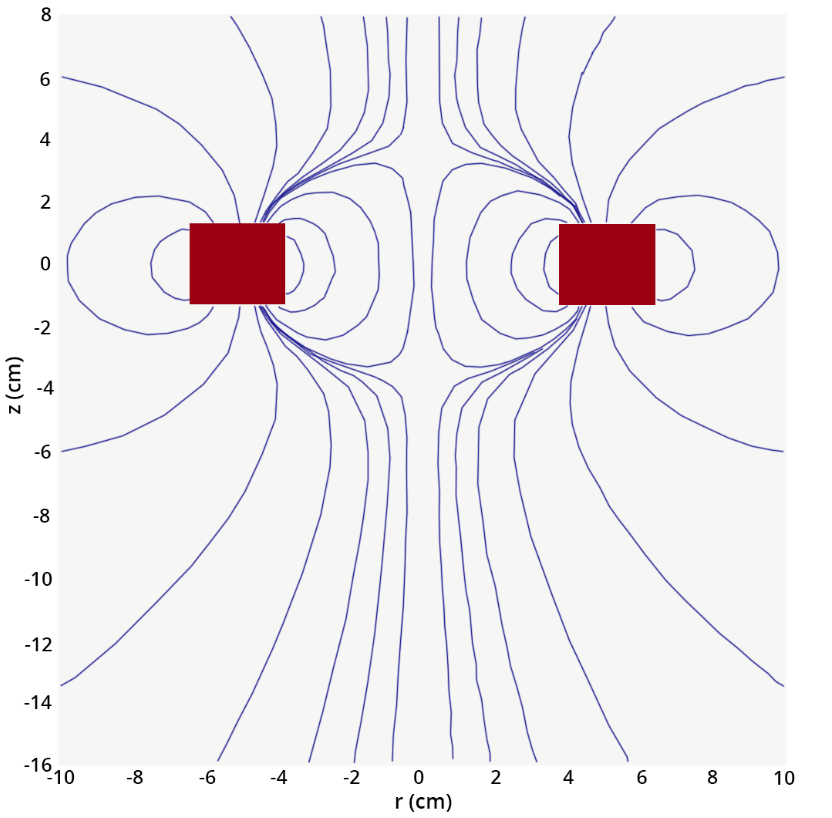 Figure 2. Shows the field lines of an annular permanent magnet and the possible positions of the discharge tube indicated by the rectangle.

The helicon source is attached on the large chamber shown in figure 3. The retarding-field energy analyzer (RFEA) is supported on a vertical shaft that can position it at changing distances below the source. Three ports on the side permit the insertion of Langmuir probes for radial measurements at three z positions. 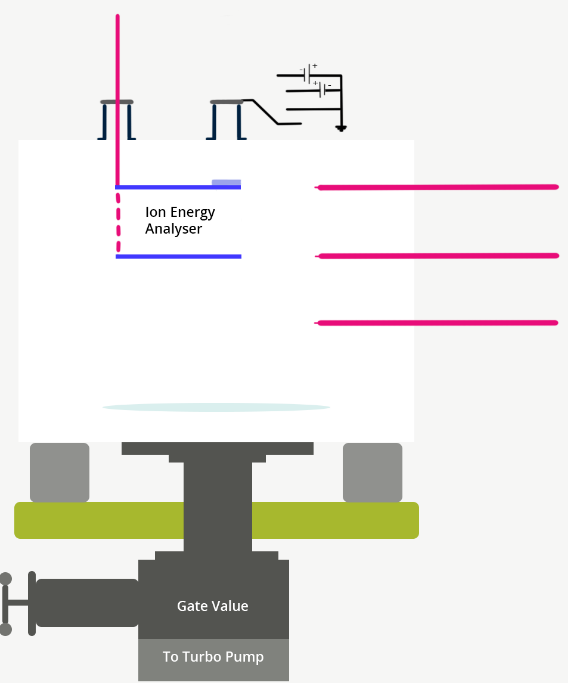 The RFEA system is designed to be employed in a strong RF environment. The aluminum case is approximately 70 mm in diameter and 5 mm thick, covered with aluminum oxide. It has a small ground capacitance, so that the entire grid assembly, shown in figure 5, follows the RF at the local floating potential.

The grid G1 repels electrons while grid G2 provides the swept retarding voltage to retard the ions, and C is the ion collector. The insulated cable conducts and transfers the voltages to a filter box, which discards most of the RF and passes DC voltages through a vacuum seal to the control unit. The DC voltage of G0 was carefully quantified with an oscilloscope probe to obtain the floating potential to relate the ion energy distribution functions (IEDFs) to machine ground. 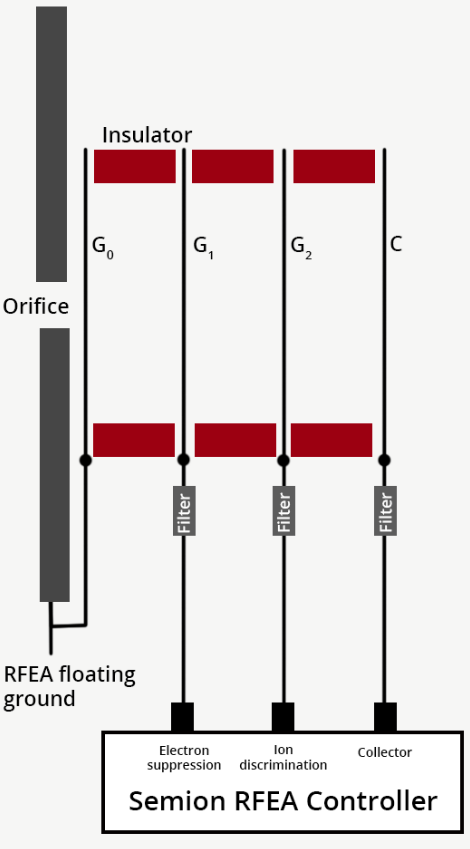 The measured IEDFs are summarized in figure 5. The voltage represents the ion energy in eV. 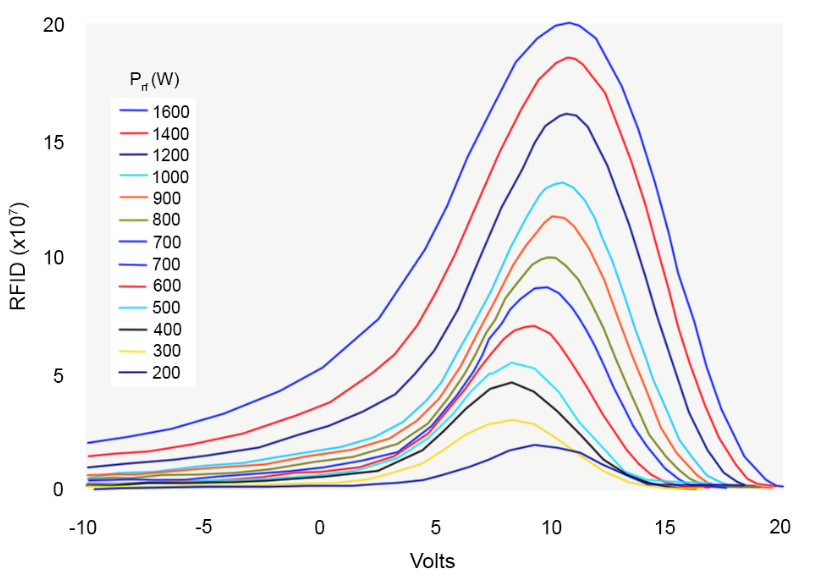 The change of IEDF as a function of distance from the source is shown in figure 5, for rf power of 400 W. The ions slow down due to neutral collisions and lose density due to diffusion, as expected. Figure 6 shows the resulting Isp values with and without bias applied to the end plate of the helicon source. The value of 1200 seconds is comparable to what is currently available with Hall thrusters. However, this can be achieved at much lower voltages with a helicon thruster, which is a major advantage. 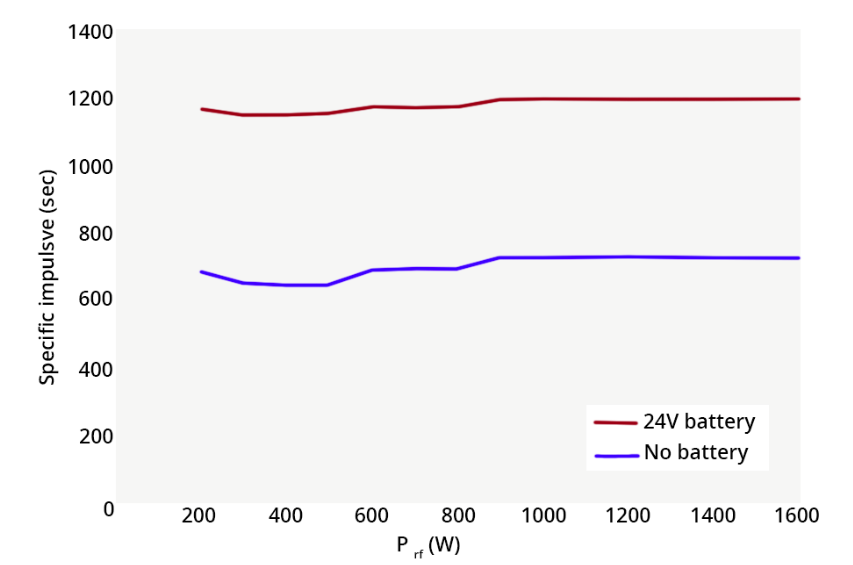 Figure 6. Specific impulse from a PM helicon thruster at 15 mTorr: intrinsic and with +24 V bias.

Helicon thrusters have received attention from the spacecraft community thanks to their large intrinsic thrust and the circumvention of electron neutralizers. Since the B-field required is only 30-60 G, stable and weaker magnets can be employed. Use of sophisticated magnets is not necessary. The size and weight of the helicon device has been greatly minimized by employing simple annular permanent magnets. The helicon can be steered by a small 200–400 W RF power supply and its matching network. The ions streaming from the source have an inherent specific impulse of about 700 s. This can be elevated indefinitely by biasing the end plate of the helicon discharge positively, drawing only milliamperes of current. With a bias of only 50 V it is possible to bring Isp up to that of Hall-effect thrusters.