Plasma polymerization offers a favorable method for coating surfaces with thin films of specific chemical functionality such as aldehydes, carboxylic acids, alcohols, etc. These coatings enable materials to be used for a variety of applications ranging from biomaterials, polymer grafting, and nanoparticle attachment. Inorganic phosphate coatings have been used previously for corrosion prevention, mineral dispersion and rheological modification.

The existing techniques for deposition of phosphates are (1) sol-gel preparation, (2) direct deposition from solution and (3) graft copolymerization. These current methods have drawbacks in terms of the deposition of the solvents, with consequences regarding the chemistry of the substrate, whereby polyphosphates adsorb to certain groups of chemicals such as transition metals and hydroxides but not silica. Hence, the plasma polymerization approach is considered advantageous and offers the opportunity to overcome these issues since the process is dry, and the energy to chemically bind the precursor to the substrate may be provided by kinetic energy rather than chemical energy inherent to the precursor-substrate interaction.

The incorporation of organic groups to the precursor (phosphate) is performed to facilitate adhesion to some substrate molecules. For plasma polymerization, the precursor is required to be a volatile chemical. In addition, organophosphates are chosen as they exist as liquids at room temperature and their volatility is applicable for plasma sensing. Inorganic phosphates are not considered as they exist as solids at room temperature.

In the present study, the authors investigated the deposition of organophosphate thin films from low pressure plasma. Using triethyl phosphate (TEP) as the precursor, the effect of power on the chemistry of the plasma phase and the deposited thin film is studied at constant pressure in the absence of atmospheric nitrogen, to prevent undesired incorporation of nitrogen onto the resulting thin films. The plasma phase chemistry and surface chemistry of the films produced are then compared. 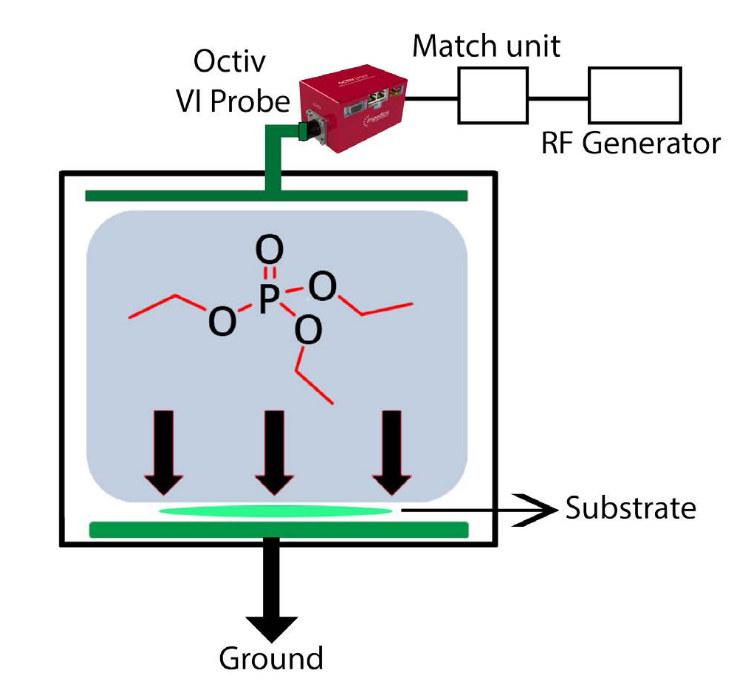 The samples were located on the grounded stage. RF power was applied to the chamber via a 0.28 m internal RF electrode which was powered at 13.56 MHz. Impedans’ Octiv VI Probe was used to measure the ion flux to the powered electrode, placed in series between the matching network and the RF electrode. A schematic of the plasma reactor shown in figure 1.

A. Ion Flux and Deposition Rate

Figure 2 shows the ion flux for 1 Pa TEP plasma as a function of RF Power. The ion flux is shown to increase constantly from 5W to 40W. The result is consistent with the ion flux measured for this plasma system using other precursors. The deposition rate for selected plasma conditions is also shown. The deposition rate increases rapidly with RF Power initially and then plateaus at power above 10 W, with a small decrease observed above 25 W.

The ion energy distributions (IEDs) are shown in Figure 3. At 2 W RF power, the maximum ion energy is 18 eV, with a maximum intensity at 15 eV. Increasing the RF power to 10 W and 25 W increased the sheath voltage to 22 eV and 26 eV respectively.

At low power the ions collide with the surface with sufficient energy to deposit, but not enough to cause extensive etching and atomic rearrangements. Increasing the power leads to an increase in the proportion of ions with energies greater than 15 eV; at 25W the majority of ions have energies greater than 15 eV. Thus, the contribution of ions to the deposition, their effect on etching, cross-linking and atomic scrambling is expected to increase with applied RF power. 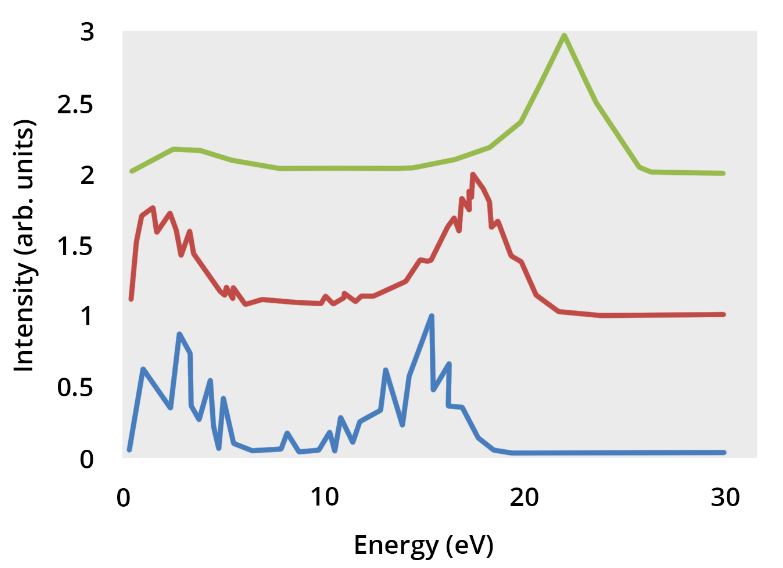 The appearances of the various peaks in figures 5 and 6 indicates the increased fragmentation of the pre-cursor as the RF power is increased and correlates to the reaction mechanism shown in figure 4. Surface analysis by XPS revealed that all of the TEP plasma polymers consisted of carbon, oxygen and phosphorus. Contrary to previous studies, no nitrogen presence was observed. The plasma polymer surfaces were a mixture of hydrocarbon species, retained P=O groups, with only minor loss of P-O groups.

Figure 4. Reaction pathways for some of the important species observed in the plasma mass spectra.

The AFM images show that while the initial roughness of each bare substrate was different, the addition of plasma polymer decreased the roughness slightly. Thus, the TEP plasma polymer coatings were largely conformal, but also smoothed out the rougher parts of the substrate. The stability of the plasma polymers in water on different substrates showed that applied RF power only had a minor effect on film solubility. The nature of the substrate-plasma species interaction is critical in being able to form insoluble structures.

Plasma polymers of TEP have been produced under low pressure conditions. The Octiv VI probe was used to measure the ion flux during the deposition of organophosphate thin films. Analysis has shown that increasing the applied RF power input increases the contribution of ions to the deposition. The plasma phase ion mass spectra demonstrate that the phosphate ion is extremely stable in the plasma. This is confirmed by surface analysis of the plasma polymers, which show good retention of the phosphate structure, linked together by hydrocarbon species. Finally, the interaction with the substrate is critical in forming insoluble plasma polymers. Organic substrates allow adhesion via the aliphatic carbon species and results in cross-linked structures which are highly insoluble in water.