In order to achieve large-scale uniform plasma processes with high ion density, novel, self-matched large plasma sources using microwave solid state generators have been developed by using a distribution of elementary sources. However, since the integration of such system is not easy in an industrial process, their use is more suitable for laboratory applications. To overcome this problem, authors of this work have developed a new ECR coaxial microwave plasma source, the ‘Aura-Wave’. The aim of this study is to achieve large plasma surfaces with high uniformity and high density by using different networks of several Aura-Wave sources. Plasma density was measured by Impedans (LP) Langmuir probe. A prediction of the experimental results was realized using a simulation software and compared to the LP measurements.

The schematic cut view of the Aura-wave source showing the magnetic field line is shown in figure 1 (a). The reactor showed in figure 1 (b) permits the integration of 25 SAIREM Aura-Wave plasma sources giving the flexibility to test a lot of different configurations. The source works with a 2.45 GHz microwave solid state generator with every source connected to its own microwave module solid state generator (SAIREM MMS450) which can deliver a maximum power of 450 W. The plasma density was measured by a Langmuir Probe System from Impedans Ltd. 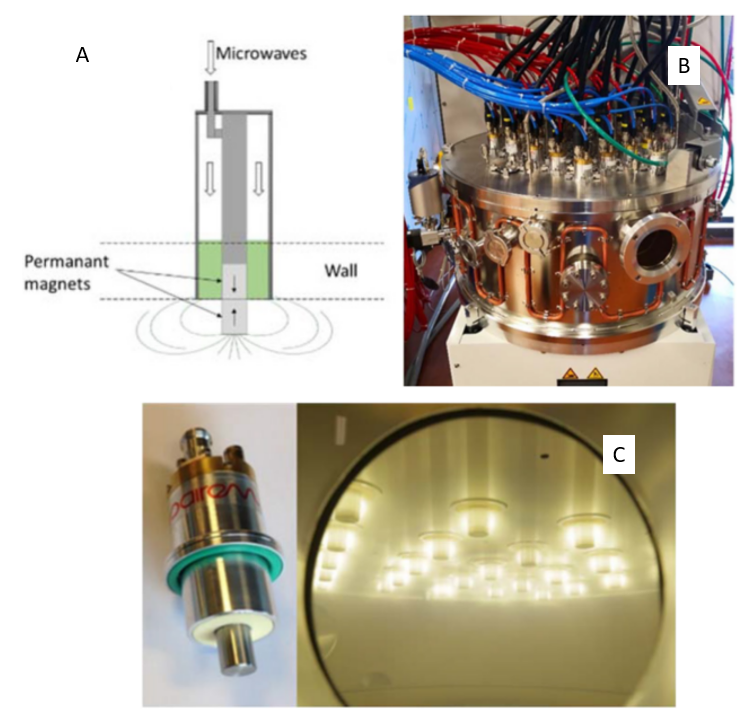 The strategy followed in this work starts by the acquisition of the plasma density Ne profile of one source for a plasma of pure oxygen, nitrogen and argon as a function of the transmitted microwave power at different pressures (between 0.1 and 4 Pa) and different distances from the source plane. 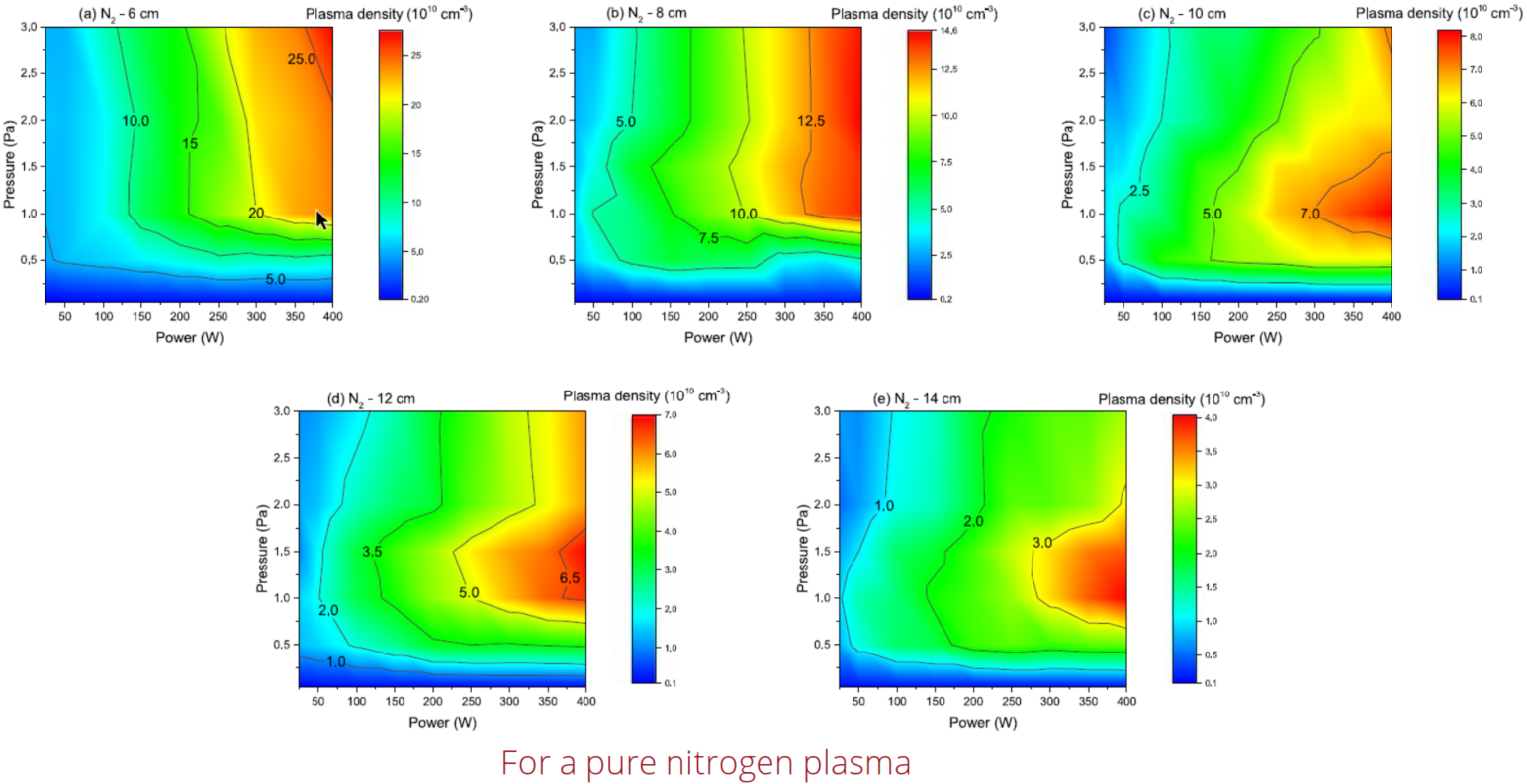 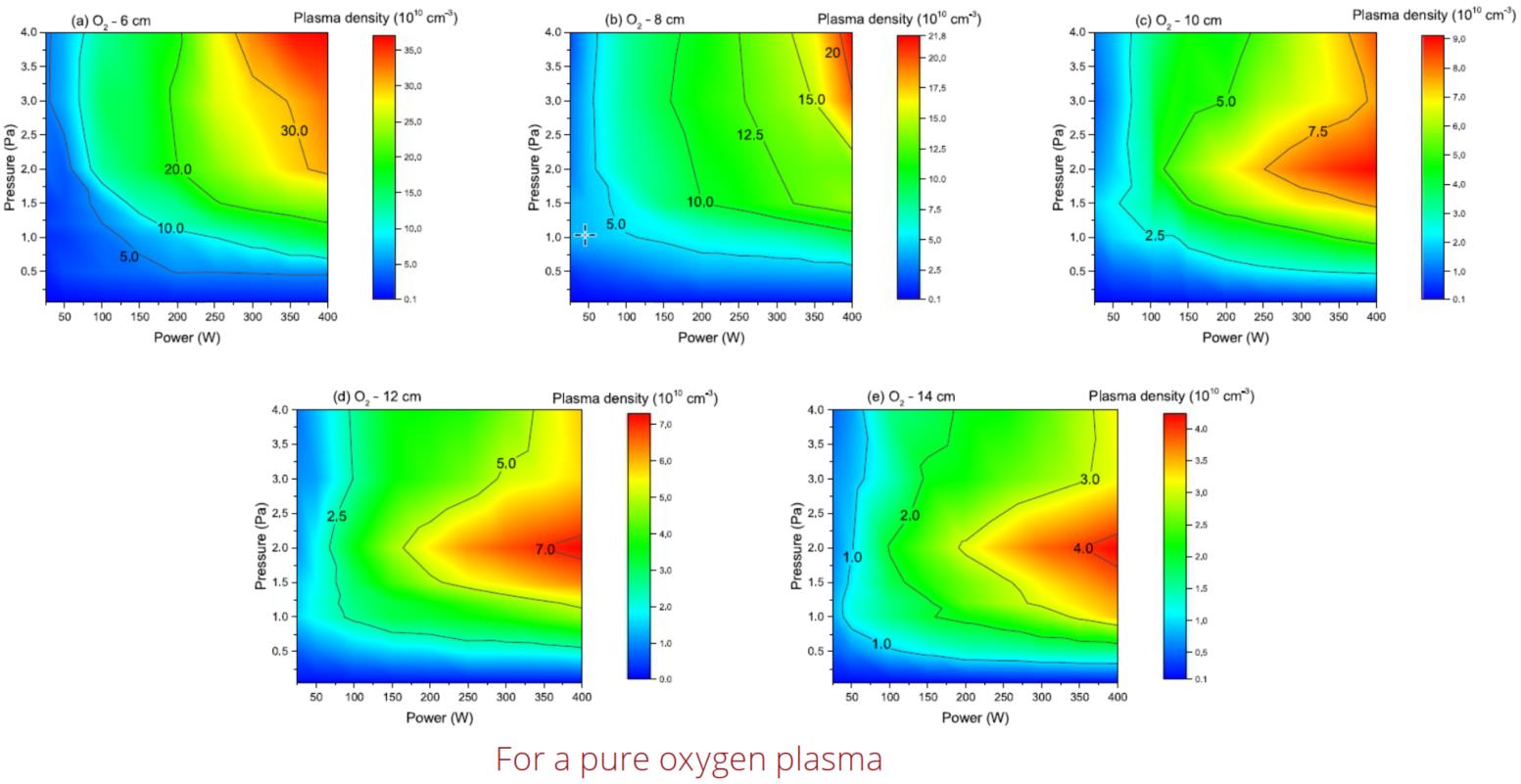 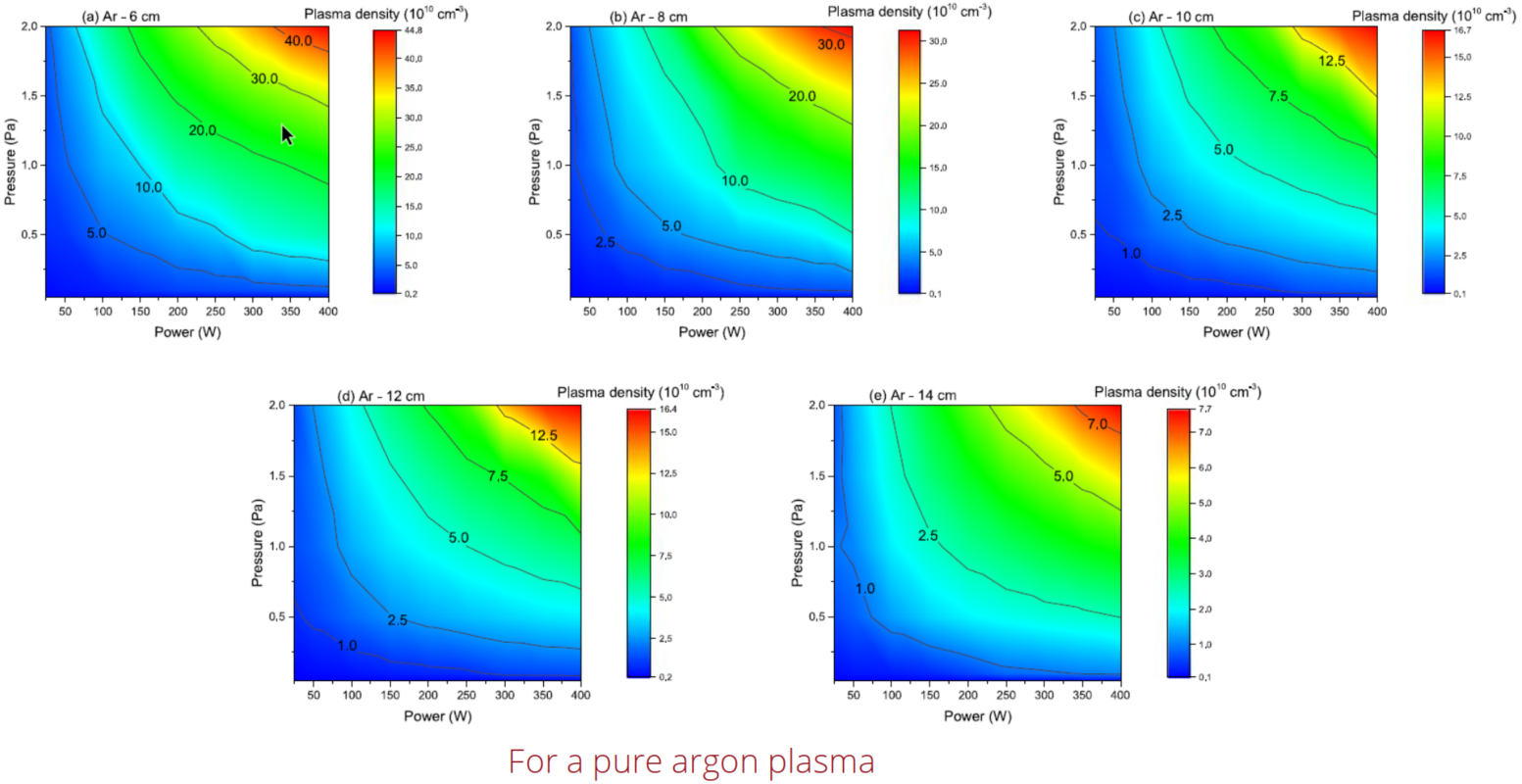 Figure 2. Ne as a function of power and pressure at (a) 6 cm, (b) 8 cm, (c) 10 cm, (d) 12 cm and (e) 14 cm in front of the center of the Aura-Wave plasma source. The density profile from Langmuir probe was integrated in the simulation software and projected in the 2D plan at the distance of acquisition. 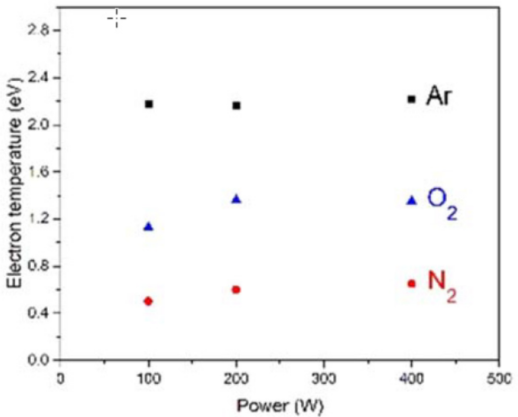 Figure 3. Variation of the electron temperature as function of power and for the three plasma gases measured at 1 Pa (at 10 cm from the source plane).

A complete database of the variation of the plasma density as function of plasma parameters has been created. Using an in-house developed software, using the created database, the plasma density of multi-source configurations has been calculated. Five examples of different configurations have been presented in this section. Comparison between simulated and experimental results is shown below and have shown perfect correlation. 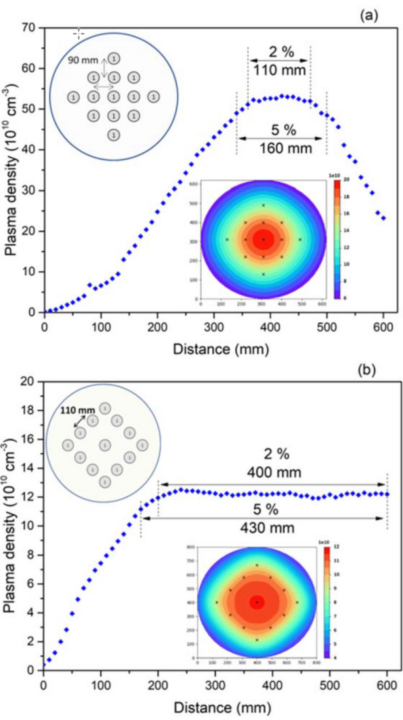 Figure 4. Simulated and measured density profiles for 13 AuraWave sources distributed in (a) quasi matrix configuration and (b) optimized configuration.

Figure 4 shows the simulated and measured plasma densities at 14 cm from the source plane, for 13 Aura-Wave sources for an argon plasma at 0.5 Pa sustained by microwave power of 400 W/source.

Figure 5 shows the simulated density distribution and the experimental curve for a matrix configuration of 25 Aura-Wave with lattice constant a =90 mm realized at 10 cm from the source plane for a nitrogen plasma at a pressure of 1 Pa.

Figures 6(a) and (b) show the density profile for a (3×3) matrix configuration (lattice constant a=110 mm) realized at 10 cm from the source plane at 1 Pa for a plasma of nitrogen and oxygen respectively. With external sources at 400 W, the simulations have shown best uniformity when the central source is at 110 W and 80 W for nitrogen and oxygen, respectively. 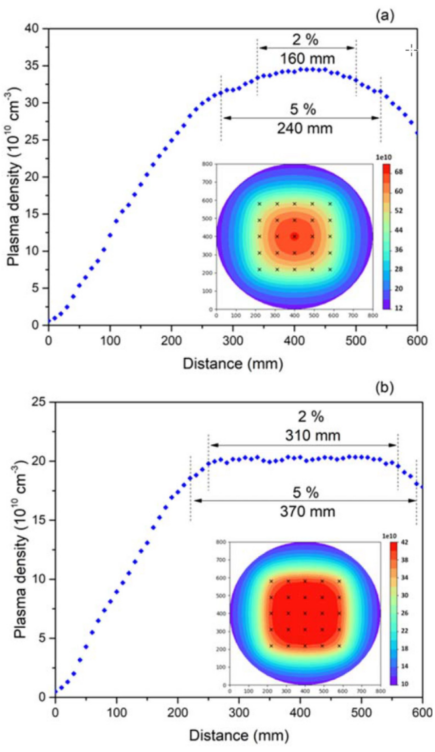 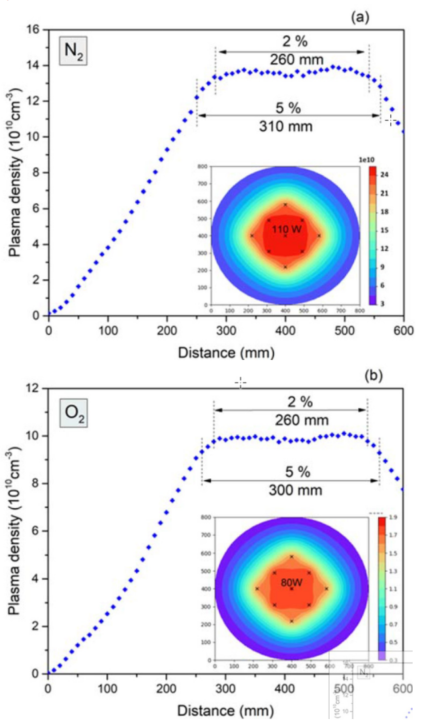 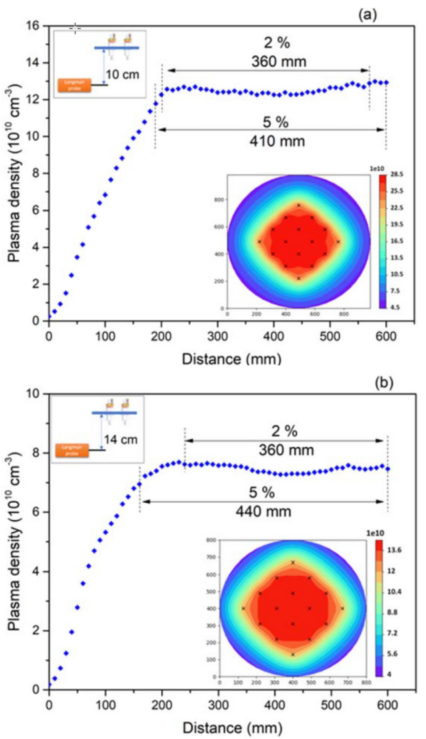 Figure 7. 2D simulation and Langmuir measurements of the plasma density distribution for a matrix configuration of 16 Aura Wave, for nitrogen plasma at 1 Pa, 400 W/peripherical sources, 150 W/central sources (5.4 kW total power) (a) at 10 cm, (b) at 14 cm from the source plane.

Figure 7 represents the simulated and experimental density obtained with 16 Aura-Wave distributed in a (4×4) matrix configuration with lattice constant a=110 mm realized at 10 cm (figure 7(a)) and 14 cm (figure 7(b)) from source plane for a nitrogen plasma at 1 Pa.

Figure 8(a) shows the plasma density calculated at 14 cm from the source plane for a nitrogen plasma sustained by 6 Aura-Wave at 1 Pa distributed in a linear configuration as shown in figure 8(b). A uniformity of 5% is found on 440 mm length.

Figure 8. Plasma density of a linear configuration of 6 Aura-Wave with b=90 mm at 14 cm from the source plane (a) Simulated curve (b) schematic view of the translation axis for the LP measurements and (c) experimental curve for each source (1.6 kW total power).

In this work, the performances of the microwave plasma source, ‘Aura-wave’ , have been investigated in terms of plasma density in the working pressure range between 0.1 and 4 Pa. The position and the power of each source have been optimized and the calculations have been validated by experimental measurements. High plasma densities > 1011 cm-3 over large areas > 400 mm in diameter with only 13 plasma sources have been achieved with all tested gases. The integration of these Aura-Wave sources in the cited processes, will allow an advanced optimization of the process with increasing its efficiency over large treatment surfaces.