In this application note, we present a novel method which can be applied to a planar retarding field energy analyzer (RFEA) for the measurement of ion angular distributions. Ion energy and angular ion distributions play a critical role in plasma assisted etching and conformal deposition processes. Ion impact at wider angles may be required for better step coverage in certain sputter deposition and ion implantation processes while large angle ion impact can be detrimental to anisotropic etch processes.

In the early 80’s, Stenzel et al developed a directional RFEA where particles are geometrically filtered through a micro-capillary plate prior to energy analysis. The high aspect ratio of the holes/channels in the plate allowed them to select particles within a geometric acceptance angle. The Vertex RFEA design has a variable AR, controlled using a potential difference between two grids (see application note VE02). A variable AR controls the ion angular spread passing through the sensor for detection. The Vertex product produces a plot of ion energy distribution versus AR.

Here, we introduce an analytical theory developed to define the ion current as a function of ion angle, ion energy, aperture geometry and aspect ratio. There have been no previous measurements of ion angular distribution measurements reported using a planar retarding field analyzer. The ion angular theory was derived by Sharma et al. Ions enter the RFEA through a physical aperture of fixed AR. 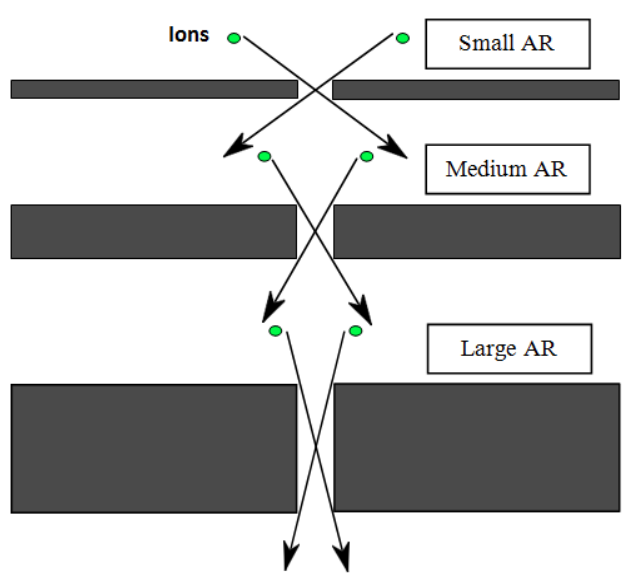 A potential difference applied across that aperture is used to vary the effective AR which separates ions with different angular spread shown in figure 1. The electrical fields within the RFEA are perpendicular to the surface. These fields alter the vertical component of the ion energy only. The vertical ion energy, perpendicular to the RFEA surface is denoted E┴ and horizontal ion energy component is denoted E‖ (see figure 2). If α is an angle of incidence at the top of the RFEA, then we can formulate the following equation:

Equation 1 suggests that the ion angular energy is determined by its vertical and parallel energy components. 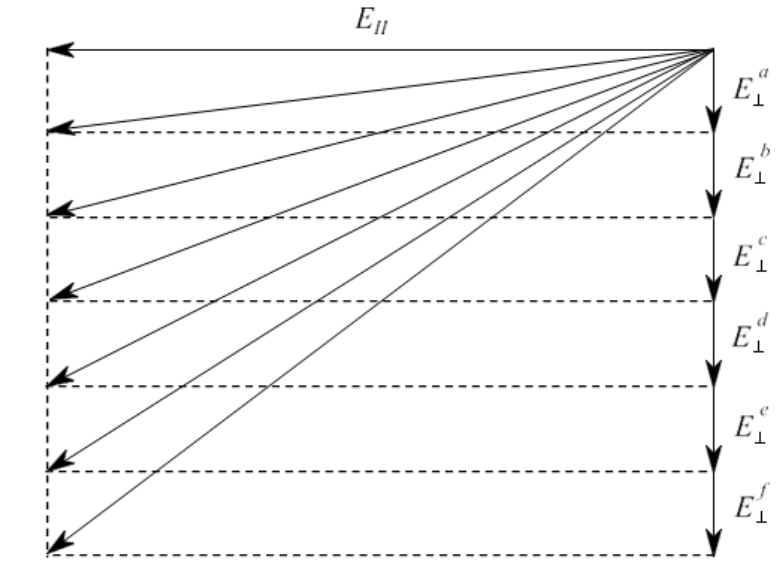 Figure 2. Determination of ion angle in terms of the parallel and vertical energy components.

To derive ion current as a function of ion angle, the geometry of the RFEA must be taken into account as illustrated in figure 3. We see that the aperture of the sensor has a radius R and a length L from the bottom side of the aperture to the top of the collection area. Ions entering from the top surface of the aperture are at some angle Φ. If Φ is small, then ion loss to the wall is much greater than ion current reaching the collection area. Also if Φ is close to or equal to 90°, then the ratio of ion loss to the wall is extremely low. The following equation was derived:

The derivation of this equation from first principles can be found in reference [3]. An experimental test of the theory was conducted using the RFEA structure shown in figure 4. 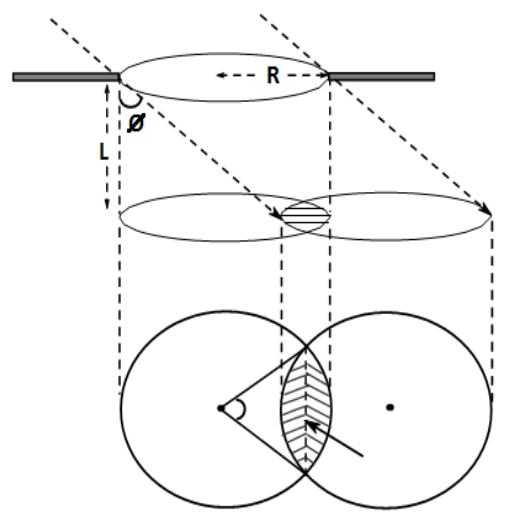 Figure 3. Shown is a geometrical visual of how to calculate the effective ion current collection area. 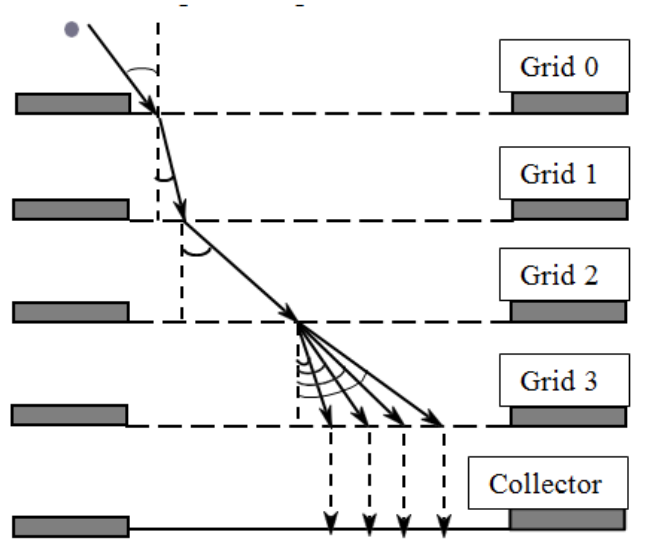 A capacitively coupled plasma (CCP) reactor generated with a 13.56 MHz RF power source was used. The top electrode was powered and the bottom electrode was grounded. The RFEA was mounted on the bottom electrode. Grid 0 is connected to the body of the sensor to stop plasma forming inside, this is electrically connected to the grounded electrode in this experiment. Grid 1 was set to -60 V relative to Grid 0 to repel electrons. Grid 2 was swept from 0 V to +50 V in 1 V steps relative to Grid 0 to select the energy window.

Grid 3 was swept from 100% to 40% of Grid 2 voltages, to discriminate the ions based on their incidence angle. The collector was set to -60 V relative to Grid 0 to collect and record the ion current as a function of grid potentials. A matrix of the recorded current values was constructed with varying Grid 2 potential across the rows and varying Grid 3 potential in the columns. A second matrix was constructed by taking derivatives across each row. From this the ion energy distribution as a function of ion angle can be determined.

For the plasma discharge used in the experiment it was expected that the ions would have low energy (~10 to 30 eV) with a narrow angle range close to normal incidence. The sheath electric field is sufficient to straighten the ions arriving at the surface of the RFEA. An example measurement is shown in figure 5. In this example, all most all of the ions appear to have less than 3° spread relative to normal incidence. More experiments are required to fully validate this measurement technique. 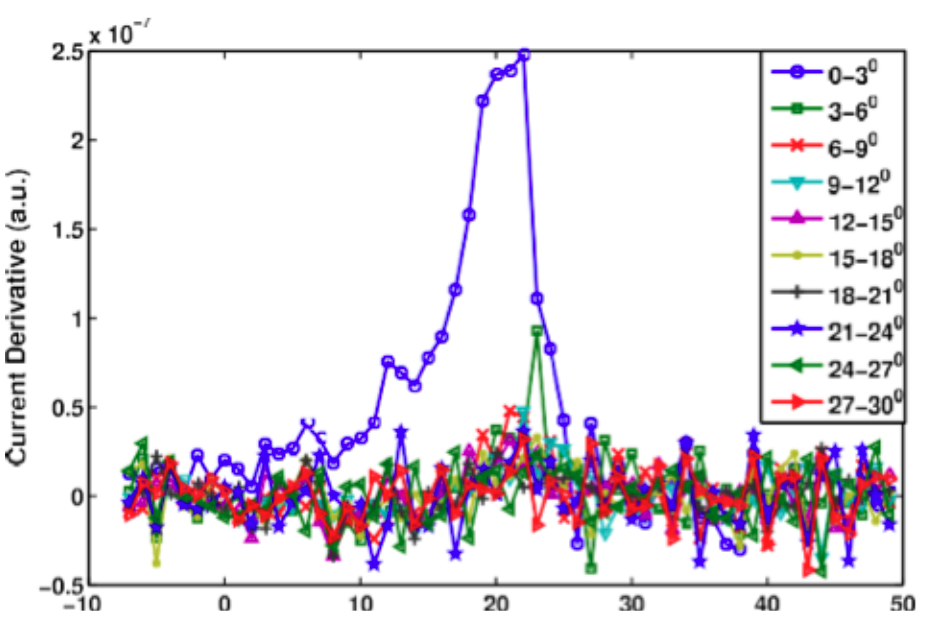 An ion beam with a well-known ion incidence angle would provide an ideal benchmark of the devices’ capabilities.