The external parameters which define plasma polymerization experiments (RF power and precursor flow rate) are unable to reproduce plasma polymer films by means of transfer between geometrically different reactors. This has been proven through the use of a geometrically varying parallel-plate electrode reactor. With constant RF power; ion flux and power coupling efficiency measurements demonstrate how variable plasma properties are. Manipulation of these parameters has been shown to be a more useful way of defining plasma polymerization processes.

In the decades since the 1960’s RF power, and flow rate or pressure, have been used as the external input parameters in plasma polymerization experiments. Despite having some benefits, this approach cannot forecast the effects it has on geometrically different reactors. This process’ ability to be installed in commercial applications has been damaged as a result. Ion flux has been shown to be a better parameter when trying to predict plasma polymerization processes.

It is possible to simulate low pressure RF plasma reactors with different geometries. This is achieved through the use of a capacitively coupled reactor with variable interelectrode distance. The experimental setup is displayed below. 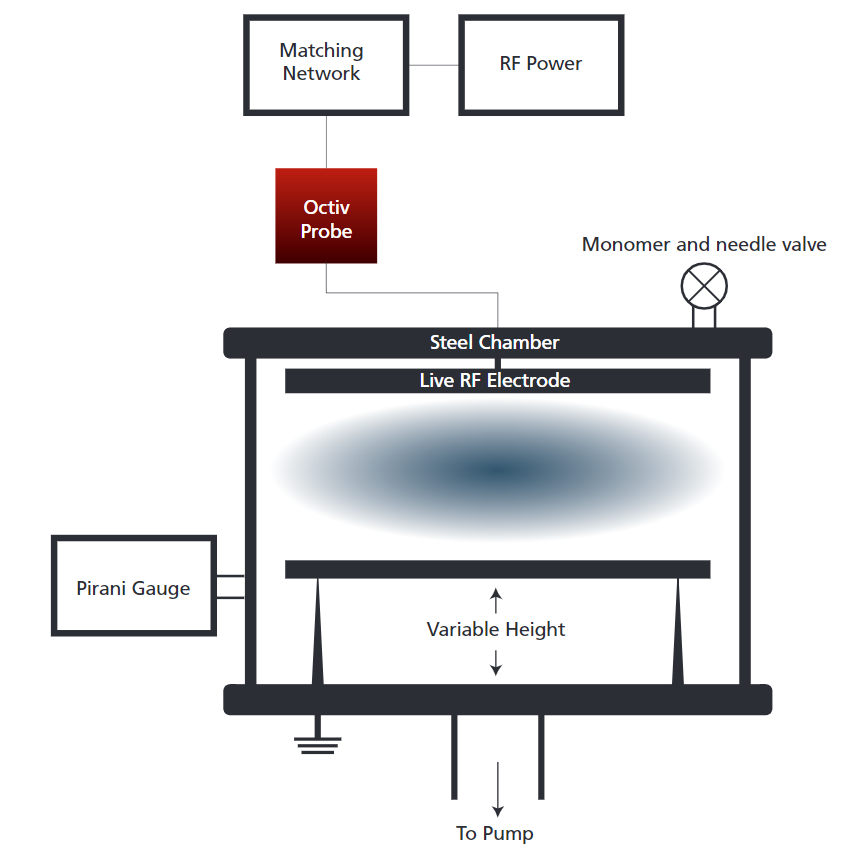 A rotary pump evacuates the chamber of air. Monomer flows into the chamber, at a rate controlled by a needle valve. The internal electrode is subject to an RF power of 13.56 MHz. Ion flux is measured by the Octiv Suite probe. The probe is positioned in series between the matching network and the RF electrode. A Quartz Crystal Microbalance (QCM), manufactured by Sycon Instruments, measures the deposition rate. It does this through the placement of a 6MHz gold crystal in the centre of the bottom electrode. Surface chemistry analysis was undertaken through the placement of silicon wafer substrates next to the QCM. QCM measurements were confirmed by the application of atomic force microscopy.

A SPECS SAGE spectrometer was used to record the XPS spectra. A binding energy range of 0-1000 eV was set to survey the spectrum and identify the elements within. Chemical binding states were determined by recording high resolution spectra. Taking into account surface charging, it is necessary to reference these binding states to the aliphatic C1s carbon peak. 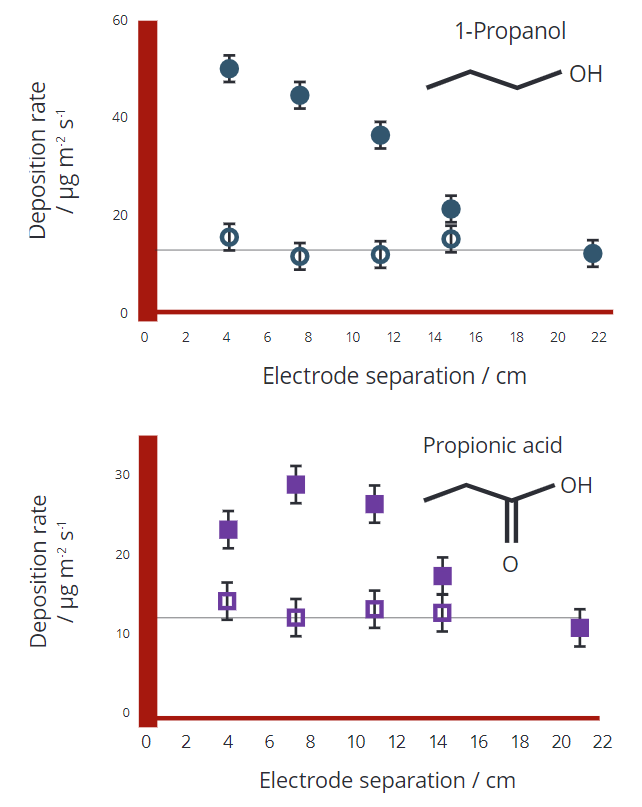 However, the same correlation was not discovered when the procedure was applied to acrylic acid. The deposition rate of acrylic acid is of the order of 3-5 times faster than propionic acid. 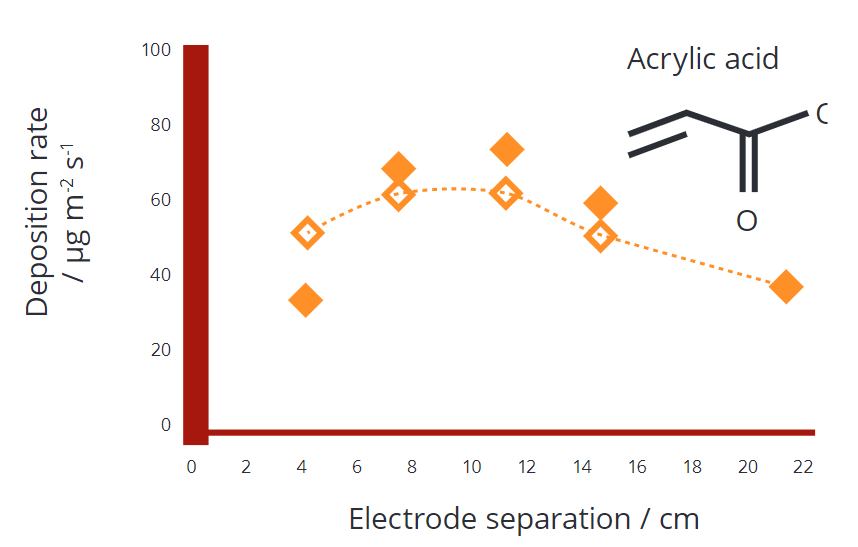 As can be seen from the 1-propanol and the propionic acid diagrams, the deposition rate is predictable when measuring with constant RF power and with constant ion flux. However, with acrylic acid, an accurate prediction is extremely difficult when relying on constant RF power measurements. Surprisingly, constant ion flux is shown to be a more reliable indicator of deposition rate for all materials. 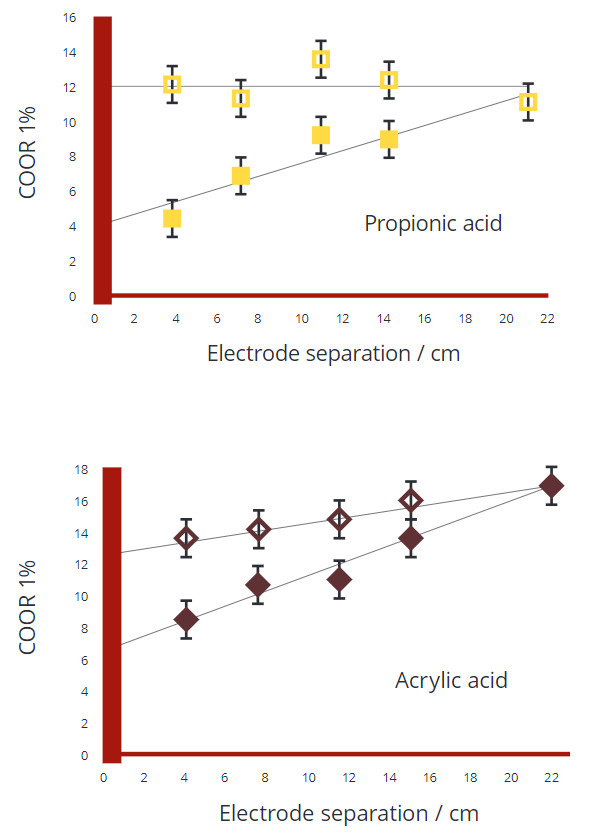 At the upper end of the electrode separation scale, the relationship between a 1D simulation model and the data gained from experimental procedure is very good. However, as the electrode separation begins to decrease, it becomes clear that the model underestimates the ion flux by up to 50%. Assumptions made, such as constant electron temperature, are believed to have caused this. Fragmentation increases in the plasma phase due to higher electron temperature. Higher temperatures also affect the ion sticking probability and the sputtering rate of the deposit.

The mass deposited per ion at the surface can be calculated by the following formula:

where Γi is the ion flux, mi is the ion molecular weight; Pi is the sticking probability of the ion and ks is the sputtering rate constant.

This experiment highlights that the measurement of external parameters, in relation to low pressure RF plasmas, is a poor representation of intrinsic plasma parameters. Due to the effect of reactor geometry, these parameters provide little use in terms of reproducing films in geometrically different reactors. It has been shown that, when attempting to predict deposition rates, ion flux is a better parameter to use than RF power. This deduction holds for 1-propanol, propionic acid and allyl alcohol but less so for acrylic acid, although ion flux is still more reliable than RF power. This is due to the range of deposition mechanisms that can be applied. It is predicted that these results are applicable to multiple types of plasma; not just low pressure, continuous plasma.