Thin films of various materials are deposited on semiconductor wafers for a variety of applications in integrated circuit manufacturing. The rate of deposition is controlled by neutral and ionic species arriving at the substrate surface. In sputtering processes, the ionization fraction, defined as ratio of ion to total (total = ion + neutral) deposition rates, is mainly determined by the applied cathode power, chamber pressure and the target material (since the ionization potential is material dependent). Thin film quality and deposition rates are strongly dependent on the fraction of ionization and therefore measurement of ionized flux fraction at the substrate is becoming crucial for process development and control.

A compact retarding field energy analyzer with embedded quartz crystal microbalance (QCM), known as the Quantum system, has been developed to measure deposition rate, ionization fraction and ion energy distribution arriving at a substrate location. In the design, the collector plate has been replaced by the front facing electrode of the quartz crystal as shown in figure 1. The theory and concept behind this has been described in a previous application note.

The quartz crystal provides a direct measurement of the deposition rate at the substrate location while the analyzer grids can be configured to turn on and off the ion flux. 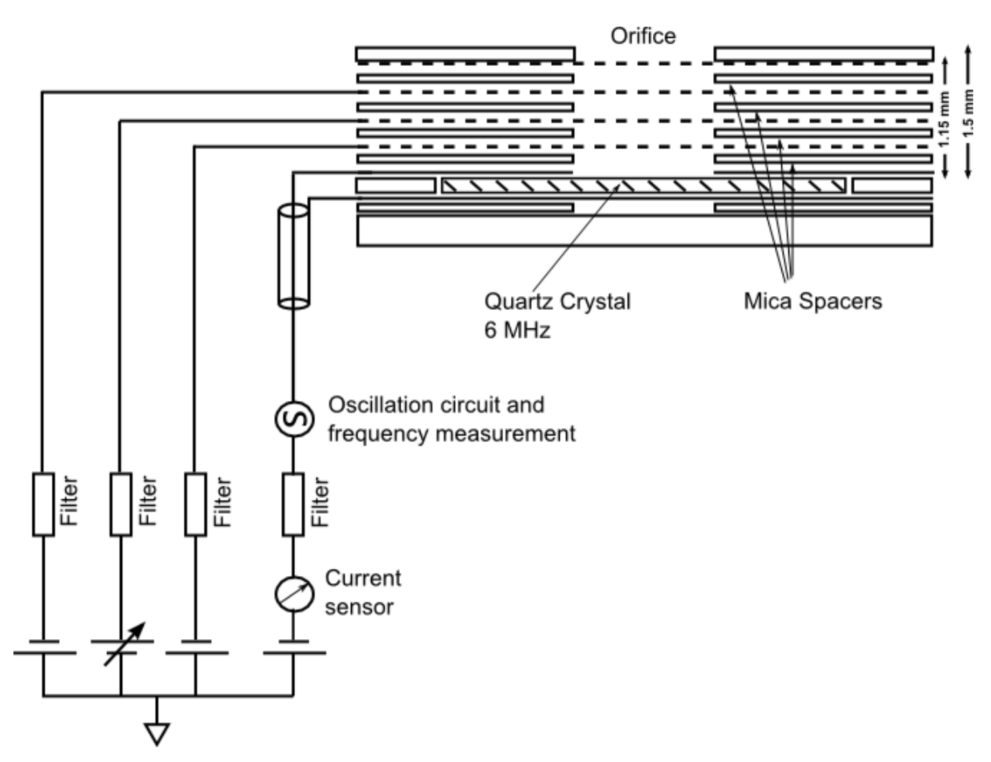 In this way the deposition rate can be determined when both neutrals and ions are present and when only neutrals are present. From these two measurements the ionized flux fraction and neutral flux fraction can easily be determined. The sensor can be placed on grounded, electrically floating or radio frequency (rf) biased electrodes and is suitable to characterize HiPIMS and traditional pulsed sputtering processes.

Using a piezoelectric quartz crystal resonator to measure deposited mass was first introduced by Sauerbrey in 1959. The resonant frequency of the crystal was found to change proportionately with the mass of a uniformly deposited layer on the crystal surface.

Figure 2. Schematic of the measurement crystal and the calibration crystal as used in the Quantum system design.

The Sauerbrey equation which relates the change in resonant frequency, Δf, to the deposited mass, Δm, is given by:

where Cf = (2f02) ⁄ (A√(ρqμg)) is the sensitivity factor of the quartz crystal. The validity of Sauerbrey’s equation applies to systems in which the following conditions are met: the deposited mass must be much less than the that of the quartz crystal, the deposited mass must be rigid, distributed uniformly and the frequency change ∆f / f0 ≤ 0.02. The experiments reported in this application note are within the Sauerbrey regime (outside these conditions, the Z-match method must be used).

The flux fraction that reaches the QCM though the instrument stack was determined empirically and is referred to as the geometric factor, G, which is a function of pressure. Taking the geometric factor and the analyser grid transparency into account, the QCM deposition rate is given by 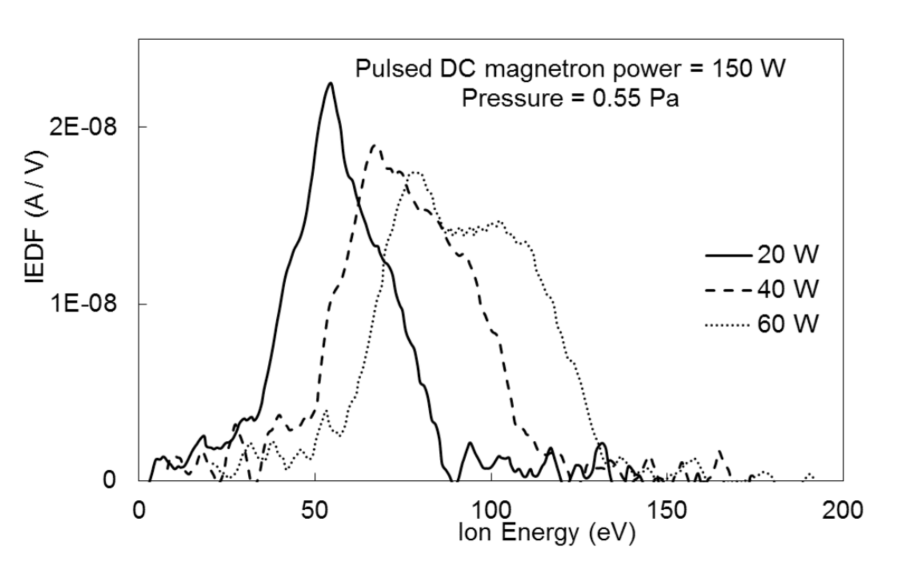 To compensate for temperature variation effects in the measurement quartz crystal (QCM1), a calibration method utilizing a second, reference crystal, is implemented. As shown in figure 2, the measurement crystal on the left is open, allowing a measurement of the ion-neutral deposition. The calibration crystal (QCM2) on the right, which is used as a reference, is sealed from any deposition by a closed electrode at the top. As a result, there is no measured deposition at this crystal surface. This leads to a frequency change that is caused purely by temperature variations.

The resonant frequency of QCM1 which is the corrected frequency, fN, after temperature compensation using QCM2 is calculated from

where f0(QCM2) is the initial resonance frequency of QCM2. 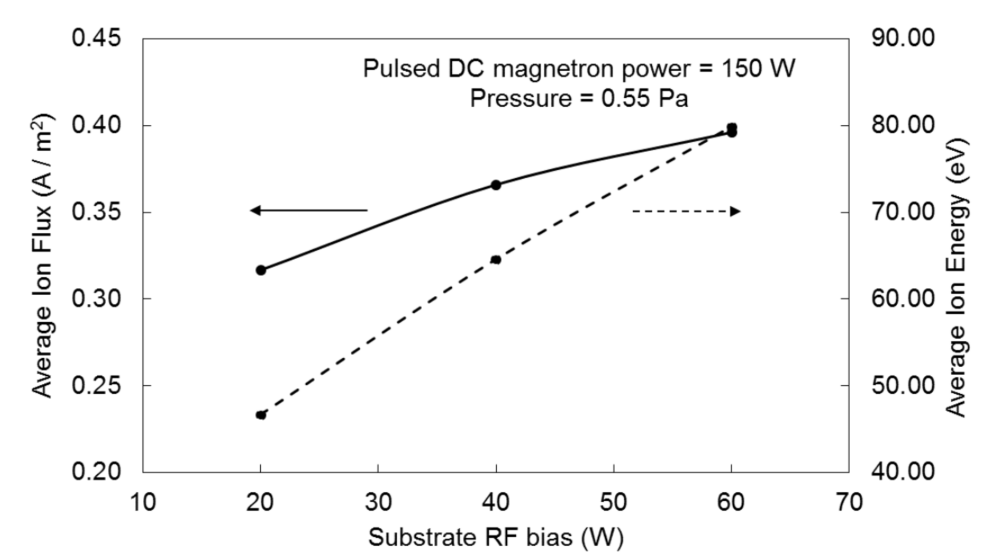 One of the main goals of this study was to demonstrate the ability of the developed RFEA-QCM design to measure deposition rates at rf biased substrates. To enable this, an additional rf bias has been applied to the substrate holder.

The IEDF exhibits a broadening towards the commonly seen bimodal structure when rf biased plasma sheaths are present. This structure is a consequence of the interaction between rf biased substrate and p-DC driven discharge. With increasing rf bias the IEDF shifts towards higher energies as shown in Figure 3. Along with the shift to higher energy a broadening in the IEDF is also visible, consistent with the increased rf voltage drop on the plasma sheath. The average energy of the distribution increases with increasing rf bias. The total ion flux (area under the IEDF curve) also increases with increasing rf bias which shows that the rf bias contributes to setting the plasma density. The effect of rf biasing (at 13.56 MHz) of the substrate on the IEDF, Average ion energy and ion flux is shown in figure 4. 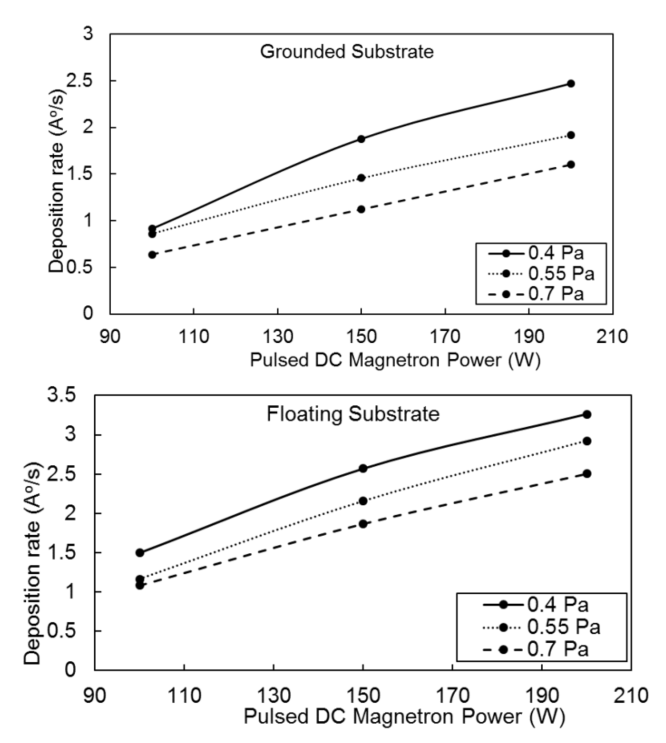 At a p-DC power of 150 W, deposition rates are measured with and without ions (by applying a potential of +150 V at G2/G3/Collector of the RFEA-QCM diagnostic). Figure 6 shows the deposition versus time graph for a typical run. The initial part,  up to 100 s, of the curve shows the accumulation of Cu when only neutrals are incident on the QCM. The second half of the curve (from 100 to 200 s) the voltage bias is turned off and the graph shows the deposition due to both neutral and ion impact. By comparing the slopes of two segments it can be seen that the deposition rate drops by 13% when the ions are allowed in. The decrease in deposition rate is due to the presence of energetic ions which causes metal neutrals to re-sputter during the deposition process and return to the vapor phase. The overall deposition is therefore a compromise between two competing processes, firstly the deposition of metal neutrals and secondly the re-sputtering of deposited material by the energetic Ar+ ions. 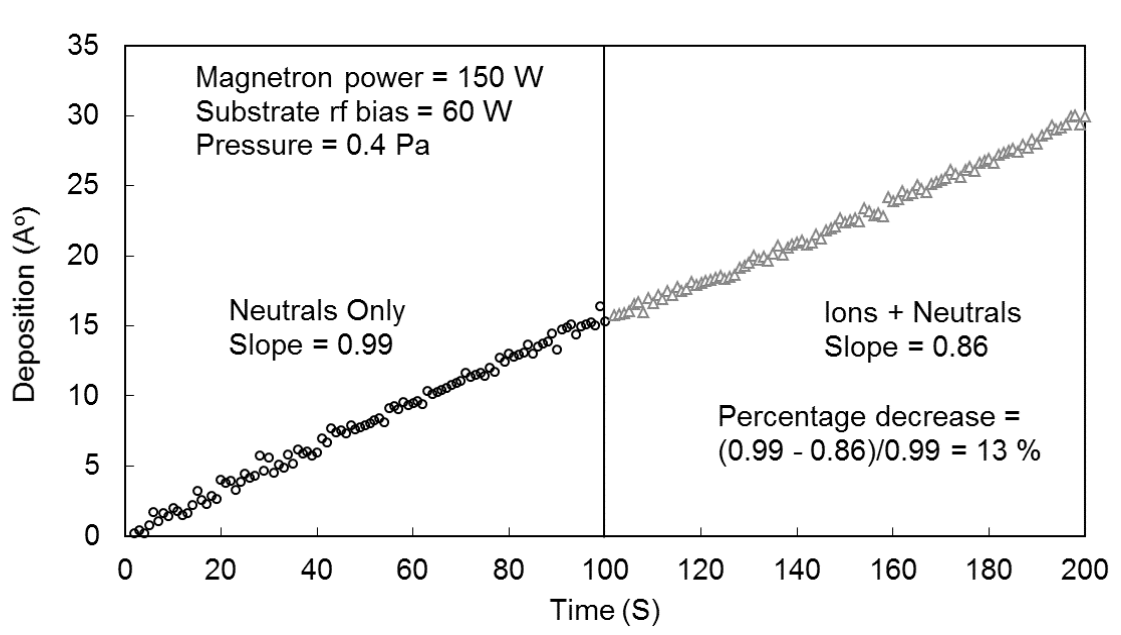 When the ions are stopped and only neutrals are allowed, no re-sputtering occurs and higher deposition rates are observed.

By comparing the net deposition rate to the QCM with and without ions, the ionization fraction of Cu has also been determined from the difference between the ion and neutral deposition rates. For p-DC power of 200 W   the ionized metal flux fraction on the  floating substrate was estimated to be approximately 0.2% across the range of powers and pressures investigated. The ionized metal flux fraction was determined to be less than 5% which is also estimated to be the resolution limit of the device based on multiple measurements under the same conditions. In other words, there is a negligible fraction of Cu ionization measured in this deposition process. The negligible ionization fraction measured in the p-dc system used in our study is as expected because no additional rf plasma was introduced and chamber pressures were ≤ 0.7 Pa.

A compact retarding field analyzer with integrated quartz crystal microbalance has been presented. This device can measure the IEDF, deposition rate, and the ionization fraction in a plasma process. It can be placed on a grounded, floating, or rf biased electrode without modifying the electrode geometry. The RFEA-QCM1 design does not require water cooling since a method utilizing a reference crystal is implemented to compensate for temperature variations. The IEDF, deposition rate, and Cu ionization fraction are investigated in an asymmetric bipolar p-DC sputtering reactor.