The modification of surfaces through plasma processing is widespread in modern industries. Examples of this include plasma deposition of thin films and plasma etching of intricate features for integrated circuit manufacture. These processes are heavily influenced by energetic ion bombardment of the work-piece surface. For example, the ion energy distribution impacting a semiconductor wafer surface influences both the etch rate and etch anisotropy.

Ion energy distributions functions (IEDFs), measured with retarding field energy analysers (RFEAs), are often reported in the literature. This ‘IEDF’ is generally calculated by taking the first derivative (dI/dV) of the ion current (I) versus retarding potential (V) characteristic measured with the RFEA. However, it can be shown that (V) is proportional to the ion velocity distribution function (IVDF) and not the IEDF as is sometimes thought.

where A is the area of the sampling orifices, Ii is the total positive ion current entering the analyser and f(E) is the ion energy distribution. By definition, dn=f(v)dv=f(E)dE and therefore dv=f(E)dE/f(v). Since dE=d(½ Miv2) then dv=dE/Miv . Substituting for dv in  equation (2) gives

The ion current enters the analyser through a sampling orifice(s). A negatively biased mesh, parallel to the orifice plate, repels any incoming electron current back towards the orifice/plasma. A retarding potential applied to a second mesh generates a retarding field for the incoming ions. The retarding field is gradually incremented from 0 eV, which allows ions of all energies/velocities to ions from passing through the mesh. An I–V characteristic is constructed by plotting the measured ion current at each retarding potential.

As the retarding potential is increased from V=0 to higher positive values, the measured f(E) is reduced due to less energetic ions being repelled by the retarding field. The ion current to the collector can be written as

where Emax is the maximum ion energy in the incoming ion energy distribution. Since Emax is independent of the retarding potential, the derivative of (4) becomes

What Does It All Mean?

It means that dI/dV, which is measured with the RFEA, is proportional to f(v) – the ion velocity distribution. So, a typical RFEA produces a plot of IVDF versus energy! What this means in general is that the derivative of the RFEA ion current versus energy curve has come to be known as the IEDF, which tends to cause some confusion.

To illustrate this, a RFEA was used to determine the IVDF and IEDF at the grounded electrode in a rf CCP reactor with an Argon plasma at 2 Pa. The source power was 20 W at 13.56 MHz. 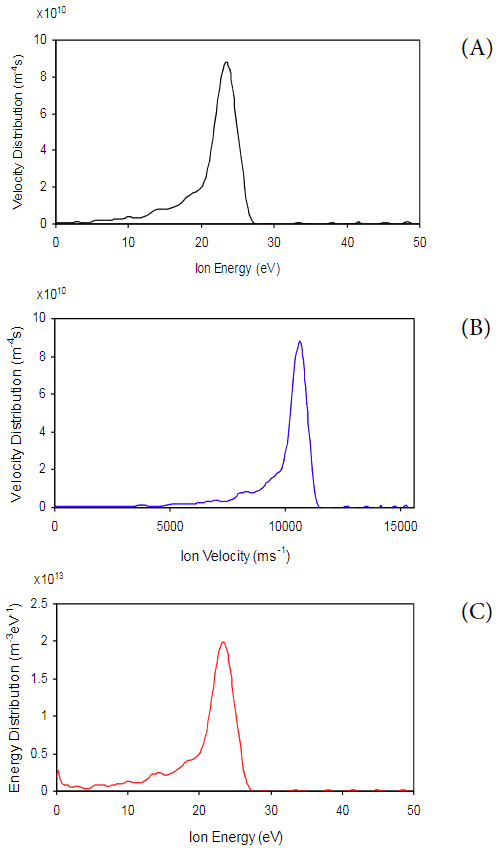