Dusty plasmas are used for a variety of applications in the space industry, industrial manufacturing and laboratory research. Electromagnetic wave propagation through dusty plasma has seen considerable re-search interest recently, particularly due to the direct relevance to plasma diagnostics, space exploration, re-entry physics and broadcast communication. For instance, exhaust plumes from rocket thrusters may be regarded as weakly ionized dusty plasma containing a large number of aluminum oxide particles created in the course of fuel combustion. Consequently, it is highly necessary to consider the influence of dust particles on plasma properties, especially when investigating the “re-entry blackout” phenomena.

Laboratory research on electromagnetic wave propagation in plasma requires large-volume plasma chambers. This can be achieved by using cylindrical constructions with solid or gridded hollow cathodes which permits creating a large-volume glow discharge plasma. In a recent study, an AC glow discharge plasma was created in a chamber of such configuration and was then used for conducting experiments on electromagnetic wave propagation in plasma with dust. In this paper, the authors present the results of experimental and numerical investigation of dusty plasma created by an AC glow discharge in argon in a coaxial gridded hollow cathode with input of dust nanoparticles made of Al2O3. Simulations were carried out using an approach that was developed specifically for these experimental conditions. 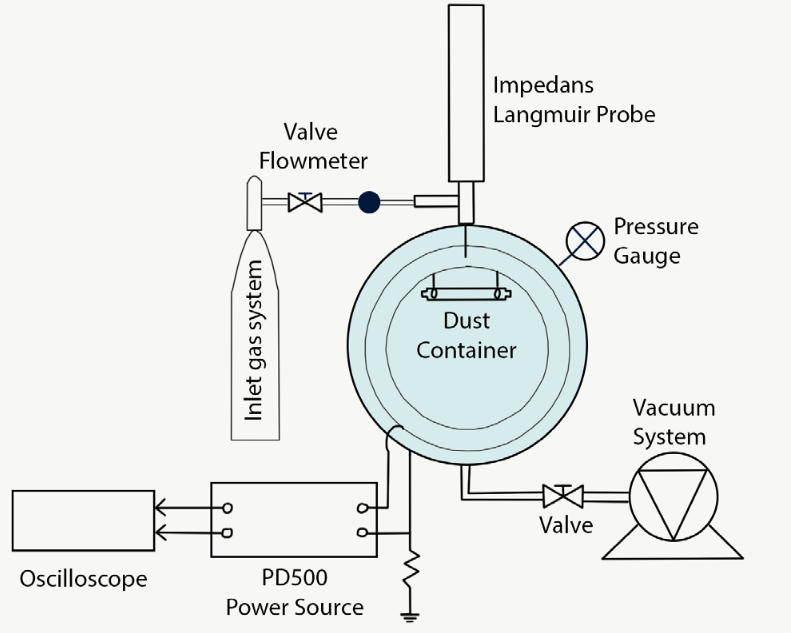 Different types of discharges and plasma objects were altered to ac-count for the contribution of charged dust particles to net charge and loss of ions and electrons on the particles’ surface. Experimental measurements were carried out using an Impedans Langmuir probe.

The dusty plasma was produced in a large-volume AC glow discharge device, which is sketched in Fig. 1. The chamber is a coaxial gridded hollow cathode 0.4 m long and 0.5 m in diameter. Gridded cylindrical electrodes were made of stainless steel with a distance of 3 cm between the grids. There are 60 × 13 orifices on the inner grid and 82 × 13 orifices on the middle grid with a diameter of 1 cm.

The device also has two observation port-holes made of borosilicate glass on both sides, and an inlet gas system on the top to control the amount of inlet gas. The discharge power could be set in the range of 0~2000 W. Experiments were carried out at pressure 25 Pa in argon. Nanosized particles were introduced into the plasma with a cylindrical container with radius 3 cm and height 1.5 cm, located in the upper part of the chamber. The bottom of the container was made up of a metal mesh with spacing of 3 μm. Dust powder of Al2O3 is placed into the container, which is dropped into the plasma when the container is vibrating. Inside the container, a vibration apparatus was fitted with a timer to make the dust particles drop at the appointed time. When the container was shaken, particles rained down into the chamber and fell to the bottom of the container. Insertion of dust particles using this method allowed for the assumption that the dust density in the plasma is close to uniform during experiments. An electronic scale was used for measuring the mass change before and after the experiment to estimate the dust density in the plasma. Probe measurements of the electron density were carried out using the Impedans Langmuir probe system. The probe was made up of a tungsten tip with a diameter of 100 μm, which was placed at the top of the chamber perpendicular to the discharge axis. The measurements were interpreted using the ideal Langmuir probe model for a cylindrical probe. Dusty plasmas are also known as “complex plasmas,” as they can have a massive influence on plasma properties. 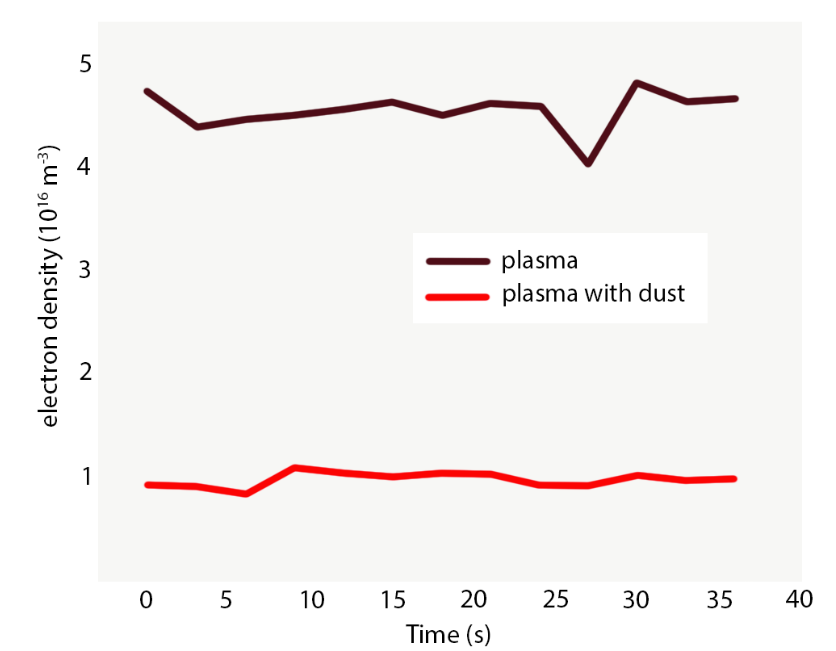 Fig 2: Measured electron density in the center of discharge chamber.

To be able to create a simulation that could provide estimates of the influence of dust on the plasma properties, it is essential to fully understand the underlying physics of the dust particle charging process, distribution of the electric field around charged dust particles and their dependence on basic plasma properties, such as electron and ion densities, temperatures, and electric potential.

The container was set to vibrate for a period of time, dropping dust particles which moved through the plasma and then fell to the bottom of the discharge chamber. The electron density was measured in the center of discharge chamber by a single Langmuir probe. Poisson’s equation was rewritten to account for the contribution of charged dust particles on the electric potential distribution:

For simulation purposes the geometry is reduced to 2-D with axial symmetry. The radius of the orifices were smaller than the actual one to represent the overall transparency of the real grid. Simulations were carried out in a cylinder with dielectric sidewalls, assuming axial symmetry of the discharge. Electron density measurements with and without dust are shown in Fig. 2. As shown in the diagram, the electron density in the case of dusty plasma during the whole experiment is almost constant. Adding dust into the plasma results in a decrease in density by a factor of 5. 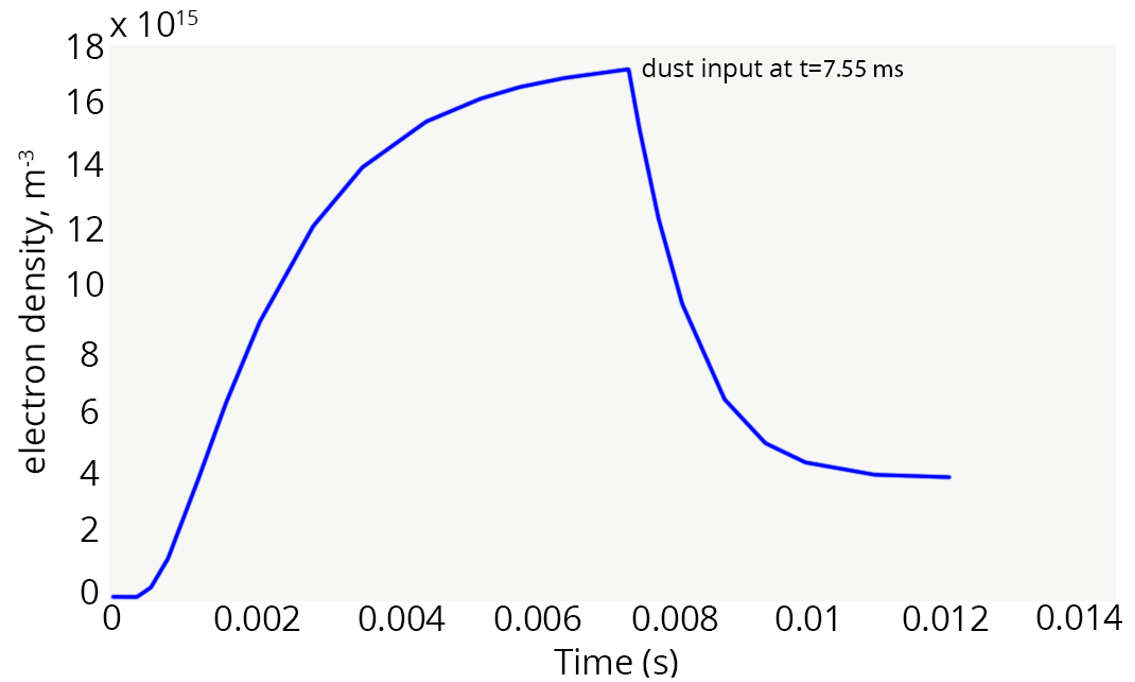 2D simulations of the electron density for times t1 and t2 show that the plasma density in the center of the discharge chamber also decreases by a factor of 5, which corresponds well with experimental results. The difference between the measured and simulated values is attributed to a well-known issue of the fluid model approach that tends to give lower plasma densities than those observed in experiment.

A shift of maximum electron density from the center of discharge chamber to the near-grid region can be observed. The uniform dust distribution in the plasma acts as a uniform sheet for both electrons and ions. Charged particles are more likely to recombine on dust particles surface in this region as the ionization rate is higher in the area of the electrodes.

Experimental investigations of the influence of dust nanoparticles on glow discharge plasma properties were carried out. A novel approach to dusty plasma simulation was developed specifically to be able to suit the present experimental conditions. Specially designed Al2O3 nanoparticles were injected into ac glow discharge plasma created in a large-volume co-axial ridded hollow cathode. An extended fluid model approach with drift-diffusion approximation for the electron and ion fluxes was modified to account for charged dust nanoparticle’s contribution to net charge and for ion and electron loss on the surface of particles. To capture the influence of dust on plasma properties both measurements and simulations were carried out for cases with and without dust. Electron density at the center of discharge chamber was measured using a single Langmuir probe. Under the conditions studied, a decrease by a factor of 5 caused by dust input was observed. Furthermore, simulations showed correlating results.