RF inductively coupled hydrogen plasmas have many applications including plasma etching for semiconductor processing and neutral beam generation for fusion experiments. A better understanding of the physical processes that govern the hydrogen plasma properties will enable better plasma control.

In this study, the authors investigate the characteristics of the electron energy probability function (EEPF) in an expanding, hydrogen, inductively coupled plasma powered separately at 2 MHz and 13.56 MHz. The power level was fixed at 1.5 kW and the discharge pressure was varied. Two key findings are presented a) EEPFs in the driver region change from tri-Maxwellian to Maxwellian when pressure increases showing that the electron heating mechanism changed from stochastic heating at low pressure to Ohmic heating at higher pressure and b) a transition between local and non-local electron kinetics is identified under certain conditions. Good agreement is found between the experimental results and the results from a COMSOL model of the plasma. No significant difference was found between the 2 MHz and 13.56 MHz driving frequencies.

The experimental setup is illustrated in figure 1. An Impedans Langmuir probe was used to measure the electron temperature, electron density and EEPF across the driver and expansion regions. The tungsten wire tip had a diameter of 0.2 mm and length of 6 mm. The plasma is formed in the driver region using 2 MHz or 13.56 MHz RF power. The power delivered to the discharge is held constant at 1.5 kW for all experiments presented. The source (driver region) is constructed from a quartz tube with diameter of 120 mm and height of 140 mm encompassed by a three-turn, water cooled antenna used to inductively couple the power to the plasma. 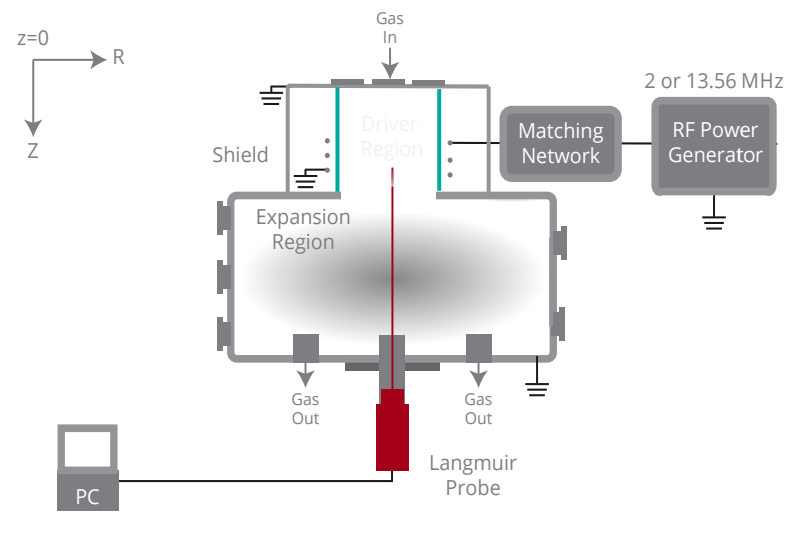 The experimental results obtained with the Langmuir probe are compared against the results obtained from a hybrid plasma model developed using the commercial modelling package, COMSOL Multiphysics. 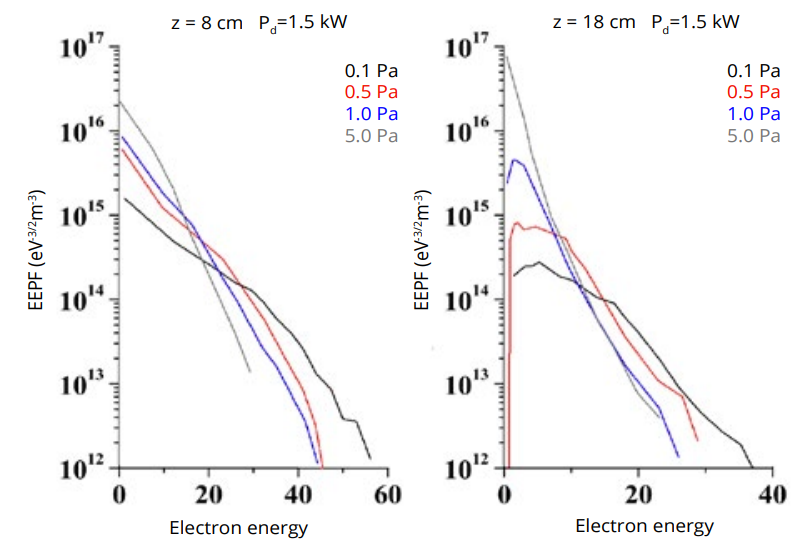 Figure 2. EEPFs measured at different positions and at various
pressures in a 2 MHz discharge 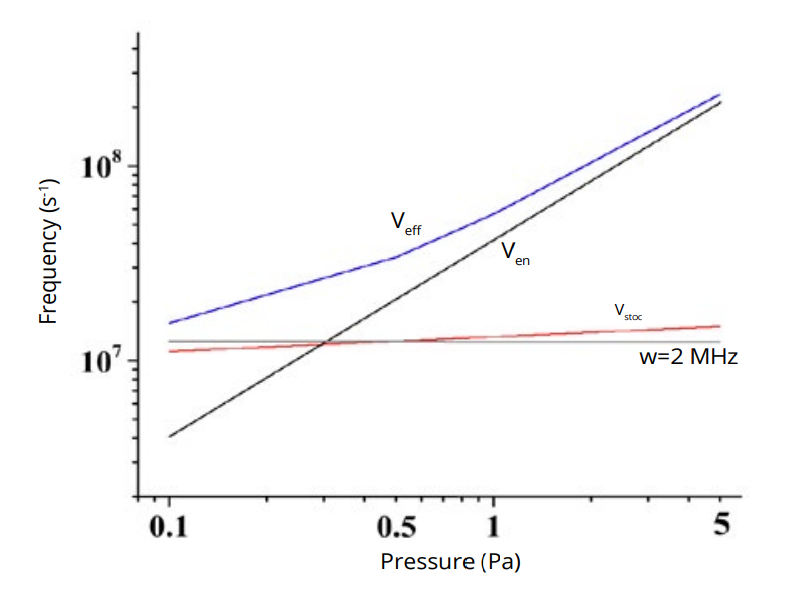 Figure 4 shows EEPFs measured at different axial positions and at different pressures for a 2 MHz, 1.5 kW plasma. At 0.1 Pa the EEPFs are very similar across all axial positions except for the loss of the low energy electrons. At 0.1 Pa the electron energy relaxation length is greater than the chamber dimensions. Electrons created in the source region travel through the entire plasma volume without energy loss. The electron kinetics are thus said to be in the non-local regime. At 0.5 Pa the EEPFs agree well in the source region since the relaxation length in this region is still greater that in significant differences between EEPFs in the source and expansion region. There is a clear transition from the non-local to local electron kinetics due to the further decrease of the electron relaxation length. At 5 Pa the effect is more pronounced as expected.

In figures 5 and 6 the axial profiles of the electron density and electron temperature (respectively) are shown. The electron density peaks in the source region and then decreases monotonically with distance into the expansion region for all pressures and both frequencies. The electron temperature, on the other hand, is approximately constant in the source and decreases in the expansion chamber at pressures of 1Pa and below. There is good agreement between the measurements and the COMSOL model at 5 Pa. The agreement is not as good at 1 Pa but understood to be due to limitations in the model at lower pressures. 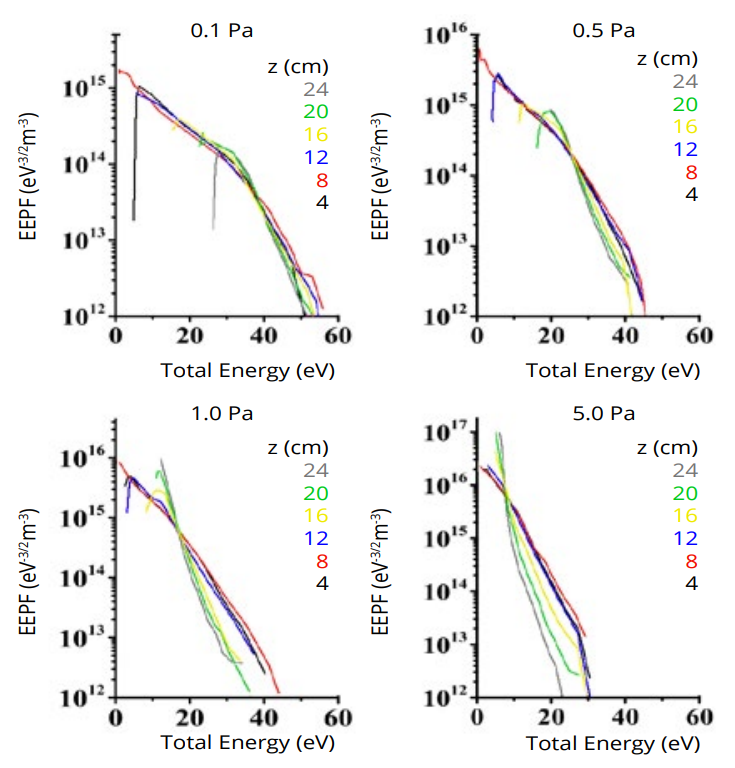 Figure 4: EEPFs measured at different axial positions for a range of
discharge pressures. 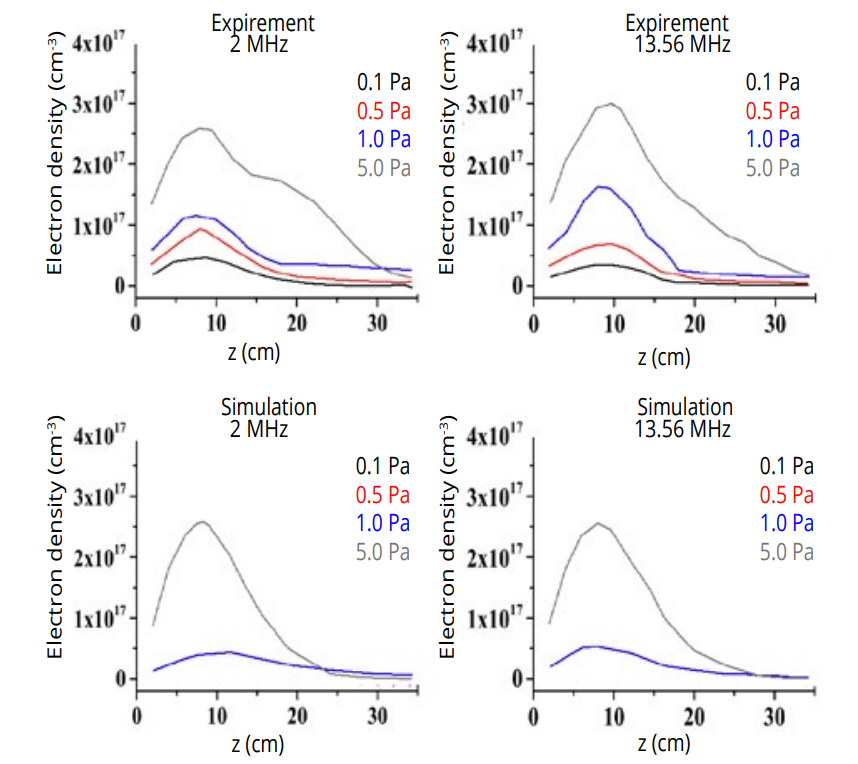 Figure 5. Axial variation of the electron density as a function of
pressure at 2 MHz and 13.56 MHz as measured experimentally and
calculated using the simulation. 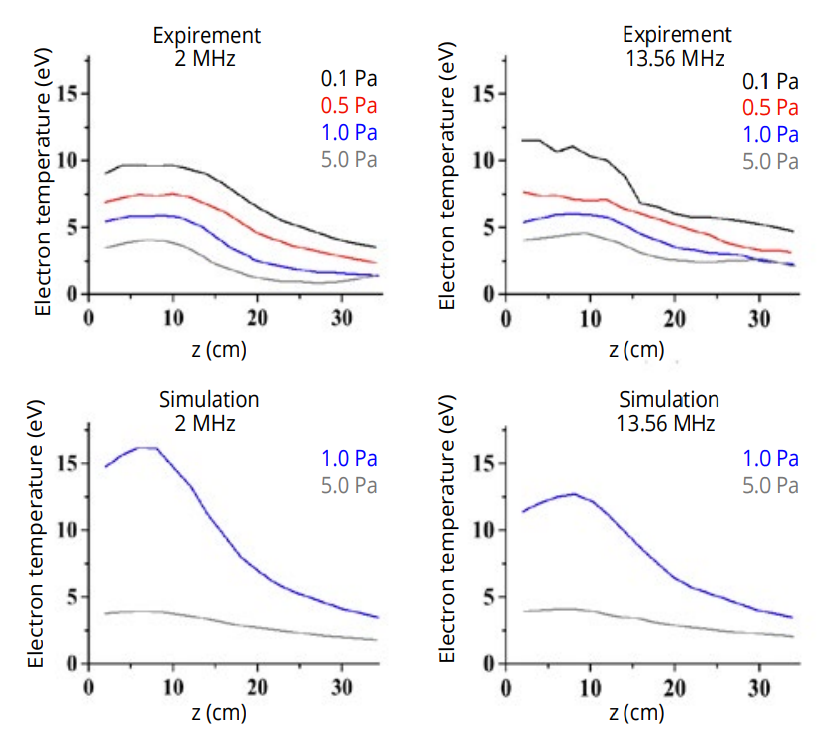 Figure 6: Axial variation of the electron temperature as a function of discharge pressure at 2 MHz and 13.56 MHz as measured
experimentally with the Langmuir probe and calculated using the
simulation.

The Impedans Langmuir probe system was shown to be an ideal tool for measuring the characteristics of the electrons in an inductively coupled hydrogen plasma, consisting of a source and expansion region. By accurately measuring the EEPFs the user was able to make detailed observations about electron collisions, stochastic heating, Ohmic heating and the transition from local to non-local electron kinetics.