The application of tailored voltage waveforms to excite radio frequency (rf) discharges offers a promising new direction for advanced control of particle flux energy distribution functions in low-pressure materials processing plasmas. Manipulation of the bias voltage waveform shape to produce ion energy distributions (IEDs) with one or two narrow peaks at selected energies has been previously utilized to highlight the significant role of the IED in plasma etching. In this regard, this paper demonstrates the ability to predictably produce arbitrary IEDs at the substrate by tailoring the shape of the bias voltage waveform. For this direct IED measurements were made in helicon argon plasma using Impedans Retarding Field Energy Analyzer (Semion) situated on a biased electrode, followed by a comparison with the theoretical predictions of IEDs.

The schematic diagram of the experimental setup is shown in figure 1. The substrate bias power supply consists of an arbitrary waveform generator and a broadband rf power amplifier (models ENI A500 and ENI A1000, 300 kHz–35 MHz) connected via a blocking capacitor to the substrate electrode. This power supply is used to produce both sinusoidal and tailored bias voltage waveforms at the electrode. An electrically floating RFEA (Impedans-Semion) is integrated at the center of  an aluminum disk 180 mm in diameter, matched to the electrode diameter. The operating argon gas pressure and helicon rf power (13.56 MHz) for plasma production are 10 mTorr and 300 W, respectively.

In present study, the amplitude and phase of the harmonics are adjusted to produce the desired waveform. Presentation of the measured IEDs is followed by theoretical predictions based on computed ion trajectories in the sheath, made using recorded bias voltage waveforms to estimate instantaneous sheath voltage.

Figure 2. A tailored waveform with a single voltage level at approximately 100 V to produce an IED with a single narrow peak at near 100 eV.

Figure 3. Sinusoidal electrode bias voltage waveform with a peak-to-peak magnitude of approximately 100 V and frequency of 1 MHz along with corresponding measured and predicted IEDs for 500 kHz, 1 MHz and 10 MHz.

For all three cases, the peak-to-peak voltage excursion at the electrode is approximately 100 V. A slight distortion of the sinusoidal is seen in a waveform (1 MHz, 100 Vpp) measured at the electrode waveform, shown in figure 3 (a). A simple theoretical frame work was developed to predict IEDs from voltage waveforms recorded on the biased electrode. Measured and predicted IEDs computed using the recorded sinusoidal bias voltage waveform for all three frequencies are also presented in figure 3 (b, c). A comparison between the results shows that the simple model is effective in capturing the shift in the peaks of the bimodal IED as bias frequency is increased from 1 to 10 MHz.

IEDs measured for 20, 100 and 300 V bias voltage levels as well as a grounded electrode are presented in figure 4. The height of the peak decreases with increasing bias voltage. These results clearly demonstrate that by adjusting the tailored waveform voltage level, a narrow IED peak can be produced for any desired ion energy, allowing a greater degree of control compared with the sinusoidal bias. 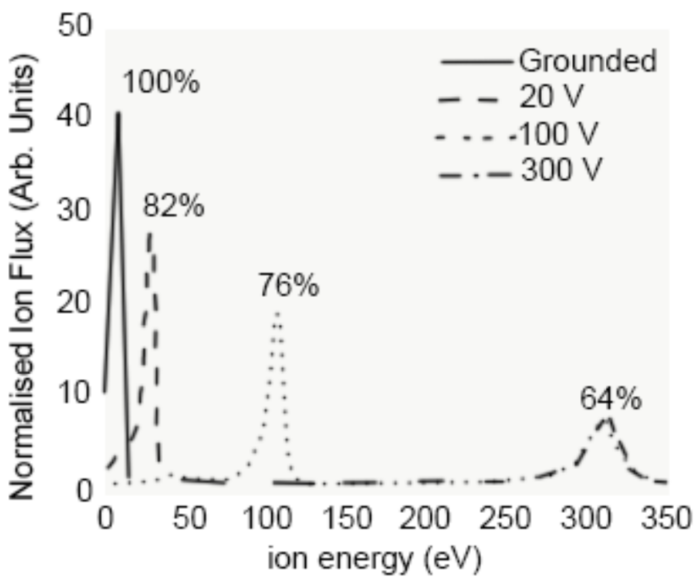 Figure 5 shows the example of the two levels arbitrarily selected to 100 and 300 V along with corresponding measured and predicted IEDs. The model was again successful in predicting the energy and relative ion fluxes in the IED peaks, while it underestimated the peak broadening observed experimentally. Both measured and predicted IEDs show two peaks near the ion energies expected (100 and 300 eV), with a clear progression of ion flux shifting from the 100 eV peak to the 300 eV peak, corresponding to the progression in the relative ratio of the duration of the two voltage levels in the tailored waveform.

It was found that by increasing the applied power, the electron density increase abruptly at a threshold power, suggesting that the E to H mode transition occurs. With the increase of the pressure, the negative ion density presents opposite trends in the E-mode and the H-mode, which is related to the difference of the electron density and energy for the two modes. Also, as the applied power was increased, the electronegativity shows an abrupt drop during the E to H-mode transition.

This work confirms by the measurements of the incident IEDs at an rf-biased electrode in an Argon helicon plasma system that arbitrary IEDs may be produced by manipulating the shape of the bias voltage waveform in the collisionless sheath regime. Results shows decent agreement between the theoretically predicted and RFEA measured IEDs. The ability to manipulate the IED in this way provides a tool not only for optimizing process outcomes, but also a tool to better understand the mechanisms by which the IED affects plasma–surface interactions.