With the knowledge that no investigation of certain key parameters of the plasma during Modulated Pulse Power Magnetron Sputtering (MPPMS) has yet been published, in this study, the authors employed a Langmuir probe to measure temporally resolved electron density, ion density, electron temperature, floating potential and plasma potential during the process.

All experiments were carried out in a stainless steel chamber with a diameter of 400 mm and a length of 600 mm, which was pumped down to a base pressure of 2*10−4 Pa by a combination of a rotary and a turbo-molecular pump. A diagram of the setup can be found below. The Langmuir probe consisted of a tungsten wire (radius rp of 0.05 mm) held at one end in an alumina sleeve within which the connection was made to the external circuit. The length of the tungsten wire exposed to the plasma for collecting the probe current, lp, was between 3.7 mm and 4.2 mm; the tip was located 10 cm from the target and perpendicular to the local magnetic field.

A chromium target was sputtered with an average power of 650 W in an argon atmosphere (0.53 Pa) employing two steps of excitation of the discharge, which was realized by altering the modulation frequency of the voltage supplied to the target. The overall pulse duration was kept at 750 μs and a repetition frequency of 100 Hz was used.

Time-resolved Langmuir probe measurements of a modulated pulsed power magnetron discharge with two-step excitation revealed the presence of three distinct stages: two stable stages exhibiting constant values for all plasma parameters and the transition phase, which showed an elevated plasma density at a slightly reduced electron temperature. Negative plasma potentials could be attributed to a temporal imbalance between the ion current towards the cathode and the electron current to the walls, which makes necessary the ejection of electrons out of the plasma volume. 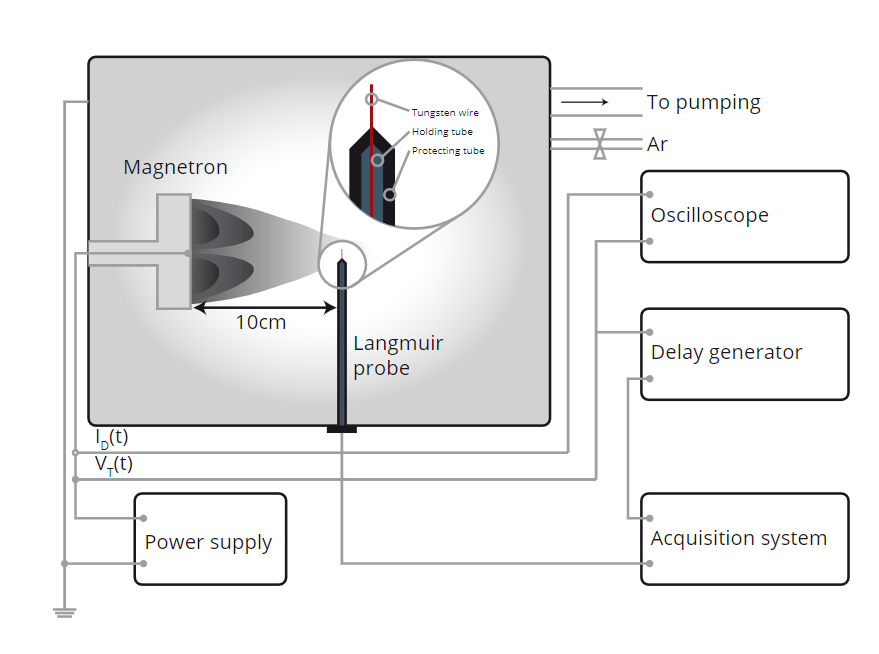