This work presents the first experimental results on an alternative concept for an Inductively coupled plasma source, known as inductively coupled array (INCA) discharge. This design is based on periodically structured vortex fields that can produce certain electron resonances in velocity space. The periodic vortex fields are produced by an array of small planar coils. An Impedans Semion RFEA sensor and an Impedans Octiv VI probe were used to monitor and characterize the plasma performance of INCA. The results provide strong experimental support to the theoretically predicted feasibility and good efficiency for plasma production at low pressure (below 1 Pa) discharge.

A schematic of the experimental setup of INCA including the antenna array and diagnostic methods are presented in figures 1 (a) and 1 (b). The plasma chamber consists of a stainless steel vacuum vessel with inner dimensions of (420 × 420 × 256) mm. The antenna array consists of 6 × 6 small identical planar coils, each coil having a two-turn spiral with an outer diameter of 46 mm. This array is placed in the middle of the reactor, dividing the chamber volume into two separate isolated sections – one for plasma ignition, and the other for housing the antenna wiring and water-cooling system. The 13.56 MHz RF power was applied via a tuneable L-type matching network. 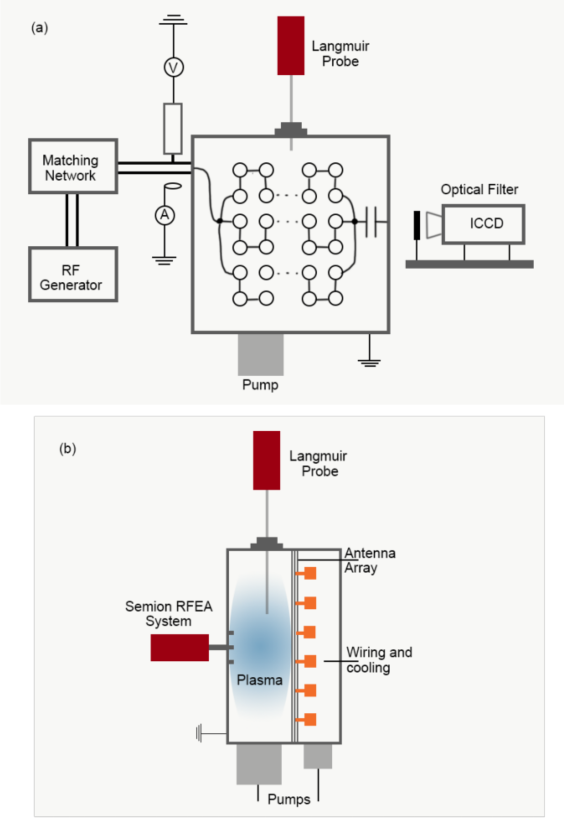 Figure 1. Schematic of the experimental setup showing (a) front view and (b) side view. The dimensions are given in mm. 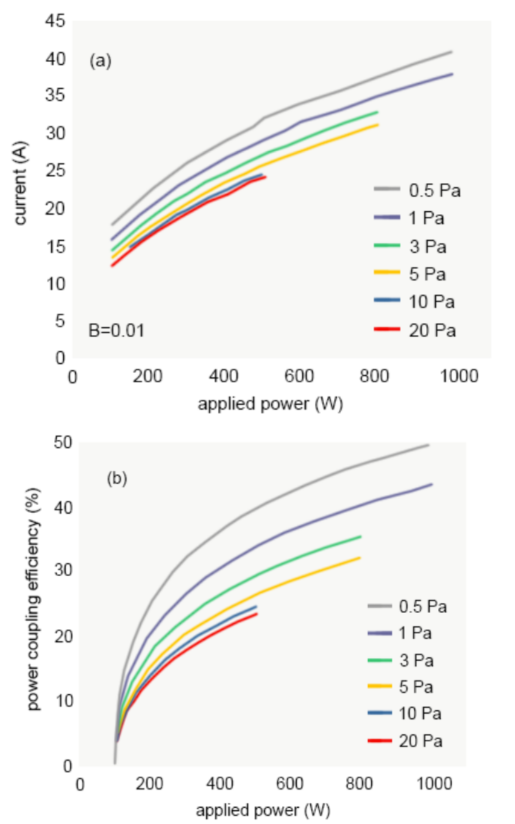 Figure 2. (a) Variation of current through the antenna array on RF power with argon discharge at various pressures. The solid curves are fits of equation (1) to the measured data points. (b) Power transfer efficiency η calculated from equation (2) using the values of the fit parameters from (a).

A novel concept for collisionless/stochastic electron heating and plasma generation at low pressures was theoretically proposed by Czarnetzki et al. (2014). This work successfully provides the first experimental validation of a discharge based on the concept of Czarnetzki.

The measured current amplitude, I, through the antenna array for a discharge in argon is shown in figure 2(a). The current is of the order of a few tens of amperes, which is a typical range for inductive discharges. The current as a function of the power from the RF generator Prf shows a nearly Prf(1/k) dependence. The measurements here show that k = 4. 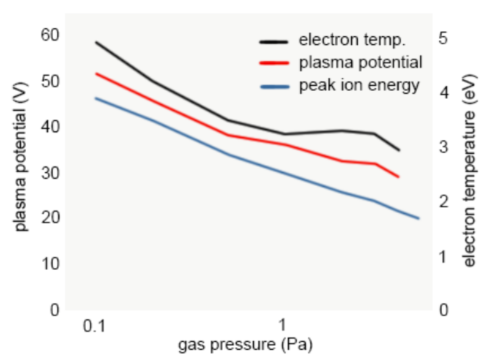 Figure 3. Variation of the electron temperature and the plasma potential with pressure in argon discharge at Prf = 800 W. The energy of the peak in the IVDF is also shown as a measure for the potential drop over the sheath.

Also, the power balance equation (Prf = Pm + Pa + Pp) allows one to determine power delivered by the RF generator from the measured current (here Pm and Pa are the ohmic losses in the matching unit and wires, and Pp is the power absorbed power absorbed by the plasma). It is given as:

The measured resistance of the antenna and its wiring is Rt = 0.6 Ω and the losses, described by Rm, are mostly due to (mechanical) imperfections in the tuneable capacitors. The plasma density in the center scales linearly with the applied RF power n proportional to (Prf – Po), with Po ~ 100 W. This expression has been fitted to the experimental data in figure 2(a). A and B are the fitting parameters and are given in Table 1 below.

Table 1. Values of fitting parameters A and B in Eq. (1) and the corresponding values of Rm.

With these values of above parameters, one can also obtain an estimate for the efficiency of the power transfer to the plasma:

The power transfer efficiencies for the different argon gas pressures are shown in figure 2(b). Clearly, the efficiency increases with the RF power. More interestingly, the efficiency also increases with decreasing pressure. This is related primarily to a reduction in the power losses in the matching unit (lower values of Rm in table 1). It could even be speculated that the better power coupling efficiency at lower pressures is a direct consequence of the increased performance of the stochastic heating.

Figure 3 shows the pressure dependence of the plasma potential and electron temperature (measured using an in-house Langmuir probe) and peak ion energy (measured using Impedans’ Semion system) at 800 W Prf. A decreasing trend can be seen for all parameters with increasing gas pressure. The unusually high plasma potential and the energy distribution functions of the ions at low pressure, clearly indicate the presence of super energetic electrons (energies of about several tens of eV). These results provide strong experimental indications for the existence and efficiency of the theoretically proposed novel stochastic heating mechanism.

This work reports the first experimental results on the investigation of the INCA discharge, wherein the plasma is created by an array of 36 small inductive coils producing periodic vortex fields. The performance of the discharge is characterized using Impedans’ VI probe and Semion RFEA system and comparison was made with theoretical predictions. It is demonstrated that such discharges exhibit stable operation at pressures around and below 1 Pa. Enhanced power coupling efficiency at low pressures is observed. Most notably, the plasma potential and the corresponding mean ion energy show clear evidence of the presence of super energetic electrons, attributed to stochastic heating. Overall, these results provide strong experimental indications for the existence and efficiency of the theoretically proposed novel stochastic heating mechanism.