The study focused on the plasma measurement of parameters to explore the assistance of the electron cyclotron wave resonance (ECWR) on the evolution of HiPIMS discharge, where it has several benefits.

There is great interest in HiPIMS since it enables efficient film tailoring, even on complex-shaped surfaces. It requires time resolved plasma measurement to fully explore the plasma regime.

Generally, microstructure and crystallography depend on many deposition parameters. A structural zone diagram (SZD) has been proposed to reduce the number of parameters to those most significant and to illustrate their effect clearly. The key variables influencing film formation are internal plasma parameters such as pressure, plasma potential, ion distribution function and ion flux.

Typically, HiPIMS discharges provide ions of sputtered atoms with energies of up to ~60 eV hitting the substrate. At low pressures, the HiPIMS plasma does not usually develop fully or is not ignited. A pre-ionization that provides a seed of charge can ensure HiPIMS discharge maintenance at reduced pressure.

The plasma pre-ionization may be obtained in several ways. In this work, the assistance of the electron cyclotron wave resonance (ECWR) effect during HiPIMS was employed. ECWR assistance allows the pressure to be reduced down to p=0.03–0.05 Pa. This reduced pressure means the plasma parameters are different in this hybrid configuration from common HiPIMS.

The main focus in this study was the effect of ECWR support on HiPIMS plasma properties, investigated by a combination of time-resolved diagnostic methods, including a Langmuir probe and Semion RFEA. 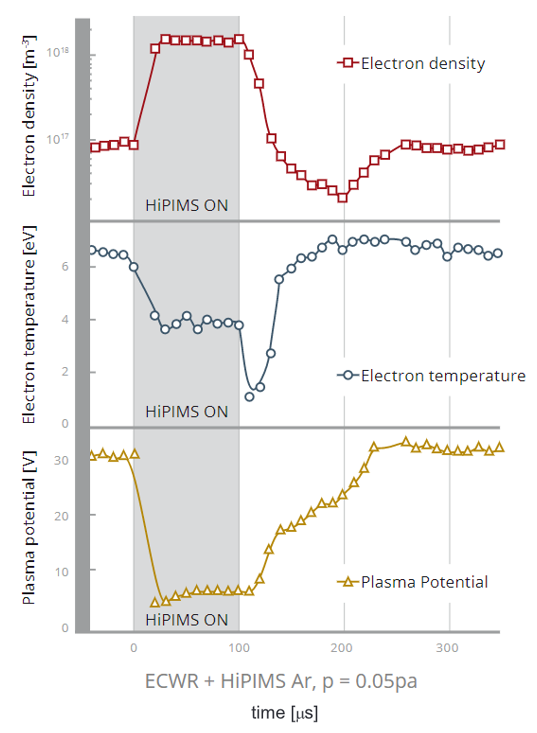 Figure 1: Time resolved measurement of the electron density, electron temperature and plasma potential. The pressure is 0.05 Pa. The ECWR plasma pulse repeat rate is 100 Hz, with a HiPIMS pulse of 100 μs is applied during the plasma pulse.

The HiPIMS electrical circuit consists of a commercial dc-power supply VDC with a range up to -1kV designed for continuous operation and used for charging large capacitors CH in combination with a pulsed power switch.

The HiPIMS discharge was operated with a repetition frequency of f=100 Hz and a pulse width of 100 μs, i.e., with a duty cycle of 1%. The ECWR-HiPIMS facility was mounted on the bottom flange of the UHV chamber, evacuated by a turbo-molecular pump down to the ultimate pressure of 10-7 Pa. Argon, employed as process gas at a flow rate 10 sccm, was inserted into the chamber via a slit between the magnetron cathode/target and the shielding/anode to enhance the sputtering effect.

ECWR assistance allows the authors to decrease pressure during the HiPIMS process down to p=0.03 Pa – at least one order of magnitude lower than is typical for HiPIMS discharges (minimum pressure at which a HiPIMS discharge can be sustained in our experimental configuration was p=0.85 Pa). Various time and spatially resolved methods were applied to investigate the properties of the ECWR-HiPIMS discharge. The spatially resolved Langmuir probe measurements were achieved by moving a sensor/probe in the axial direction; i.e., in the coordinate z. The coordinate z represents the magnetron’s axis where z=0 mm is the target surface.

Figure 1, shows the time resolved measurement of the electron density, electron temperature and plasma potential. The pressure is 0.05 Pa. The ECWR plasma pulse repeat rate is 100 Hz, with a HiPIMS pulse of 100 μs is applied during the plasma pulse.

The electron temperature is high during the ECWR discharge and drops during the HiPIMS pulse due to the ionization of sputtered metal atoms. The electron temperature is higher in the HiPIMS pulse than normally seen without ECWR. This is a positive effect that enables enhanced ionization due to electrons and ionization of sputtered species, for example, carbon during DLC deposition.

A further drop in electron temperature occurs after the HiPIMS pulse ends due to diffusion cooling by electrons leaving the plasma. As the electron density drops heating with the ECWR again returns the temperature to a higher value typical of such a plasma. The time evolution of the plasma potential is also shown in figure 1. 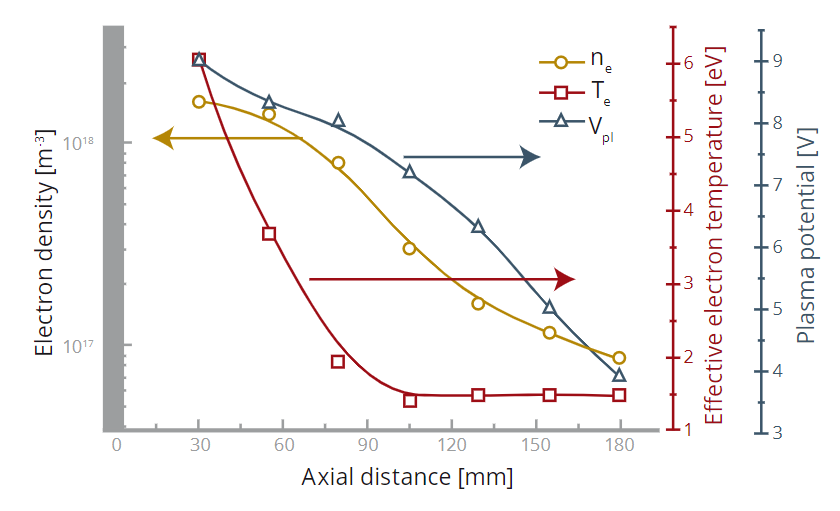 Figure 2: Comparison of axial dependencies of electron density (left axis), effective electron temperature, and plasma potential (right axis) of the ECWR-HiPIMS discharge. The values presented were measured in the middle of the pulse, i.e., at ta=50 μs, pressure in the chamber p=0.05 Pa, and fH=100 Hz. The target surface is placed at z=0 mm.

Figure 2 shows the key plasma parameters measured by the Langmuir Spatial Probe along the axial direction. The electron density and electron temperature increase dramatically as the center of the plasma chamber is reached. 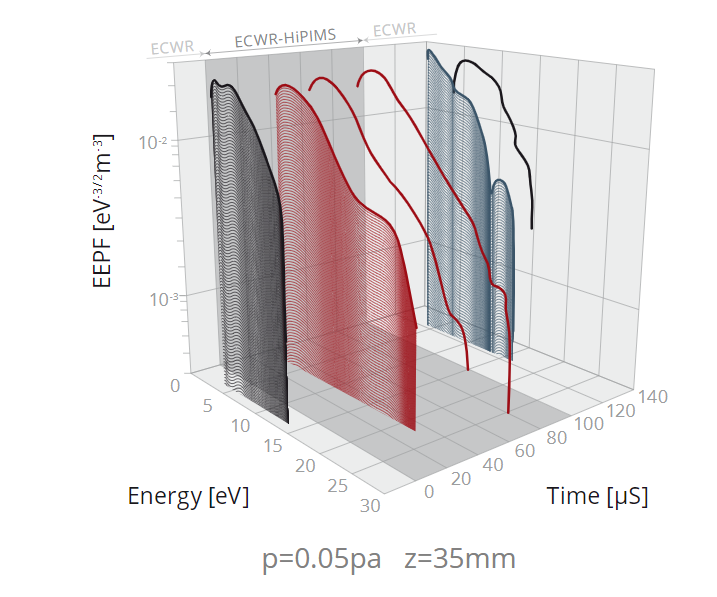 The electron energy distribution is a crucial parameter and was determined using the time resolved Langmuir Probe from Impedans. 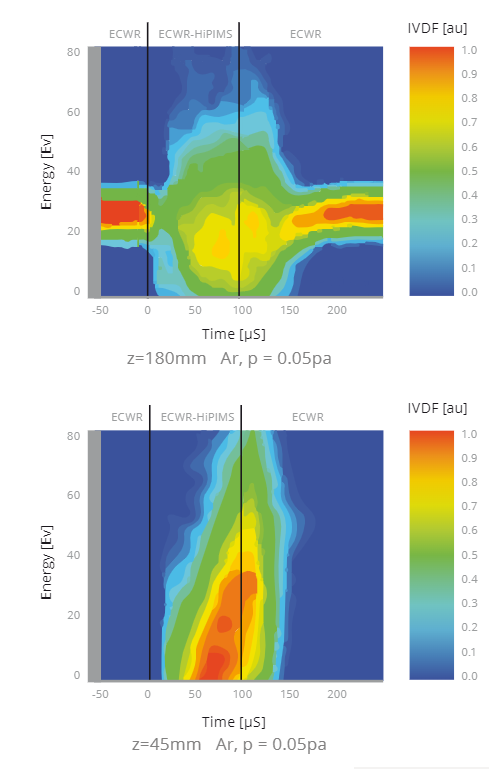 Figure 4: Time-resolved measurement of ion velocity distribution function measured by a retarding field analyser at distances z=180 mm (upper panel) and z=45 mm (lower panel) from the target. The IVDF is expressed as a colour bar and the data are normalized to the maximum value. The pressure was p=0.05 Pa.

Figure 4 shows the time resolved ion energy measured using the Semion RFEA. Clearly, the ECWR provides Ar ions with a narrow energy distribution of about 30 eV. The HiPIMS pulse causes ion energies to spread over a much greater energy range with the energy tail reaching 50-60 eV. At z=45 mm from the target the ion energies higher as expected. An important fact is the ion energies increase linearly with time during the HiPIMS pulse reaching energies of 80 eV.

The key benefit of ECWR assistance in HiPIMS discharge evolution is a pre-ionization effect that allows:

• Significant pressure reduction (in this case down to 0.05 Pa)

• Faster development of the discharge current and electron density. These reach their maximum value of about 10 μs after the pulse onset and remain constant afterwards.

• The sputtering and ionization processes are enhanced due to low pressure, high plasma density and electron temperature. This results in nearly total ionization of the sputtered species, with a significant fraction of double charged Ti++. The mean free path of metal ions is comparable with the distance target-(potential) substrate position. The double-charged ions can therefore reach the substrate with high energies of up to ~180 eV.