In this study, the authors investigate the sputter etch rate of SiO2 in this type of reactor as a function of ICP and RF-bias power. The key parameters measured were the ion energy distribution (IED), ion flux and sputter etch rate.

It is well known that ion bombardment of the wafer is a key driver of the etch process. However, there are relatively few studies that have attempted to correlate the shape of the ion energy distribution directly with the etch rate. Here, the IED is measured with the Semion system and the other important plasma parameters are measured with the Langmuir probe system over a wide range of discharge conditions.

An ion-enhanced etching model is developed to identify the relationship between the measured parameters. A novel method is presented which can be used to control the ion bombardment energy, ion flux and etch rate.

The experimental setup is shown in figure 1. An industrial plasma etch tool is used which has an ICP source consisting of an inner and outer coil. The match output is split into two to supply power to both coils.

Current flowing through each coil is measured, the ratio of which is used as an additional control parameter in the experiment. An Impedans Langmuir probe located in the centre of the discharge, approximately 30 mm above the wafer surface, was used to measure the bulk plasma parameters. The probe tip was made of Tungsten with length 9 mm and diameter 0.39 mm. The Semion retarding field energy analyzer was mounted in the center of the wafer on the RF-biased pedestal. The sensor diameter was 50 mm and had a thickness of 5 mm. 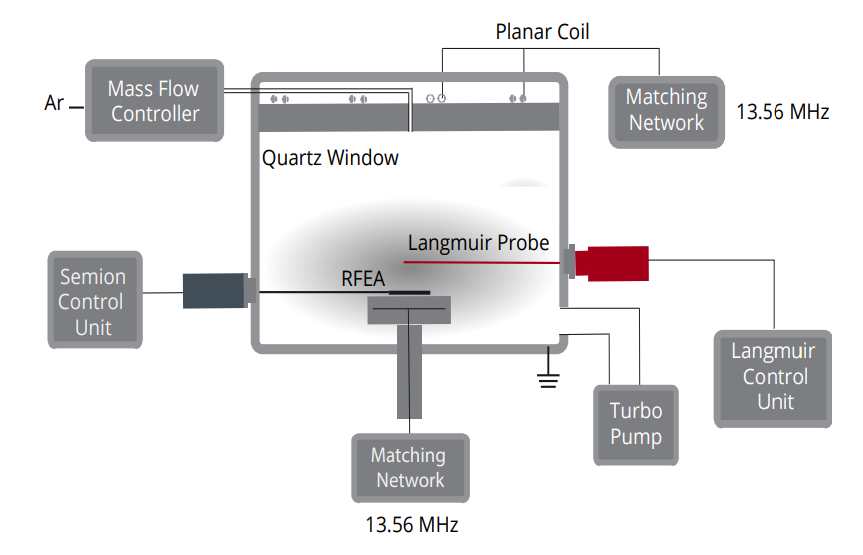 The experiments were carried out at a discharge pressure of 20 mTorr where it was found that the ion mean free path was approximately 4 mm. The maximum sheath width encountered was 1.6 mm. Therefore, the sheaths are collision less and the ion transit time is close to the RF-bias period. The ion transit time is given by

Where ne is the electron density in the bulk plasma and kTe is the electron temperature. An expression for the peak separation of the ion energy distribution in this so-called intermediate frequency regime is given by

Equation 4 was solved using the Langmuir probe measurements and used to confirm the validity of the experimentally measured IEDs.

An ion-enhanced etching model, for calculating the sputter etching rate, was also presented. It is noted that this model is applicable to ion energies less than 1000 eV

Where C is the ion etch yield coefficient for SiO2 and εth is the sputter etching threshold energy (18 eV for this material).

IED measurements for varying ICP power (fixed coil current ratio) and grounded pedestal are examined initially. For this condition the IEDs exhibit a narrow, single-peaked shape. The ion flux increases with increasing power, at fixed discharge pressure, while the ion energy remains constant. When the coil current ratio is increased there is a corresponding increase in the ion energy accompanied by a decrease in the ion flux as shown in figure 2. 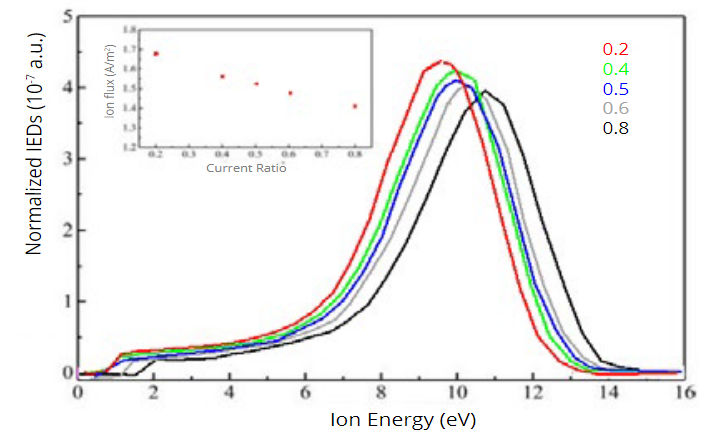 Figure 2: Normalized IEDs plot as a function of coil current ratio at the grounded electrode. 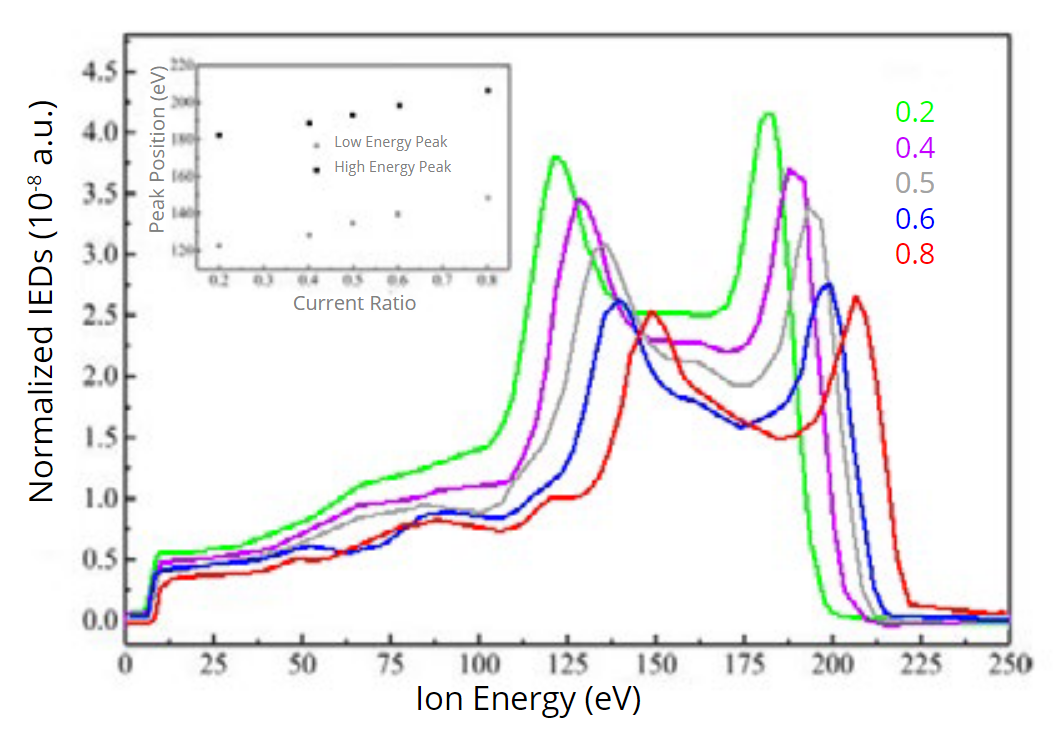 Figure 3: Effect of current ratio on the normalized IEDs. 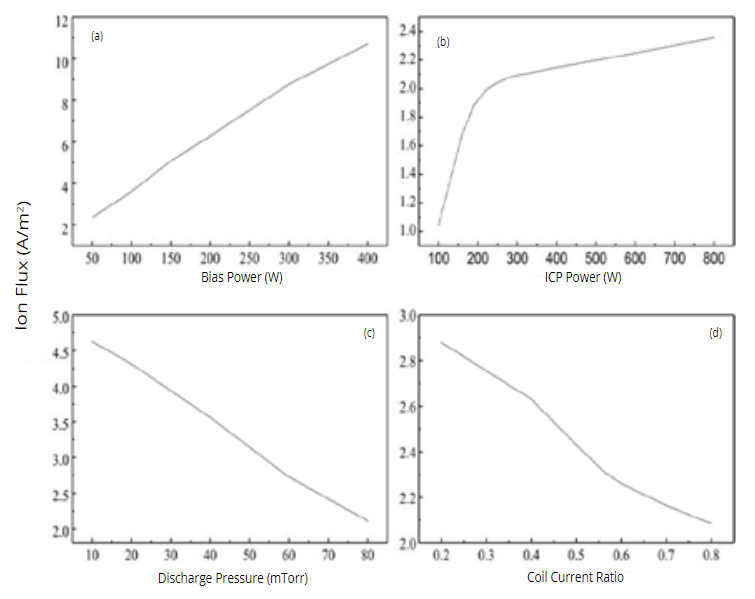 Figure 4. The measured ion fluxes plot as function of discharge conditions. (a) is the biased power, (b) is the ICP power, (c) is the
discharge pressure and (d) is the coil current ratio. 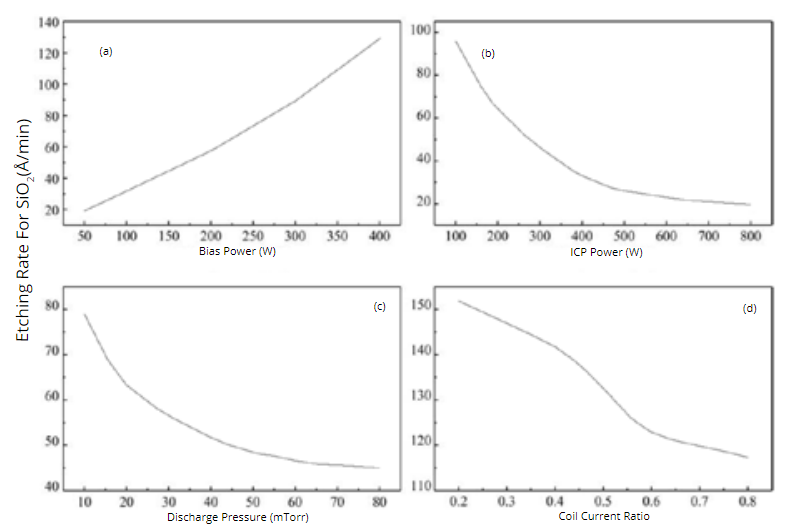 The Impedans Langmuir probe and Semion systems were used to study the ion energy distribution, ion flux and sputter etch rate of SiO2 in an industrial ICP reactor with RF-biased pedestal for various discharge conditions. The data allowed the user to carry out a detailed correlation between these measured parameters and etch rates. This gives insight into how the etch rate can be finely tuned in this type of reactor.