In the last 20 years, unipolar and bipolar pulsed magnetron sputtering have become important techniques in industrial deposition. These pulsed magnetrons are classified according to their repetition frequency and absorbed power in the pulse, namely mid-frequency magnetron discharges (MF) and high power impulse magnetron sputtering (HiPIMS) systems. This study introduces a hybrid-dual-HiPIMS system based on the simultaneous combination of dual-HiPIMS and MF discharges. The main body of the study is the time-resolved diagnostics taken during the deposition of Ti–Cu films, revealing the degree of assistance made by the MF discharge.

A Semion Retarding Field Energy Analyzer was placed at the substrate position, 5 cm from the target, to take in situ and time-resolved ion velocity distribution function (IVDF) measurements of positively charged ions. The Semion analyzer consisted of a series of grids located behind a sampling aperture. The first grid was electrically connected to the body. The second grid was biased negatively (in relation to the first grid) to repel electrons that may enter. The third grid was swept to provide the ion retarding potential and the only ions detected on this grid were those with energies higher than the sweep voltage.

The Illustration below shows the time-resolved IVDFs measured for hybrid-dual-HiPIMS discharge. The values presented for ion energy are related to plasma potential, as defined by time-resolved Langmuir probe measurements performed at the same time. 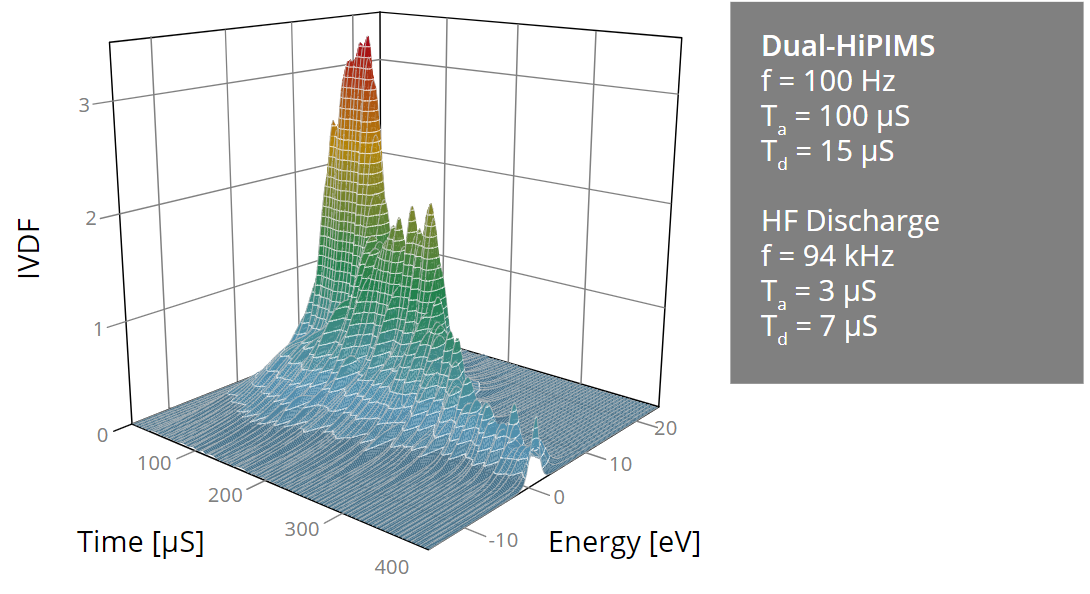 Figure 1a: 3D Representation of time resolved measurements of IVDFs for a hybrid-dual-HiPIMS discharge with Cu-HiPIMS driven 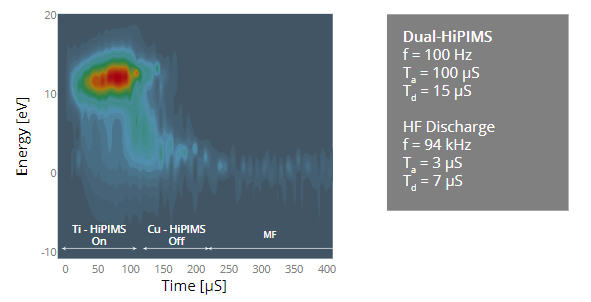 The following graph shows the time-resolved IVDF measurement during transition between HiPIMS and MF discharges. The results show that during active Ti-HiPIMS pulse, the IVDFs are nearly identical with measurements presented in the graph above. Some high energetic ions (~12 eV) were also measured after the end of the HiPIMS pulse, which were deemed to be caused by ambipolar diffusion movement. At the same time, however, a low energy (5 eV) IVDF peak was also seen. 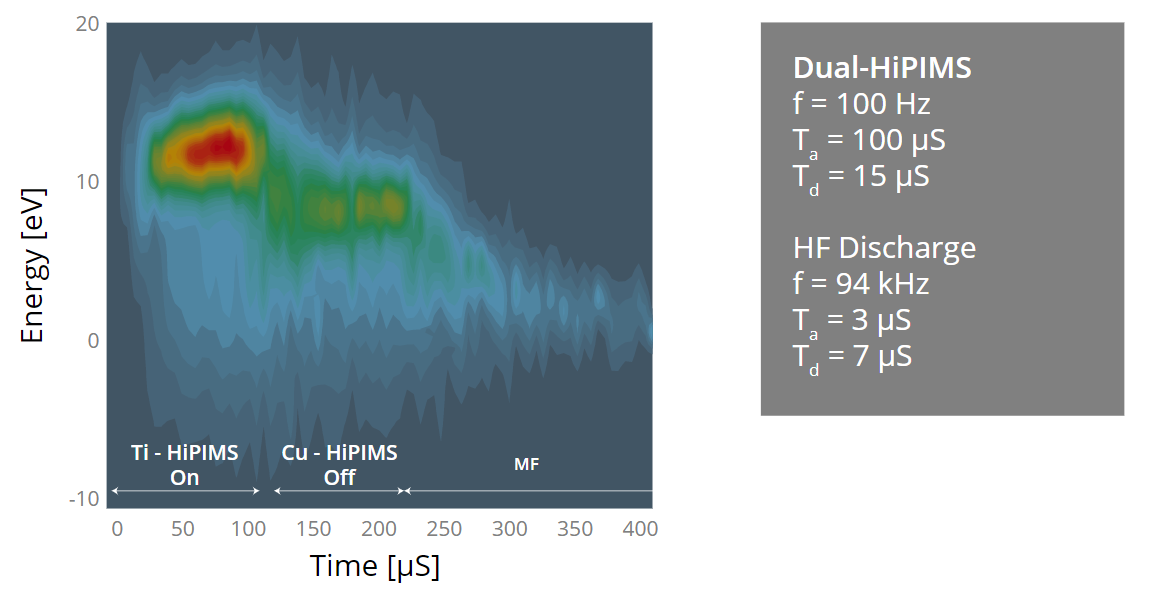 The study found that the IVDF during HiPIMS pulses reaches a maximum of about 15–20 eV, while the dual MF discharge gets up to about 0.5–1.5 eV. The time-resolved IVDF measurements show that ions with high energy from the cathode get to the substrate position about 25–30 μs after the HiPIMS pulse ignition. The MF discharge gives a pre-ionization effect that supports the reignition of HiPIMS pulses.

The hybrid system was found to have a notable effect on the deposition of Ti–Cu films. The combination of the pre-ionization effect and low-pressure operation resulted in massive ionization of the sputtered particles. This subsequently influenced the crystallographic phase and the properties of deposited films.